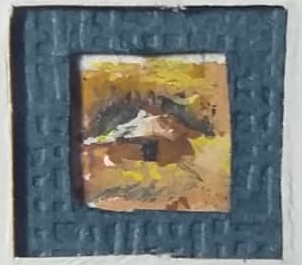 That breezy Saturday in Lagos, a Lagos-based Nigerian artist and art educator, Michael Fasakin was in the midst of artists gathered for a live painting experience in the Surulere neighbourhood when he broke a piece of news exclusively to THISDAY. “I think I just made one of the world’s smallest piece of paintings.”
The painting, a 0.5cm-square piece, which can only be viewed with the aid of a microscope, came into view as he scrolled through the images on his phone. His decision to do this phenomenal work was not a spontaneous action.
Flashback to 2008 when Fasakin just graduated from the Yaba College of Technology, he was eager to learn more and polish his painting skills.

“I had enjoyed the tutelage of Dr. Kunle Adeyemi with whom I worked as a student assistant and I got the baptism into printmaking,” he recalled. “Printmaking is also an area that I delved into and at a point, I have been to Bruce Onobrakpeya’s studio which has always been a wonderful time. Incidentally, I always had conflicting schedules with the Harmattan workshop so I have never been there. I even got an invitation from Baba Bruce [Onobrakpeya] himself and he said, ‘Don’t worry even if you are not going to pay, we will give you a rebate.’ I owe the Harmattan Workshop a visit.”
Though he teaches visual arts in a private secondary school, he dedicates some quality time to painting. Recently, he noticed that his vision was diminishing. To make something great out of the depressing condition, he decided to put the eyes to test.

“I asked myself, ‘How far can I strain these eyes? Before then, I had not gone for any testing to know whether I needed a pair of glasses or not. To put it to test, I decided to paint something very small.”
He went on the internet to see other existing small paintings. Eventually, he settled into his studio and in three days, the ‘little’ project was completed.

“I did one in water colour, another in poster colour and I wanted to do 0.5cm square painting. When I was painting, it looked bigger. But then, you will need a magnifying lens to see the work. Each time people discover what is on the tiny painting, they will say, ‘You are mad. How did you paint it? Meanwhile, it was after I had finished painting that I got a magnifying lens to see what I had done. Even a blind man can paint. I just knew that the patches of the colours would form something. I wanted to paint a landscape but then I thought that would be a very difficult thing to do. It turned out to be an abandoned hut so I called the title, “Ahere Di Ahoro’’ (loosely translated as a deserted hut). It means the hut which is a place of work for the farmer has become an abandoned property. As Nigerians, we need to go back to agriculture. That is the message in the work. It is not just to beat the existing records but also to pass a message,’’ he explained, as the sounds of blaring horns interplayed with his voice.
After he finished the amazing painting, he went for an eye test. He was told that he would be required to wear a pair of eyeglasses. His reaction was quite hilarious.

“Thank God I did some painting with my bare eyes. I have never loved putting on glasses. We grew up knowing that it was undesirable for anyone to wear a pair of glasses,’’ he said to his bespectacled reporter-guest who made effort to keep a straight face. “When I saw the ophthalmologist, he told me I ought to have been using the glasses before now. I can’t just read for long. If I try it, it will blur. I can see colours, long distance except if there are other definitions to colours.”

Fasakin had his first solo painting at the Yaba College of Technology in 2016. He is currently working on another solo exhibition scheduled for next year. He has been part of several group exhibitions and had served at the Lagos Chapter of the Society of Nigerian Artists (SNA) as the assistant secretary in 2004. He explained why there seemed to be a delay between his last solo show and the next.

“Due to the change in jobs, I couldn’t prepare in time for it because I didn’t want to be giving excuses to my new employer,” he explained. “Art is jealous. If you embrace art, you will refrain from any other thing. It will not be long before you will discover that you are not putting in your best as an artist. There are artists that use their day off from regular jobs to paint. The job that is paying you can take more time if you are not careful.”
Speaking on the influences on his artistic style, Fashakin acknowledged the roles played by many leading artists in Nigeria especially his former teachers.

“Within Nigeria, I have found very inspiring artists. Bruce Onabrakpeya’s works sometimes fascinate me. Given his age, I think he has such energy and vigour for the art. I have been mentored by a lot of artists and I will not want to start mentioning names, so that I don’t omit any.”