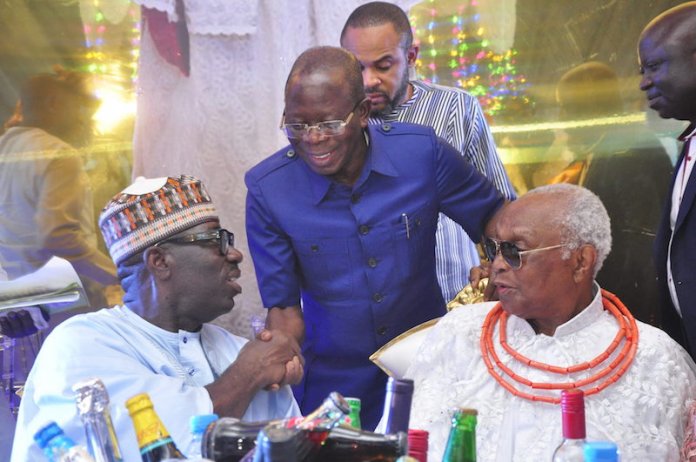 The National Chairman of the All Progressives Congress (APC) and former governor of Edo State, Comrade Adams Oshiomhole, has challenged his successor in office, Governor Godwin Obaseki, to substantiate his allegation that he was under pressure to share state funds by naming and exposing those who asked him to do so.

In an interaction with some journalists in Abuja at the weekend, Oshiomhole explained how he had involved some of their mutual friends, including billionaire businessman, Alhaji Aliko dangote, governors, and a minister to try to mend fences with Obaseki. He alleged that the effort was bungled by the governor, and insisted that he had nothing personal against Obaseki but was only seeking his success in office.

Oshiomhole also dismissed allegations that the feud between him and the governor was being compounded by rumours about the possibility of treating Obaseki to a similar fate as the immediate past governor of Lagos State, Akinwunmi Ambode. Ambode was the first civilian governor of the state to be denied a second term ticket.

The APC chairman accused Obaseki of taking advice from “merchants of confusion”, who are keen on feasting on their disagreement. He said with such characters around the governor, the possibility of restoring good relations with him seemed distant.
Oshiomhole stated, “Let me also say this, it is absolutely incorrect for the governor to say anybody asked him to share money. If he insists, let him mention the name. But what I have advised him is that, reconstitute the boards; let people become board members.

“The only way we can win elections is to show presence across the 192 wards in Edo State. I believe there is still enough time for the governor to make up by encouraging in good faith, the peace effort that many of our mutual friends had offered so that we can give everybody a sense of ownership of the government. The beauty of democracy is that when you have elected a government, you will say this is my government.”

Giving details of how he had invited Dangote and others to mediate in the feud, Oshiomhole said after the opposition began to use the “five star hospital” he built while in office as a tool of attack, because the governor would not open it for business, it became clear to him that he had to do more to engage Obaseki.

He said apart from building a beautiful edifice at the hospital, which was commissioned by President Muhammadu Buhari, he engaged a competent hand, a Professor of Medicine at the University of Benin, to superintend the procurement process. His government also engaged Vamed Engineering Nigeria Limited, a renowned company manufacturing hospital equipment, in the contract, Oshiomhole said, yet Obaseki still left it shut down.

“Meanwhile, the equipment are there with warranty and whether you open the hospital or not, those warranties are running and if they run out and tomorrow you have a problem, you need another money to buy equipment or to repair the old one.
“Aliko Dangote, God will bless him. He told Godwin that if he builds a factory and locks it up for two years, the grease will dry up, the oil will dry up and you will invest a lot of money to service the machines before they can be operated. Not to talk about sensitive hospital equipment. He now told the governor to go and open the hospital.

“I get bashing everyday, because people believe there is nothing inside. And I am no more the governor, so, I cannot go there to defend myself. I live with this pain, even though, I did my best to provide that facility to the people of Edo State and, indeed, Nigerians, who are in Edo and may need medical care.”

In spite of Dangote’s intervention, Oshiomhole said Obaseki did not open the hospital, even as the opposition continued to pick it as a major case in their allegation of inefficiency against the APC government.
He continued, “When the governor refused to open the hospital after I complained to Dangote, I asked the company to do a documentary on all the equipment at the hospital and I placed it on different television stations, including Channels. When people saw that, then, public opinion changed.
“Then rather than open this hospital in obedience to public outcry, they decided to set up an inquiry by the Speaker (Adjoto), who is aggrieved, because he lost the House of Representatives ticket to Peter Akpatason, who is an incumbent lawmaker.

“Based on his open bitterness, he was encouraged by the state government to set up this panel to rubbish themselves. And then they removed all the documents from the Ministry of Health to give the impression that the construction was a verbal transaction.”
Oshiomhole also spoke about the interventions of some governors and a minister, who tried to reconcile him and the governor.

He said, “The last time we had a meeting with Governors Bagudu, Fayemi, El-Rufai and Niyi Adebayo, we all agreed that the way to go, given the divisions in Edo APC, is to have an all-inclusive meeting. We need to meet in a room and resolve our differences and come out for people to know that APC is one. You cannot solve problem without talking.

“The governors encouraged him to meet with me so we can arrange the meeting. In fact, the governors offered to accompany us to Edo State to hold meeting with all the groups so that we can iron out our differences. Unfortunately, as we speak, the governor has refused to convene that meeting.

“We have to work now on how to get such a meeting on, because there is no way to solve such a problem without reaching out to the aggrieved parties. Let me assure you that this governor is not under threat.

“It is those who are making money from the crisis, those I call merchants of confusion; they are only relevant when there is a fight. They are the ones that will tell the governor they want to impeach you. But the governor should ask himself what has done to deserve impeachment.”
Dismissing allegations that Obaseki feared he might be given the Ambode treatment, Oshiomhole stated, “Who told him that? What will I gain if Godwin does not run a second term? Is Oshiomhole going to run a second term?

“If I did what I did to support him to be governor; whether he acknowledges it or not, but people know what I did to support him, what comfort will I have if he is terminated half way? What is Ambode treatment? But let me tell you, Ambode treatment is not the worst treatment we have seen in the APC. What about M. Abubakar’s treatment in Bauchi?
“He won his primaries and as a sitting governor, he lost the election. What about Adamawa State? Because of internal fighting, the sitting governor lost. Though we are hopeful in both cases that the court will give us victory, because we think we won the elections. The point to me is that tickets are not the issues in politics.

“I think the real issue in Edo State is that anyone that loves the governor should do what we tried to do; what those governors tried to do by reminding him that a divided house cannot stand. And the house remains divided if we do not make conscious efforts to bring everybody together.
“So, what I am doing is to encourage him and all our leaders to have an all-inclusive meeting of all APC leaders. Lock the door and speak truth to ourselves.” The former governor said anything outside this could spell doom for the party in the state.

“What is simply happening is that there are people, who think their access to bread and butter will end if there is peace, and so, they encourage the governor wrongly. I have had meetings before where I urged the governor to carry people along. Whether you like it or not, if there is one business where one tree cannot make a forest, it is politics,” he said.