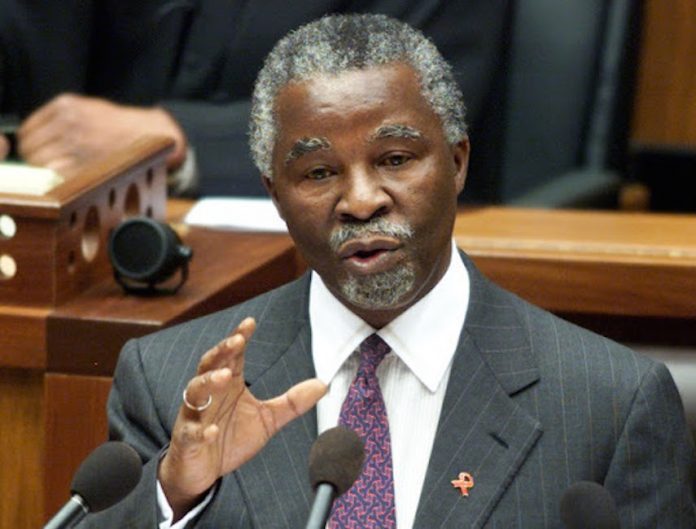 Recent statements by former South African President, Thabo Mbeki, denying the targeting of Nigerians and other Africans in the latest wave of xenophobic attacks in South Africa, should come as no surprise to anyone familiar with his career as a public administrator.

As a leader, Mr. Mbeki has a long and tragic history of denialism. His standard reflex in moments of crisis was always to bury his head in the sand, while reality hovered perilously all around him.

Throughout his time as President of South Africa, Mr Mbeki strongly denied the existence of HIV/AIDS, and used every State institution to frustrate or stop the sale and distribution of antiretroviral drugs to HIV-positive South Africans.

As part of his so-called ideological battle with “Western” science, Mr Mbeki alarmingly prescribed the consumption of “African” beetroot to those ravaged by the AIDS epidemic.

The disastrous toll of Mr Mbeki’s intransigent AIDS policy on the fabric of South African society is still the subject of research and tabulation by experts around the world.

But according to a 2008 report by researchers in Harvard University, Mr Mbeki’s antiretroviral denialism led directly to the deaths of  over 300,000 HIV- positive South Africans.

The report also found that 35,000 HIV-infected children were born during the period in South Africa, because Mr Mbeki rejected vital drugs that could have prevented mother to child transmission of the disease.

As South Africa erupts in yet another xenophobic violence, Mr Mbeki is back to lead the  choir of deniers.

As someone who attended and taught in South African universities for the better part of a decade, I can say without a doubt that not all South Africans are xenophobic.

But there is an increasingly virulent strain of xenophobia in sections of South African society that is impossible to ignore. It is visible and dramatic enough in the streets of South Africa to cause a sense of moral panic.

Rather than confront the problem, Mbeki and other leaders of the African National Congress (ANC) are staging an escape from this unglamorous truth about South Africa.

For those who may be genuinely confused about the dialectical meaning of “xenophobia” in the context of the latest attacks, let me explain.

It simply means that there is an identitarian dimension to these killings and attacks. Foreigners (particularly Africans from other countries) are killed and their shops looted because they are foreigners in South Africa.

So these are not ‘general’ crimes, there is a clear particularity to the killings. Foreign Africans are the target, because they are seen as a “problem”.

A sub-set of this xenophobic sentiment is the “criminalization” of the Nigerian identity. Mr Mbeki actively promotes this dangerous stereotype by referring specifically to “Nigerian drug dealers”

But there are South African, Tanzanian, Namibian, Zimbabwean, American, Pakistani, and other drug dealers and criminals in South Africa. Why not fight criminality through vigorous intelligence gathering and convictions in the courts?

Why is Mr Mbeki endorsing the hateful and indiscriminate jurisprudence of the streets?In addition to his chronic denialism, Mr Mbeki seems to have also lost his sense of irony.

As anti-apartheid refugees, Mr Mbeki and many of his ANC colleagues lived in Nigeria for many years, and were supported with State funds. Mr OliverTambo, the leader of the ANC at the time, traveled around the world on a Nigerian diplomatic passport.

The truth is that South Africa owes Nigeria and the rest of Africa a moral debt that it can not repay.

As the Buhari administration considers its response to the plight of Nigerians in South Africa and elsewhere in the world, it must resist the temptation of cheap or violent reciprocity.

Nigeria’s best response must be to finally rise to the challenge of building a just,equitable and prosperous nation.

Brizy: Focus is an Important Factor of Success