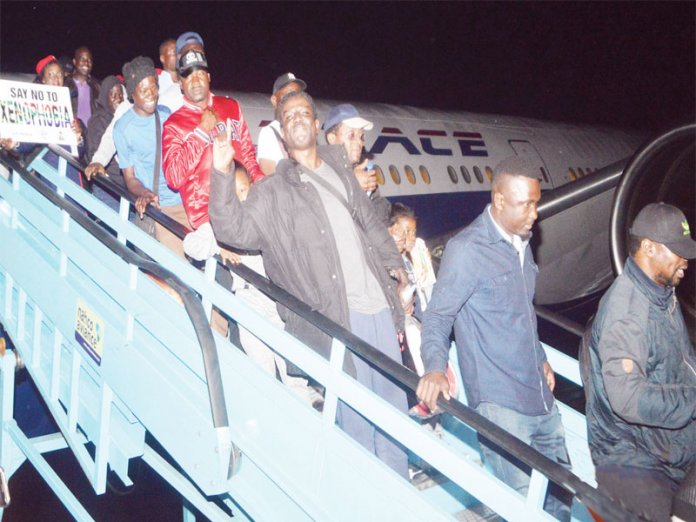 Chinedu Eze in Lagos and Adedayo Akinwale in Abuja

South Africa authorities wednesday frustrated the evacuation of many Nigerians who were among the first batch to be airlifted from that country, THISDAY’s investigation has revealed.

Air Peace, the largest Nigerian airline in terms of volume of passengers, facilitated the evacuation of 187 Nigerians living in South Africa for free in response to renewed wave of xenophobic attacks in parts of Johannesburg.

This is coming as the federal government has revealed that the second batch of Nigerians, numbering 327 are expected to be evacuated from South Africa on Friday.

The 187 Nigerians, about 30 of whom are children, were airlifted from the OR Tambo International Airport in Johannesburg around 3.00p.m South African time, after hours of delay caused by biometrics capture.

Many of them said they had been living in fear for their lives as the attacks continued to escalate on a daily basis.

Nigerian Consul-General to South Africa, Godwin Adama, who met with the Air Peace evacuation team at the OR Tambo airport prior to departure back to Lagos, said over 900 Nigerians had been registered as at Tuesday.

The Air Peace crew had expected to evacuate 320 passengers in the first flight wednesday, but 187 people were eventually evacuated because South African authorities frustrated the efforts of many others to leave the country.

THISDAY gathered that out of the 320 Nigerians who indicated interest to leave the country yesterday, only 187 were allowed to board the Air Peace flight as South African’s Immigration officials embarked on the arrest of others, accusing them of entering their country without valid papers.

Many Nigerians who wanted to be evacuated were accused of entering South Africa, without complete documents.

“These Nigerians are excited and they want to go back because they feel they can do something better in Nigeria,” Adama said.

He also clarified that no Nigerian life was lost during the recent xenophobic attacks.

While most of the violence was concentrated in the areas with large population of poor people, attacks mostly focused on burning and looting of businesses and property belonging to foreign nationals from different African countries.

“Some of the videos you see on social media are old videos and some didn’t happen in South Africa,” Adama said.

He also disclosed that about half of the Nigerians returning did not have proper documentation, hence the Nigerian mission in South Africa had to provide an Emergency Travel Certificate.

However, the passengers were informed by the Consulate that they wouldn’t be able to go back to South Africa unless they get the right documentation.

“The issue here is there is negative perception about foreigners. SA has the highest rate of crime, not less than 20 people are murdered in this country every week. It is a volatile society, there is this feeling of insecurity in SA,” he said.

The Nigerian government sent an envoy last week to South Africa to formally register their displeasure with the security of African nationals. The envoy accompanied by the Consulate, also held a meeting of African ministers aimed at bringing the violence to an end.

“By yesterday we have to be calling people to be sure they are going on the Air Peace flight. We demanded for consent letters to accept any lady with children who are not travelling without their husband. We have accommodated quite a number of them to make sure they join us,” Adama said.

Air Peace officials said the airline plans to fulfill its promise of evacuating all the registered passengers first yesterday and a second flight today. The Air Peace flight P47806 is one of the latest fleets in the airline’s possession. It has a maximum capacity of 364 passengers.

“We commend Allen Onyema, the Chairman of Air Peace for this great gesture. It is indeed a one of its kind,” Kimiebi said.

Meanwhile, the second batch of Nigerians, numbering 327 are expected to be evacuated from South Africa on Friday.

Ebienfa, in a short statement issued yesterday, noted that the returnees would be received on arrival by senior officials of the ministry.

According to him, “Three hundred and thirteen Nigerian Nationals are ready for evacuation today; 640 registered; second batch to be evacuated on Thursday or Friday.”