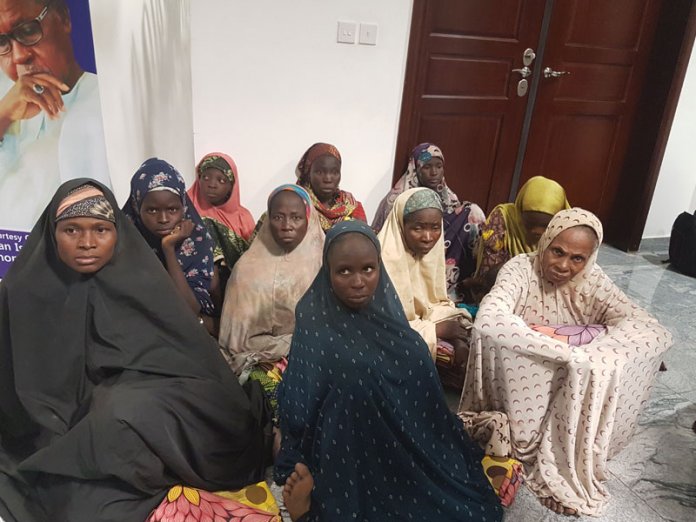 Repentant bandits in Katsina State have again released 10 women including a nursing mother with her three-month-old baby as part of the ongoing dialogue between them and the state government.

The hoodlums had last Sunday released five kidnapped persons in their custody, bringing the numbers of those who have so far regained freedom from the abductors to 15 in the state.

The 10 victims, who had been in captivity for more than three weeks, were kidnapped on their way to Shinfida village in Jibia Local Government when security officers escorting them from Jibia town to the area were ambushed by the hoodlums.

The freed women, who looked sickly and hungry, were brought to the office of Governor Aminu Bello Masari on Tuesday at about 7.30 p.m by two representatives of the outlaws.

Receiving the victims, Governor Masari said the state government’s dialogue with the leaders of the bandits has started yielding positive results considering the level of cooperation he received from them.

He however directed the Transition Committee Chairman of Jibia Local Government, Mr. Haruna Musa, to take the victims to Jibia General Hospital to examine their health conditions before they would be reunited with their families.

Masari said: “We started the peace process since we started meeting with leaders of the bandits at their locations. They promised us that there are certain leaders of theirs that if we release them, they would release our people under captivity in the forest.

“They started last Sunday by releasing five and we are able to release seven of their people that are being detained in Kano, Kaduna and here in Katsina.

“We are happy to receive 10 females today (Tuesday) detained by the bandits. We have directed the chairman of Jibia Local Government to take them to Jibia General Hospital to examine them before they are finally taken to their village.”

Asked what the government is doing to free the remaining captives, Masari said: “The herdsmen have given us list of their 18 people that are there awaiting trial.

“We will check those under detention with the police, DSS and those in prison custody. So long as they are not convicted, we will work out modalities of releasing them so that the rest of our people under their custody would also be released.”