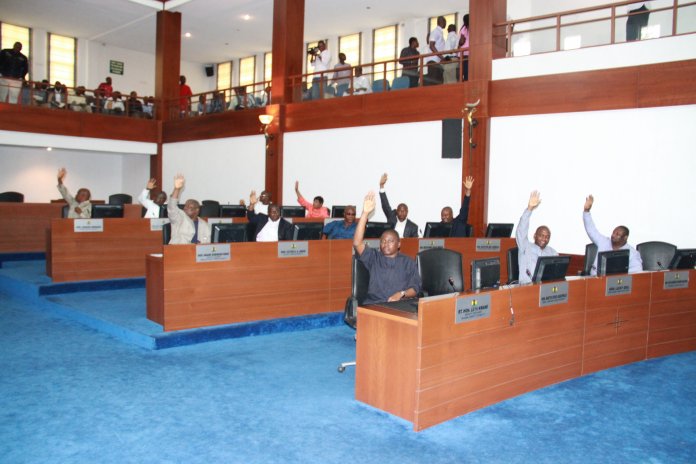 Members of the National Assembly from Rivers State on Monday took to the streets in protest against the deplorable state of the element section of the East-West Road.

Led by the Senator representing Rivers South East senatorial district in the National Assembly, Barinada Mpigi, the members, who carried placards, marched through some parts of the road before stopping at Aleto/Akpajo Bridge at Eleme.

They lamented the deplorable state of the ever-busy Aleto/Akpajo bridge, stating that the bridge has become very dangerous not just for commuters who on a daily basis ply the road to neighboring Akwa Ibom and Cross River States, but to oil and gas business operators who equally ply their trade at the Indorama Eleme Petrochemical Company, Refineries and the seaport at Onne in Eleme Local Government Area of the state.

Addressing journalists, leader of the protest, Senator Mpigi, said: “We are here to draw the attention of the federal government to the deplorable condition of this road (East-West) and the bridge. You know that almost everything that Nigeria has is within us here-two refineries, petrochemical industry and of course, the oil and gas free zone.

“You see that the bridge is shaky, and there is the tendency that any moment from now, the people from this area will be cut off from this country.

“One question we must ask is ‘are we really part of this country or not? Are we enjoying our taxpayers’ money or we are not? The truth is that we have been abandoned and neglected.”

He said the lawmakers decided to embark on the protest to tell Nigerians that “we have been totally cut off from all we are supposed to gain from this country.”

Mpigi noted that “contract for this road had been awarded to RCC as we are aware. Just to execute and release the fund meant for this road is the impediment now; it’s like we have been abandoned. It’s not about increasing funding or not because there has been an existing budget and allocation for this road for a long time.

“We want the job to begin immediately. Once that has been done, we as members of the National Assembly can come back and talk about appropriation because the contract has been awarded and work started, but now there’s a halt.

“The value of the contract to our knowledge was over N2 billion within the Ogoni-Akwa Ibom axis up to the Eleme Junction, but the value, for now, is not known.”

In his own address, member representing Obio/Akpor federal constituency, Hon. Kingsley China, said: “Those of us in the National Assembly have severally protested against the treatment of our people particularly concerning this bridge. We know that this place is the spine of this country. If the country is serious with oil and gas, then the importance of this bridge cannot be overemphasised.

“All the refineries, petrochemicals company, and fertilizer company are all here, including Onne Sea Port and Naval Training School. To access these places, you need to go through this road.

“But because this is Rivers State, as usual, there is graveside silence to issues that pertain to us. That is why, having brought a motion on the floor of the National Assembly, members have supported that the Executive arm should quickly ensure that this bridge is taken care of to forestall incidence that might lead to loss of lives of Nigerians.”

Inaugurating three roads, Bonny Street, AdakaBoro/Elliot Henry Streets as part of the first 100 days of his second term yesterday, Wike said he would soon flag off the construction of the bridges.

The proposed flyover bridges are to be located at Garrison, Artillery and Rumuokoro in Port Harcourt and Obio/Akpor Local Government Areas.

Wike and engineers had earlier assessed the approaches and ending of the proposed flyover bridges last weekend.

He said: “We will soon commence the construction of three flyover bridges in Port Harcourt and Obio/Akpor Local Government Areas.

“These three flyover bridges would be constructed simultaneously and we shall deliver them in 16months. We will remain committed to the delivery projects for our people.”

Wike said he considered the opportunity given to him to lead the state as a rare privilege, which he will never take for granted.

According to him, “The opportunity that Rivers people gave to me to lead them is a privilege, which I will never take for granted. I will do everything to protect the interest of Rivers State. I will never sell the state to anyone.”

He said his administration would continue to work towards the restoration of Port Harcourt as the country’s Garden City.

“We must keep Port Harcourt clean. People should not block the streets. I am happy that we are keeping the city clean,” he said.

Commenting on the three roads, the governor also directed the installation of street lights to fight crime in the area.

The Permanent Secretary of the state Ministry of Works, Dr. Walter Ndu, said the three roads span 2.8 kilometres, adding that with the construction of the roads, the economy of the area has been revived.

He said the three roads were constructed in line with approved specifications and design.