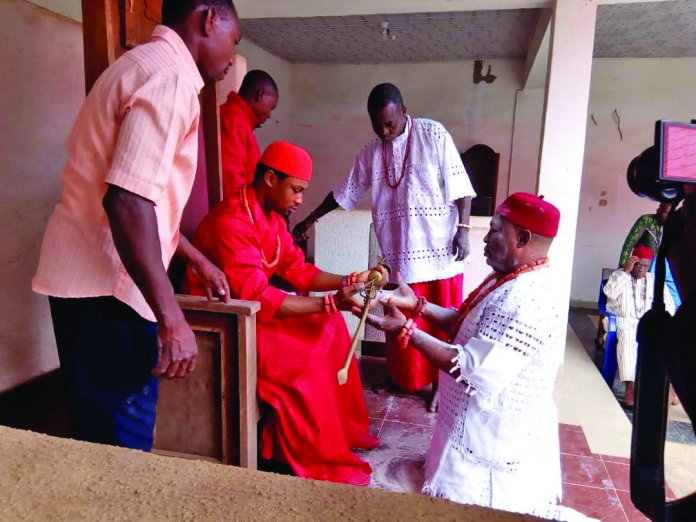 The third edition of the Annual Inne Festival of Issele Uku in Aniocha North Local Government Area of Delta State which comes up from the 14th to 19th of September this year promises to be grand and more fascinating than it used to be. It is the third official outing for the young, handsome, and amiable King of Issele Oligbo kingdom, HRM Obi Agbogidi Nduka (MNSE). Adequate preparations are being put in place to showcase the festival as one of the best tourist attraction and something that could go for as a historical documentation.

A member of the publicity committee festival, Mr. Chas Uju Nwam, said: “The Inne Festival is an occasion where all the titled chiefs of the town will dress in the best of their chieftaincy regalia with their traditional dance group from their domain, dance to the king’s palace to pay their annual homage to the king, the Obi of Issele Uku, HRM Agbogidi Obi Nduka (MNSE).”

“The usual traditional celebrations kicked off during the first week of August and will run till the end of October 2019. This year’s Inne festival will be a conspicuous improvement on the Inne festivals of the previous years because unlike in the previous years, this year’s Inne festival will hold for 5 days to attract more tourists and sponsors and will within these 5 days, feature activities like inter village traditional dancing competitions where all the 9 villages of Issele Uku will come out in their dancing groups to compete among themselves. A cash reward of the sum of Three hundred thousand, Two hundred thousand and One hundred thousand naira respectively awaits winners of the first, second and third positions.”

“As expected, there will be so many consolation prizes up for grabs. So we are calling on all sons and daughters of Issele Uku both at home and in Diaspora to key into these lined up of traditional programmes to make this year’s Inne festival, the third edition after Obi Nduka’s coronation a huge success,” Nwam said.

According to the Director of Finance of the Inne Festival Committee, Engr. Frank Mordi, a retired director in the Federal Ministry of Communications, “Issele Uku as a town has so many things to thank God for this year. Apart from the fact that the town was recently connected to the national grid through the individual efforts of the sons and daughters of Issele Uku, the amiable king who just came back from America has promised that part of the reason for his visit to America was to rob minds with his subjects in America on how to attract foreign investors to his domain in order to create jobs and empower the unemployed youths.

“The king, a highly cerebral culture icon has insisted that every aspect of Issele Uku culture would be followed in details. According to him, culture is the people’s way of life and a people without  culture is like a tree without roots, adding that Issele Uku people are known to be loveable, peaceful and hospitable and that should be the watch word of all his subjects at all times.”

He added that he is particularly happy that all the awards and cash earmarked for all categories of winners were individual donations from sons and daughters of Issele Uku, and that as we celebrate, we should not shy away from showcasing the rich culture and tradition of Issele Oligbo in a joyous atmosphere.

Meanwhile, the security committee has been mandated to come up with strategy to curtail criminal and sinister activities during and after the five days of the festival. They have been asked to activate the involvement of all security agencies within the local government to ensure peace and order while the festival lasts.

On the issue of instilling peaceful atmosphere when the Obi enters his solitude mood (Iba Nzu) the week preceding the Inne Festival, a group known as the Ndi Isekwute has been asked to organize themselves against the task ahead of the festival. Usually, this group of palace boys goes about town killing fowls wherever they perceive noise during this period. However, they have been cautioned not to be overzealous in carrying out this assignment but to caution people by giving them orientation on the need to avoid noise making anywhere within the town during this one week Iba Nzu period of the Obi, and to play the role of monitoring and ensuring that there is no noise in the town, rather than applying punitive measure of killing fowls outrightly as deterrence.

In all, this year’s action filled five days Inne Festival promises to be a turning point where elegance, culture and tradition will combine with opulence and royalty.  This will be something that all the invited guests, visiting tourists, culture and tourism ambassadors, visitors, journalists and stakeholders will be proud to be part of.

Ekiti to Teachers: Resign if You Can’t Work in Rural Areas

Solskjaer May Field Youngsters Against Sociedad