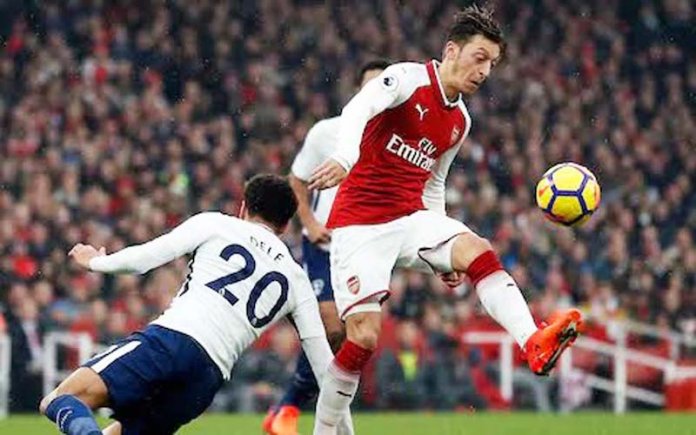 After recording their best start in the Premier League in almost a decade-two wins in two games, Arsenal fell like a pack of cards against Liverpool at Anfield last weekend while Tottenham Hotspurs against all odds, lost 0-1 at home against Newcastle. Both teams, therefore, would want to make up for lost grounds in the first North London Derby of the season on Sunday. Beyond that, the supremacy as to who really owns London is always at stake

Arsenal will host Tottenham in the first north London derby of the 2019-20 season with the rivals looking for a much-needed return to winning ways. Both the Gunners and Spurs were on the end of dispiriting defeats last weekend, with Mauricio Pochettino’s men slipping to a shock 1-0 home defeat to Newcastle last Saturday.

Arsenal followed that up with a 3-1 loss at Liverpool which laid bare the fact that Unai Emery’s defence is still very much a work in progress.

Neither manager can afford a derby defeat before the international break, so expect a tense atmosphere in north London.

Arsenal’s first dropped points of the campaign have taken some of the wind out of Emery’s sails, and while his attack shows plenty of promise, they have scored just four goals in three games – fewer than the likes of Burnley and Norwich.

Spurs have struggled to break teams down this season, with a gritty 3-1 home win over Aston Villa hinting at the problems which exposed themselves once more against Newcastle.

Sunday’s match should be a cagey contest, but a draw is the most likely outcome. Tottenham will want Arsenal to have plenty of the ball and then hit Emery’s men on the break, and Arsenal will want the same thing of Spurs.

Meanwhile, Tottenham attacker, Lucas Moura has claimed that Spurs will prove their quality in Sunday’s North London derby against Arsenal.

After registering four points from games against Aston Villa and Manchester City, Spurs’ progress in the Premier League was halted by a 1-0 defeat to Newcastle United last weekend.

However, while Pochettino’s team have underperformed during the early weeks of the season, Moura feels that a showdown with rivals Arsenal has come at the perfect time.

The Brazilian told the London Evening Standard: “Is this the perfect game for us to have after the Newcastle defeat? Yes. We need to look forward now. There are a lot of hard games to come.

“We lost against Newcastle but I am sure we have the quality to go to Arsenal and come back with three points. That’s what we must try to do. Each game is different. This is a new season and we have new players. I think we are stronger now. I am sure we can go anywhere and win games.”

Spurs sit in the seventh position in the standings, two points behind Arsenal ahead of the trip to the Emirates Stadium.

Arsenal have won the majority of these meetings, with 82 victories and 52 draws to Spurs’ 64 triumphs.

The last time Spurs beat the Gunners away from home was last December in a 2-0 EFL Cup win but their last Premier League victory at Arsenal was back in 2010.

Arsenal won 4-2 at the Emirates last December, with the return fixture a 1-1 draw at Wembley in March.

Defending champions, Manchester City will take on Brighton and Hove Albion today at the Etihad Stadium.

Graham Potter has done a remarkable job till now with the Seagulls, but there can only be one favourite when his side lock horns with the Citizens.

Pep Guardiola’s nearly perfect side are looking favourites for the title once again. After a 5-0 victory against West Ham United, their onslaught came to an abrupt halt when Tottenham Hotspur held them to a 2-2 draw. But after a convincing victory against Bournemouth, the Citizens are back on track once again.

Brighton, too, had a great start to their season, winning 3-0 away at Watford. They held a formidable West Ham United side to a 1-1 draw, but were found out last week when Southampton handed them a 2-0 defeat at the Amex Stadium.

When Brighton last faced the Blues in May, they were handed a 4-1 thrashing. Sergio Aguero, Ilkay Gundogan, Aymeric Laporte and Riyad Mahrez scored for the visitors. Earlier that season, City edged past with a 2-0 victory, thanks to goals from Raheem Sterling and Sergio Aguero.

It will be nothing short of a miracle if Potter’s men are able to get a draw against the defending champions at the Etihad, let alone a victory.

Guardiola’s side have scored 10 goals in only three games so far. Hence, there should not be any shortage of goals at the Etihad Stadium today.

Manchester City’s attacking duo has been amongst the goals so far. While Sterling has netted five goals, Aguero has found the back of the net four times.

Meanwhile, Manchester United visit the South-Coast tody to take on Southampton who are a team on the rise under Ralph Hasenhuttl.

Fortunately for the Old Trafford club, they have been given a boost before their trip to St. Mary’s Stadium as key Southampton man, Nathan Redmond, is ‘likely’ to miss the game against United after he picked up a knee injury.

Redmond is arguably Southampton’s most important attacking player. The Englishman is mega-talented, though sometimes inconsistent, but he’s always liable to turn up and have an outstanding game.

The fact that he’s missing definitely strengthens United’s case at winning all three points, though that Red Devils defence simply has to be better than last time out, while up top, the onus will be on Marcus Rashford.

United shouldn’t go there and underestimate their opponent, and if they don’t this is a winnable game for Ole Gunnar Solskjaer and his players. Hopefully, they can go out there, get the job done and bring three points back to Old Trafford before the international break.