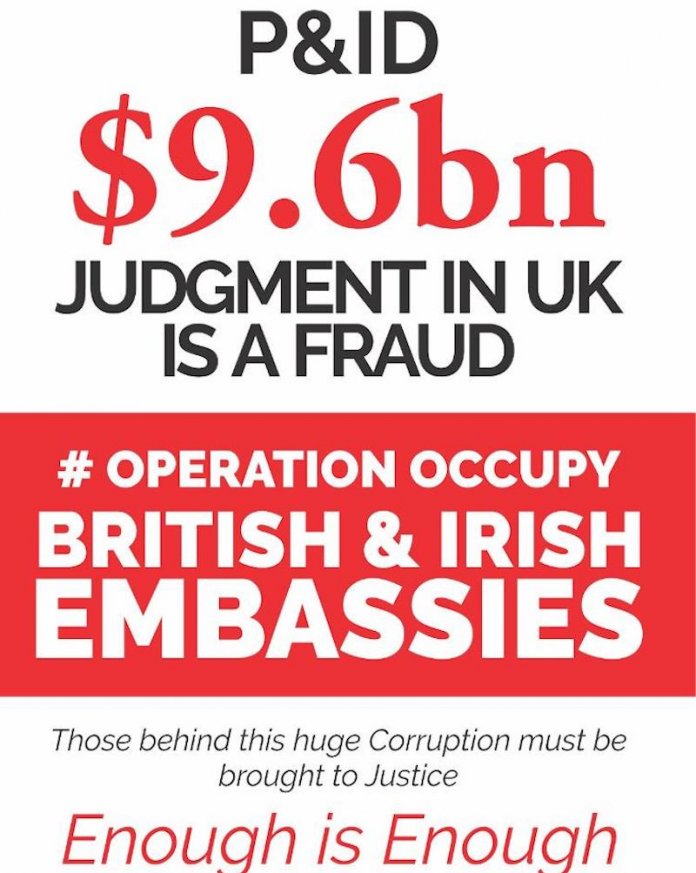 Coalition of Civil Society Groups has announced plans to occupy British and Irish Embassies in Nigeria for one week beginning on Monday, September 2, to protest the $9 billion judgment debt awarded by a British court against Nigeria in favour of an Irish company, P&ID.

A commercial court in the UK had ruled that Nigeria must pay an Irish firm, Process and Industrial Development Limited (P&ID), a sum of $9.6 billion or have its assets to the tune of that amount forfeited.

The judgment arose from a 2010 contract Nigeria signed with P&ID, to the intent that the Irish company would build a gas processing plant to refine natural gas (wet gas) into lean gas that Nigeria would receive free of charge to power its national grid.

The agreement however suffered a setback in 2013 and P&ID won a $6.6bn arbitration case against Nigeria. Last week, a UK court ruled that Nigeria must pay the firm $9.6bn or have its assets to the tune of that amount seized by the firm. The federal government has said it would appeal the UK court judgment.

Announcing its plans to protest the judgment by occupying the British and Irish embassies in Nigeria, the Coalition of Civil Society Groups, an umbrella body of over 500o civil society groups in Nigeria, in a invite to all executive members signed by its National Secretary, Mallam Ibrahim Abubakar, said the protest will be for one week with a call for the reversal of the court judgment.

Below are some of the flyers of the planned protest.