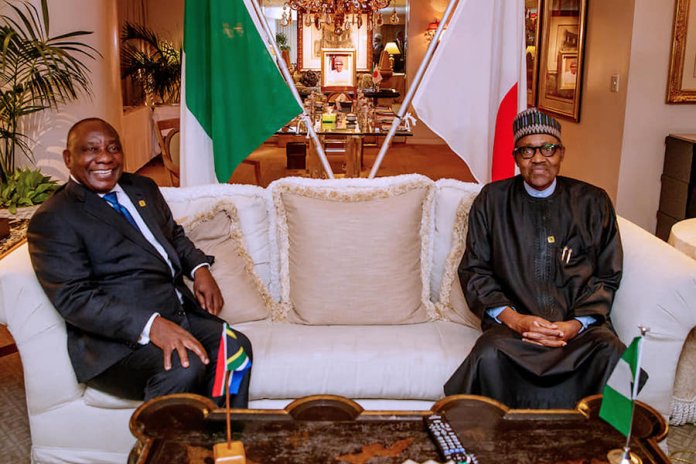 By Omololu Ogunmade in Yokohama, Japan

The President of South Africa, Cyril Ramaphosa, Wednesday in Yokohama, Japan, said his government was very upset about the protracted killings of Nigerians in South Africa, noting that the trend had necessitated the call for a meeting of the leaders of both countries on how to promptly nip the matter in the bud.

Ramaphosa made this disclosure while answering questions from journalists after holding a bilateral talk with President Muhammadu Buhari on the sidelines of the ongoing seventh Tokyo International Conference for Africa Development (TICAD7) in Yokohama.

Nigerians in South Africa have over the years become victims of xenophobic killings by citizens of their host countries who often unjustifiably accuse them of robbing them of job opportunities in their own countries.

These protracted killings prompted some Nigerian students to recently stage a range of protests in the corporate offices of South African companies in Nigeria, threatening to shut them down if the killings of their fellow citizens in South Africa do not stop.

However, the South African president disclosed Wednesday that his country’s justice system had already taken up the matter, pointing out that he was not in support of the killings, and insisted that there was no justifiable reason for anybody to be killed.

He described the meeting he had with Buhari as a good forum for both South Africa and Nigeria to renew the bond of unity between them and simultaneously share together issues of common interest in the overall interest of the African continent.

“Well, no, no, we are going to be discussing all that because we have very good relations. We ‘ll talk about the issue of Nigerians who are dying in South Africa.

We feel very upset about that.

“Obviously, our criminal justice system is working on it. We don’t support killings. Nobody should ever be killed, but it’s also good to use this opportunity here in Japan to renew the bond between us, to talk about common things between South Africa and Nigeria. We know we have to play key roles in the overall development of the continent,” Ramaphosa said.

In another development, the President of Benin Republic, Mr. Patrice Talon, also met with Buhari on the sidelines of TICAD7 to plead with the latter to reopen Nigeria’s borders with Benin Republic which had been shut by the federal government as a decisive measure to curb smuggling of foreign rice into the country.

The meeting which held behind closed doors at the Royal Park Hotel, was attended by Nigeria’s Minister of Foreign Affairs, Mr. Geoffrey Onyeama.

Speaking with Nigerian journalists after the meeting, Onyeama disclosed that Talon expressed concern over the degree of hardship the closure had caused his citizens and pleaded with the Nigerian leader to reopen it.

According to Onyeama, the border was closed because of the frequency of rice smuggling into the country through the borders, pointing out that the president saw the unwholesome development as a threat to Nigeria’s pursuit of food sufficiency.

Onyeama said: “They were discussing the issue of the closure of the border. You may not know but Nigeria closed border with Benin and it is causing great difficulties for Benin. So, the president said he had to see our president as a matter of urgency and because of the great problem that it is causing.

“They talked about the reason for the closure which essentially was about smuggling across the borders especially rice smuggling and Mr. President is extremely concerned that now that Nigeria through our agricultural policies has become self-sufficient in rice production; that this is now threatened.”

But the minister said the Nigerian president, following the concern expressed by his Benin Republic counterpart over the plights of his people as a result of the closure, promised to reopen the border in future but did not tell him the exact date he hopes to do so.

Onyema also said both leaders resolved to formally hold a meeting over the matter after returning to Africa along with the President of Niger Republic with a view to officially reaching a joint agreement on how to end smuggling across Nigerian borders.

The minister further disclosed that the decision to close the borders was the fallout of a concrete search for a total end to smuggling across Nigerian borders.

Onyeama added that the president believed that smuggling across the borders must be decisively dealt with particularly at this moment when Nigeria is no longer depleting its foreign reserves to secure foreign exchange for rice importation.