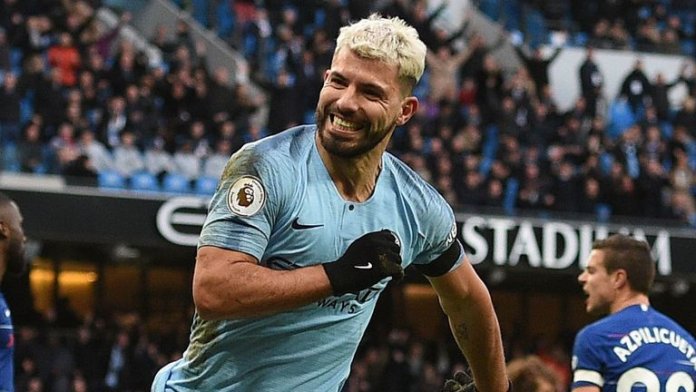 Sergio Aguero scored twice as reigning champions Manchester City moved up to second in the Premier League with a convincing 3-1 victory at Bournemouth.

That second goal took Aguero’s career tally to 400 for both club and country.

Despite the odd defensive lapse, it was a largely comfortable afternoon for Pep Guardiola’s side, who are now two points behind leaders Liverpool.

And Raheem Sterling doubled their advantage with his fifth goal in as many matches, flicking a shot beyond Cherries keeper Aaron Ramsdale after a fine David Silva pass.

The 31-year-old emphatically finished from 10 yards to record his 400th career goal.

It ensured Bournemouth, who drop to 10th place, continued a miserable run against City that has seen them concede 28 times in their last nine league meetings.

If Sterling and Aguero were responsible for City’s goals, it was the 33-year-old Silva who set the tone for their victory in his 400th league appearance for the club.

While Sterling, 24, who scored his 11th goal against the Cherries, represents City’s future, Silva almost 10 years his senior, is in his final season in Manchester.

But this performance showed his enduring ability to carve open opposition defences – a talent that has underpinned a trophy-laden period – is still as priceless as ever.

Nicknamed ‘Merlin’ by the club’s supporters, the 2010 World Cup winner initiated City’s opening goal with a couple of neat passes to spread the ball wide before Aguero dispatched the simplest of finishes.

Aguero’s first-ever professional goal came at the tender age of 16 for boyhood idols Independiente against Estudiantes in a 2-2 draw for the Avellaneda, on November 26, 2004.

He went on to hit 23 goals for his first club before moving to Atletico Madrid in 2006, where he would notch another 101 in five seasons for the Colchoneros.

Operating in the space between midfield and attack, Silva swivelled to receive possession and delivered a sublime pass into the path of Sterling in one motion, allowing the England forward to poke the ball past Ramsdale from six yards.

His control looked to have drawn a penalty from Jefferson Lerma, however VAR deemed there was not enough evidence to overturn the original call from referee Andre Marriner not to award the spot-kick.

Not that it mattered. Moments later Silva collected the ball on the left of the Cherries’ penalty area and weaved away from two defenders before the ball broke to Aguero, to seal victory.