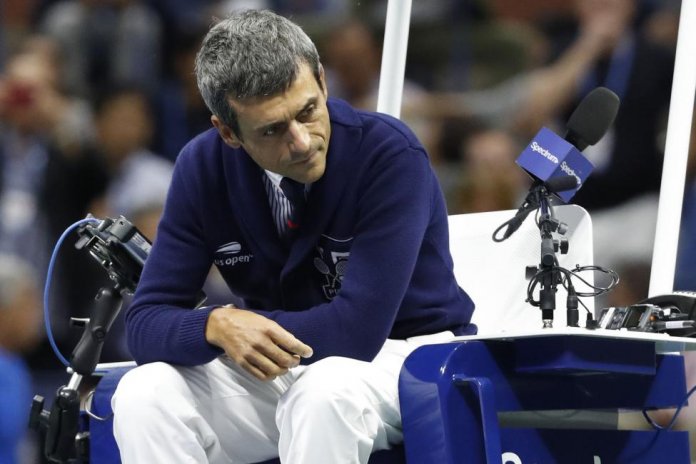 Carlos Ramos will not umpire any matches involving Serena or Venus Williams at this year’s US Open, tournament officials have confirmed

She was also handed a code violation for coaching during the final in New York, which she lost in straight sets.

US Open referee Soeren Friemel says the decision is a good one for the tournament, the players and the umpires.

“We have selected the best officials for the 2019 US Open, and there is some flexibility,” he told reporters at the Billie Jean King National Tennis Centre at Flushing Meadows “It’s not the first time that we made decisions that is good for the tournament, is good for the players, and is good for the umpires as well to not be on those matches.

“In the end, our goal is to assign the best chair umpire for the right match so in taking all those factors into consideration, the decision was made that he would not do any of the Williams sisters’ matches.”

In heated exchanges in last year’s final, Williams told Ramos “you will never, ever, ever be on another court of mine as long as you live.” But the US Open says the decision has been taken “collectively,” and not in response to a request from the Williams sisters. It is not unusual for umpires to be kept away from players after a contentious match. The Brazilian Carlos Bernardes did not umpire Rafael Nadal for a significant period after a disagreement about time violations at a tournament in Rio in 2015.

Ramos umpired this year’s Australian Open semi-final between Petra Kvitova and Danielle Collins, but has not yet been given the chance to add to his tally of 10 Grand Slam singles finals. “Carlos has worked all the other Grand Slams,” Friemel added. “He has done Davis Cup, Fed Cup, and he’s going to work the Davis Cup final so he’s considered still for all high-profile matches.”

The US Open is the final Grand Slam of the year, and begins in New York on Monday.