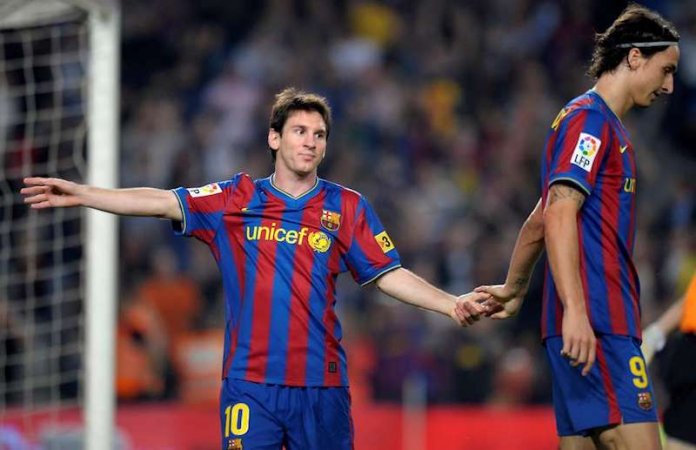 Lionel Messi and Zlatan Ibrahimovic are the star names on the 10-player short-list announced on Monday by Fifa for its Puskas award for goal of the year.

They are joined by three women and five men, with goals scored between July 16, 2018 and July 19, 2019.
There are nominees from the Bundesliga, Spanish Liga and women’s World Cup and one, a jaw-dropping shot by Billie Simpson of Cliftonville Ladies, from a Northern Ireland women’s league game played on what appears to be a public pitch in front of no spectators.

Messi, who has yet to win the award, earned a seventh nomination with a delicate chip for Barcelona against Betis in Seville. Ibrahimovic netted with a balletic volley for LA Galaxy in Toronto in Major League Soccer.

The award, which was established in 2009, is named after the legendary Hungary, Spain and Real Madrid striker Ferenc Puskas.
Fans can vote until September 1 on the 10 candidates nominated by Fifa. The governing body of world football will then choose between the top three vote getters.

The two other women candidates are Ajara Nchout for a dribble and shot for Cameroon against New Zealand in the World Cup and Amy Rodriguez of Utah for a dribble and long-range shot in the US National Women’s Soccer League.

The remaining five choices are:
– Brazilian Matheus Cunha, of RB Leipzig, for a spin and chip against Leverkusen in the Bundesliga
– Italian veteran Fabio Quagliarella for a back-heeled volley for Sampdoria against his former club Napoli
– Colombian Juan Fernando Quintero for a free kick for River Plate against Argentine rivals Racing
– Andros Townsend of Crystal Palace for a volley against Manchester City
– Daniel Zsori for an overhead kick for Debrecen in the Hungarian league.
Last year the Puskas award was won by Mohamed Salah of Liverpool. Ibrahimovic won in 2013. Cristiano Ronaldo and Neymar have also won.
The winner will be announced at the Fifa Football Awards in Milan on September 23.