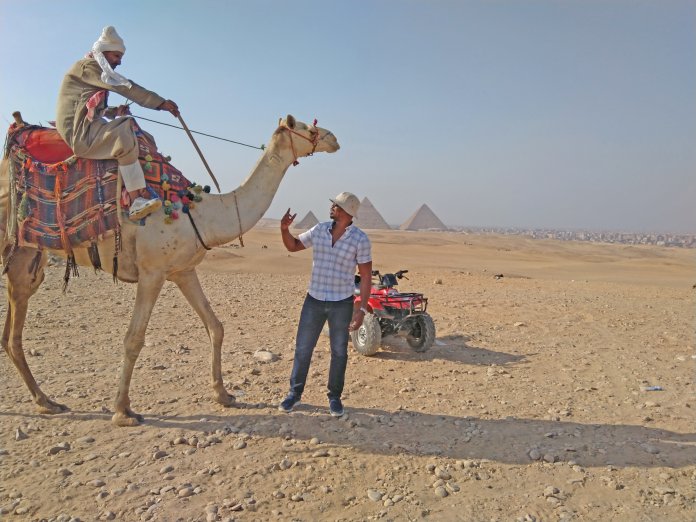 The Pyramids of Giza are among the most recognisable monuments constructed by mankind. Dating back to more than 4,500 years ago, their awesomeness is only truly appreciated up close, Demola Ojo discovers…

A trip to Egypt without visiting Giza to see the pyramids of Khufu, Khafre and Menkaure, as well as the Great Sphinx is incomplete. Giza is less than 30 minutes from Cairo’s city centre (Downtown Cairo) and the opportunity to see one of the Seven Wonders of the Ancient World shouldn’t be missed.

There are so many reasons why seeing the pyramids at close quarters is in many people’s bucket list, with their astounding scale, especially Khufu’s Pyramid – also known as the Great Pyramid of Giza – just one reason.
The pyramids dominate the Giza skyline and can be seen from quite a distance. On some days, they can be seen from the banks of the River Nile at Gezira Island.

Many local tour companies offer tours to the Giza necropolis for a fee, although a traveller can decide to explore solo. While the latter experience offers more freedom and choice and should be cheaper, there’s the danger of being hoodwinked into paying far more than necessary by local guides.

Just like the Egyptian museum in Cairo, Nigerians get a concession when it comes to access fees and get to pay what Egyptians pay, which is like a quarter of the fee charged foreigners.
The pyramid complex is vast and it isn’t advisable to tour on foot. Those with pre-booked tours get to commute with buses. This writer, deciding to explore on his own, got a friendly local guide to take him round on a carriage pulled by a horse. It transports one back in time and is great for pictures.

Puzzling, Perplexing Pyramids
Regardless of how much you’ve researched the pyramids prior to visiting, it doesn’t prepare you for the sheer scale, especially the size of individual blocks of stone. It is an awesome experience, especially when you consider its history.
The Pyramids of Giza have historically been emblems of ancient Egypt in the eyes of the wider world. The Great Pyramid (Khufu’s Pyramid or Cheops Pyramid as the ancient Greeks called it) is by far the oldest of the ancient Wonders of the World and the only one still in existence.
How the Pyramids of Giza were built is one of Egypt’s biggest mysteries. And despite conventional wisdom, who built them is still subject to debate.

These monumental edifices were constructed about 4,500 years ago. The Great Pyramid towers some 481 feet (147 meters) above the plateau. Its estimated 2.3 million stone blocks each weigh an average of 2.5 to 15 tons!
The Great Pyramid was the tallest structure on the surface of the planet for more than 3,800 years; from 2560 BC to 1311 AD, when the Lincoln Cathedral was finished.

Despite having studied the pyramid for centuries, archaeologists, scientists, explorers and adventurers have been unable to fully understand how, why and when the pyramid was built, and most of what we know about it is no more than archaeological guesswork, as experts try to put the pieces of the puzzle back together.

We know that when some of the most ancient pyramids were built, the wheel had still not been invented.
Subsequent pyramids are smaller and less durable. Apparently, the craft was lost, which goes against the grain of progression and improvement associated with human engineering.
Scientists estimate that 5.5 million tons of limestone, 8,000 tons of granite (imported from Aswan), and 500,000 tons of mortar were used in the construction of the Great Pyramid.
Experts estimate that the overall weight of the Great Pyramid of Giza is around six million tons. That means that the Egyptians used countless stones that weigh more than elephants.

Amazing Attributes
The generally accepted claim is that all three pyramids, were built as tombs for the famous pharaohs, Khufu, Khafre and Menkaure. Despite these claims, not a single piece of evidence has been uncovered that would suggest that the mummified remains of a Pharaoh were ever inside the pyramids.

The Great Pyramid is the only pyramid that has been discovered anywhere on the planet with eight sides. Although not immediately visible, the sides of Khufu’s Pyramid are slightly concave.
Additionally, the Great Pyramid was built with mind-bending precision. For some, its precision and alignment is even more significant than its immense size.
The accuracy of the pyramid’s workmanship is such that the four sides of the base have an average error of only 58 millimeters in length. The base of the pyramid is horizontal and flat to within 15 mm. Meanwhile, he sides of the square base are closely aligned to the four cardinal compass points based on true north.

The Great Sphinx of Giza
While it’s easy to be totally engrossed by the pyramids, another fascinating feature of the Giza necropolis is the Great Sphinx, a limestone statue of a reclining sphinx, a mythical creature with the body of a lion and the head of a human.
Though there has been conflicting evidence and viewpoints over the years, the view held by modern Egyptology at large remains that the Great Sphinx was built in approximately 2500 BC for the pharaoh Khafre, the builder of the second pyramid at Giza. The face of the Sphinx is generally believed to represent Khafre, although this is also disputed.
Again like the Great Pyramid, there is not one single contemporary inscription which connects the Sphinx with Khafre, so the evidence is circumstantial.

Cut from the bedrock, the original shape of the Sphinx has been restored with layers of blocks and it is still undergoing some form of restoration as multiple wooden planks attest to. Unfortunately, these presently mar close up pictures of the world’s largest monolith statue.

Exciting Experience
It is important to know that the pyramids and its attendant attractions offer the best ways for locals to get tourists to part with money. For example, getting on a camel for pictures is an experience many want to partake in but it comes at a cost which is sometimes exorbitant and which you may have to pay for before getting off.
My guide also made sure make a stop at a souvenir shop where perfumes and papyrus paintings were sold.
You get a quick tutorial on how the ancient Egyptians made papyri from the plant before being enticed to buy admittedly gorgeous paintings at (you guessed right) a premium.

There is so much to see and do but the searing heat limits the hours many spend exploring the Giza complex.
Some opt to go inside the pyramid chambers, while others (like this writer) decide to go for an adrenaline-inducing drive into the desert with an All Terrain Vehicle to get a more panoramic view of the pyramids.

After an additional hour zooming through the undulating hills of the Giza desert, taking pictures from the summit and getting coated in dust, it was time to head back to Downtown Cairo satisfied in the knowledge that another Wonder of the World had been successfully ticked off the bucket list.