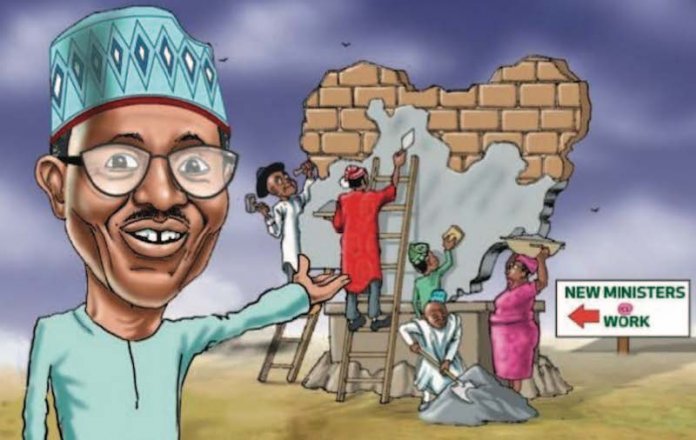 After three months of his inauguration, President Muhammadu Buhari will this week swear in his new expanded cabinet of 43 ministers. The stake is high. This is because the portfolios assigned the 14 returning ministers and the 29 new ones will largely determine whether there will be a remarkable difference in the lives of Nigerians or they will continue to wallow in self-pity; whether there will be gains in public health, education and infrastructure or the country will continue to be measured in terms of lost opportunities.

Will President Buhari make the difference and perhaps banish the pervasive veil of melancholy across the land? Will the president fix the problem of poor performance in office by putting the right people in the right places?

Whatever may have been the misgivings about either the process that threw up the minister-designates or the needless delay in their appointments, what is not in doubt is the enormous task ahead. As we have highlighted in the past, in a democratic dispensation, the cabinet is the engine room of the governing process and with its composition, it is hoped that the Buhari administration will now move quickly into action.

To put the situation rather mildly, Nigeria is today at a critical crossroads. Millions of young Nigerians are increasingly agitated about lack of jobs and poor infrastructure for power supply, roads, healthcare, and pipe-borne water. The increasing decline in allocations from the Federation Account is clearly suggestive of the present state of the economy. An estimated 125 million people live below the poverty line.

Insecurity is all pervasive: from the Boko Haram insurgency which has dislocated more than two million families in the Northeast to kidnapping and general banditry in other parts of the country. Armed robbery and other sundry criminal acts have become daily occurrences in the society that sometimes, Nigerians no longer get shocked by news of these terrible happenings. Our collective psyche has become so numbed that sanctity of life does not mean much any longer. This ought not to be so. For, neither joblessness, nor hunger or anger, could justify the culture of impunity that pervades the nation.

Given the foregoing, it is very clear that Nigerians would not accept ministers of the old stripe: men and women who play to the gallery, saying what they think people want to hear but making lame excuses and doing absolutely nothing. Certainly, Nigerians do not want to be told of huge amounts of money allocated to execute projects simply disappearing or misappropriated. Put simply, they do not want to continue on the same familiar road that has brought the nation to a near social and economic collapse.

Addressing the nation’s many ills and the growing inequalities will depend on how much the incoming ministers act and perform. None of the ministers should therefore be in any doubt about the magnitude of the responsibility that lies before them. Each and every one of them has to perform, and perform creditably. Once inaugurated on Tuesday, each must begin to identify very quickly what needs to be accomplished and set out an implementation plan that is realistic, transparent and measurable.

In agreeing to serve in his administration as members of the Federal Executive Council, the ministers have committed themselves to making a difference in the lives of the ordinary Nigerians. And they must work collectively and lift the country that has been underperforming in almost all areas, and wean it of over-dependence on oil. They must assist the president in his sweeping promise to stamp out corruption and steer the country out of the incessant ills that have diminished our status in the eyes of the international community. They must speak with sincerity about the enormous tasks that face the nation and the best way to overcoming them.

Finally, we believe the president can help in driving performance by ensuring that the right portfolio is assigned to the right person. But the ministers must also know that it is a chance of a lifetime to serve their country with dignity and honour.

Quote
In agreeing to serve in his administration as members of the Federal Executive Council, the ministers have committed themselves to making a difference in the lives of the ordinary Nigerians. And they must work collectively and lift the country that has been underperforming in almost all areas