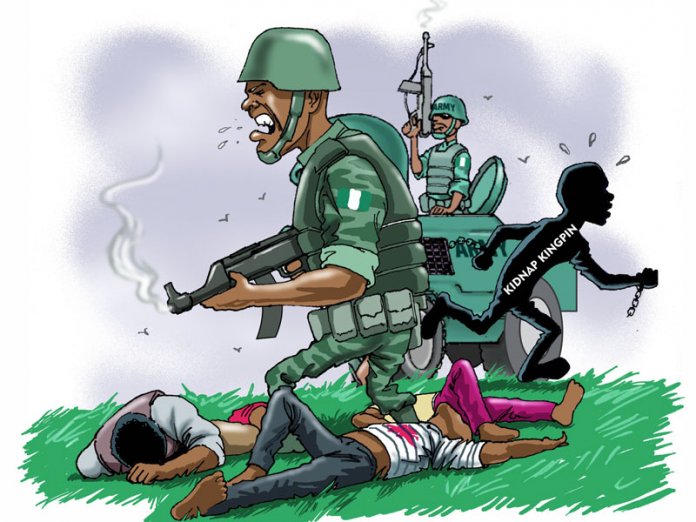 The tragic clash in Taraba State between the army and the police which led to the killing of six persons as well as the escape of a notorious kidnap kingpin has exposed the underbelly of the national security situation in Nigeria. Given what has played out in the public domain over the past week, the conclusion of many Nigerians is that our soldiers are not only trigger happy, some of them have also become part of the criminal enterprise. We call on President Muhammadu Buhari to intervene decisively on the issue.

Last Tuesday, according to the police, special operatives sent from Abuja had arrested a kidnap suspect in Taraba State, handcuffed him and were driving towards Jalingo before they came under heavy bombardments from soldiers. In the process, three police officers and a civilian were killed on the spot while several others were injured. The soldiers, according to police spokesperson Frank Mba, later freed the handcuffed suspect. But in their version of event, army spokesperson Sagir Musa said that soldiers from 93 Battalion got a distress call that kidnappers had come to operate in their community, leading to the hot pursuit that culminated in the unfortunate killings.

However, the police have called out the army in another statement, where they raised some pertinent posers: “Where is the notorious kidnapper, Alhaji Hamisu Bala Wadume ‘rescued’ by the soldiers? How could a kidnap suspect, restrained with handcuffs by the police, escape from the hands of his military rescuers? If Hamisu Wadume is a ‘victim of kidnap’ as claimed, and properly rescued by soldiers, why was he not taken to the army base for documentation purposes and debriefing in line with the standard operating procedure in the Nigerian army? Why were the police operatives shot at close range even after they had identified themselves as police officers on legitimate duty as evident in the video now in circulation?”

While the foregoing are valid questions, that the police are going public is an indication that they may not be getting the requisite support from the authorities. That may also explain why the video clip of the incident, apparently recorded by one of them, is now being circulated on the social media. Aggrieved, the police insist that their officers were murdered by the soldiers who they accuse of colluding with the kidnap suspect now at large. This is a serious allegation that goes to the heart of the mismanagement of internal security in Nigeria.

From the Niger Delta where mindless oil thefts and militancy have for decades been a security challenge to the South-east and South-west where there are increasing spate of crimes – from kidnapping to vandalising of oil pipelines – we have for years been deploying military troops in the streets to perform the role of the police. That has led to cases where soldiers overstep their bounds to engage in activities that highlight conflicts between them and the police. It has also led to several unwholesome practices and lack of professionalism with senior military men being found with hundreds of millions of naira they cannot account for while the junior ones openly solicit for bribes from motorists on the road.

Regrettably, widespread deployment of soldiers for internal security duties has not necessarily reduced the security challenge in our country. Instead, soldiers have become increasingly mired in the vices they were meant to curb. On its part, the police have been weakened and demoralised. The solution is to quickly design a phased programme of reduction of military involvement in internal security duties while increasing the capacity of the police to deal with all forms of criminality. Soldiers should be limited to counter insurgency and other direct combat operations. The end of democracy is best served when the populace is protected by a civil force. The history of our country dictates that we must avoid any further erosion of the professionalism of our military and their needless clashes with other agencies.

Quote
Widespread deployment of soldiers for internal security duties has not necessarily reduced the security challenge in our country. Instead, soldiers have become increasingly mired in the vices they were meant to curb