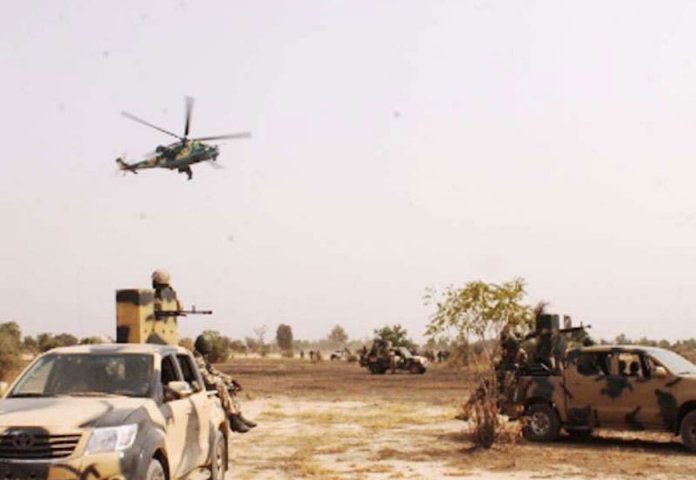 Spokesman of the Nigerian Air Force, Air Commodore Ibikunle Daramola confirmed the air strikes in a statement, saying the air strikes, reports claimed, were conducted following intelligence reports, pointing to the location of the insurgents.

He added that the fighter jets successfully destroyed the Boko Haram command and control center located in Dusula on the fringes of Sambisa Forest.

“In a renewed offensive aimed at further eliminating remnants of Boko Haram and Islamic State of West Africa Province Terrorists (BHT/ISWAP) in the Northeast of Nigeria, the Air Task Force (ATF) of Operation LAFIYA DOLE has launched Operation Green Sweep 3, which targets some identified terrorists positions in Borno State.

“In furtherance of the operation, the ATF yesterday, 9 August 2019, successfully destroyed a Boko Haram Terrorist Command and Control Centre at Dusula on the fringes of the Sambisa Forest.

“The operation was executed after series of Intelligence Surveillance and Reconnaissance (ISR) missions led to the identification of the command centre with its solar panels, communications equipment and other facilities,” he said.

According to Air Commodore Daramola, “The three Alpha Jets dispatched by the ATF engaged the location in multiple passes, recording accurate hits on the target area.

“The structures housing the command centre were completely destroyed by the strikes while several of the terrorists were neutralised. The few surviving terrorists, who were seen attempting to flee the area, were taken out by follow-on attacks.

The NAF, operating in concert with surface forces, will sustain its operations against the terrorists in the North-east”.

However, in a renewed determination to contain terrorism in the country, the NAF said it has continued to ensure that the use of the airspace by its operators especially, in the ongoing fight against insurgency and other forms of criminality in the country, was conducted in accordance with international best practices.

During a ceremony organised to mark the end of a two week training the specialised agency of the United Nations organised for the JTF members, UNDP’s Resident Representative in Nigeria, Mr. Mohamed Yahya disclosed that it has re-built many communities, which the Islamist insurgent group had ravaged in the North-east.

The resident representative charged members of the Civilian Joint Task Force (JTF) involved in the fight to be more focused and diligent to sustain their efforts in helping to root out the insurgents in the North-east.

Yahya expressed regrets over the pockets of attacks currently being witnessed in parts of Nigerian communities, thereby calling on the citizens to support every efforts aimed at finding solution to the problems.

Yahya, who was represented by UNDP’s Team Leader on Governance, Peace and Security, Mr. Mathew Alao, said: “I have always told those who pass through our training to pursue integrity and honesty. Be disciplined and diligent and the reward will follow.

“One thing that Nigerians should appreciate is that the insurgents are not holding any of our territories and that is an achievement that should be recognised.

“Then, all the isolated attacks may always occur because this is a war against an ideological insurgent group which is in the minds and has no territorial limitations and you cannot decode what is in the mind of another.

“That is why we are having all these isolated attacks by the insurgents. We have re-built many communities ravaged by the insurgents. We will continue to train and export the skills to the citizens because we believe that Nigeria will surely overcome the challenge. Together, we can change Nigeria for the better.”

A total of 123 participants drawn from the states in the North-east attended the training programme under a theme, “Exposing the Civilian JTF to Leadership Techniques for Conflict Resolution and Peaceful Coexistence.”