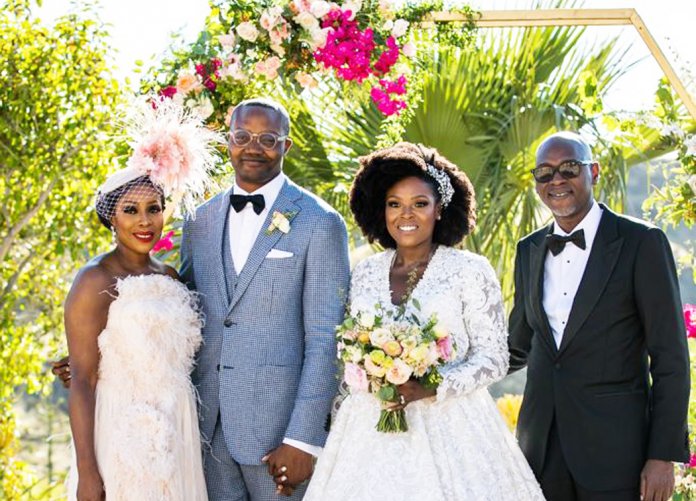 Everyone knows how far or almost near end of the world journey Los Angeles is, but Mo and Tokunoh Abudu, the bride parents and Caasandra Omage the mother of the groom invited their families and friends to their children ‘Califonian style chic’ theme wedding in far away LA. The groom’s father was unavoidably absent. Everyone in attendance flew six hours to London either with British Airways or Virgin Atlantic and where on air for 11 hours and landed at LAX before disembarking to their various hotels.

The theme California style chic sweetly oozed in the atmosphere. Temidayo rocked the look even in her wedding gown, she was  fashionably a bohemian bride in her natural afro hair. No doubt every wedding is actually the brides day.  The couples friends flew in from different parts of the world to celebrate their special day with them.

The Californian chic guests isn’t all about bodacious curves and bleached-blond hair. Instead, the very best examples of the west coast’s sartorial vibes are about fashion-forward looks that play with prints, bold colors, and strong silhouettes. Birkenstock’s new Big Buckle Collection works for the outfits.

Californian Chic Dress is comfortable flowy dress, long or short, but not skin-tight, or perhaps pants with a T-shirt or “ethnic” blouse. Co-ordinated jewelry, but nothing too conspicuous. For men, sandals or boat shoes or loafers, either long or short pants (jeans ok- NO embellishments} and Temidayo and her friends suited the bill.

California is a western U S state ,it stretches from the Mexican border along the Pacific for nearly 900miles, its terrain includes cliff-lined beaches, redwood forest , the Sierra Nevada mountains, Central Valley farmland and the Mojave desert .California is a also a state in the Pacific region of the United States with 39.6 million residents it is also the most populous Us state and third largest by area and it is the seat of Hollywood entertainment .

Adebola and Temidayo Makanjuola pre -wedding dinner was held in the palatial mansion of Rasaq and Kate Isa at the Wiscasset Drive, West Hills. The guests were all welcomed to the party by the host with a warm embrace, choice exotic drinks, Nigerian and continental food from Thai. The Isa’s mansion is right on the hill top surrounded by luscious lawns of greenery grass.

It was a lovely evening and the atmosphere had dignitaries like Atedo and Dudu Peterside, Sienne All-Well Brown, Ruth Benamasia-Opia, Tayo Ayeni and his wife, Marian Omatsone, Ruth Osime of Thisday Style, Pat Faniran, Eku Abudu amongst others.

The next day was a Saturday, as the brides mother and her best friend, business woman Marian Omatsone, who were both staying at the Waldorf Astoria, had an all day ladies hang out and shopping spree with her friends. They had drinks and canapes at the Waldorf suite in Waldorf Astoria before hitting the Rodeo Drive. This was after  everyone had recovered from the pre -wedding dinner shindig. These fun loving and free spirited women hit the city and off to Rodeo Drive in a limousine ride, as Ifeoma Williams who was with the all female group acted Julia Roberts epic role in the movie ‘Pretty Woman’ when she went shopping on Rodeo Drive.

The venue was like a massive palace, it was a hot scotchy sunny day, yes the sun was not smiling as it pierces through the skin, probably reminding everyone that it is summer in California.  The venue of the wedding is Hummingbird Nest, it  is an event venue unlike any other and it simply takes your breath away located in the Santa Susana Mountains less than a half hours from Los Angeles in the United State of America this extraordinary property is decorated with regal Spanish architecture and decor, a gorgeous array of outdoor spaces perfect for ceremonies, receptions, and private events that can accommodate up to 1000 guest living them with unsurpassed warmth and luxury .

The magical and teary moment of the day was the walk down the aisle by Temidayo escorted by her father, Tokunbo Abudu, who looked at his daughter with so much love as he handed her over to Adebola

There was an open air exchange of wedding vows and church service for the couple, while guests seated as witnesses, watched and participated too.

After the service there was a cocktail bar for guests, light finger foods were served, the guests networked, mingled and had photo up with the couple especially. The groom’s mother Cassandra Omage came with large drove of her friends who were all decked in an exotic  lilac coloured lace aso ebi.

After an hour, all the guests were asked to move to the open field where the 3 course meal dinner was held.

The magical atmosphere was tastefully built with chandelier and Christmas like lights. The ambience  had this cherubic feel, maybe because of how the lights sparkled everywhere in the middle of the massive field where the reception for the wedding was held.

After their wedding train arrived, the couple were chauffeur driven  in a golf buggy to the reception and that wowed the crowd, maybe with their playful and free spirited lifestyle came to play a lot with their marital plans.

Temidayo Abudu is a copy writer and film producer who is passionate about PR and Media & Communications. She’s a graduate of Royal Holloway where she obtained a 2.1 in Management and Marketing.

Temi as she is fondly called, is also passionate about Healthy living, weight loss and healthy lifestyle, thus, the birth of her company called Healthy Options by Ted.

In her capacity as a producer with EbonyLife TV, the 29-year-old has produced great Nollywood movies, including “The Royal Hibiscus Hotel “ and “The Wedding Part 2”.

She is definitely promising going forward as a creative.

Temidayo looked so beautiful in her gorgeous wedding dress that was designed by Ysamakino, based in New York with design roots in Tokyo. She was accessorized with a Christie Lauren’s headpiece and custom veil. While the bride, Temidayo’s stunning facial look was achieved by multiple award winning African based International makeup artist, Bimpe Onakoya.

The mother of the bride

She is now the iyalode of Nollywood as she repeatedly churns out mind blowing movies every now and then. She is an aggressive business woman, she is unapologetic about her personality, she loves fashion and plays a prominent role in the Nigeria fashion scene with her taste for labels. You cannot help but notice her in any crowd or function. She keeps making eyes trail her steps with her styles, in short she is the cynosure of all eyes anywhere she goes and keeps peoples mouth wagging all the time and can’t be bothered about their opinion, take it or leave it, she is a show stopper anytime any day.

Known as Mo Abudu, Mosunmola Abudu, is a media mogul, filmmaker and founder of Africa’s first Global Black Entertainment & Lifestyle network, EbonyLife TV. Since it took off in 2006, EbonyLife TV airs in more than 40 countries across Africa, as well as in the UK and the Caribbean.

The mother of two was described by Forbes as “Africa’s Most Successful Woman”, a title well deserved.

Making her debut film in Nollywood and the world at large, the 54-year-old Mo made one of the most successful films in the history of Nollywood, “Fifty “ where she came in as the executive producer. Today, EbonyLife Films have loads of great movies tied to their names.

In 2013, Abudu was listed by Hollywood Reporter as one of the 25 Most Powerful Women in Global TV.

Again, in 2013 , Forbes Africa recognised Abudu as the first African woman to own a Pan-Africa TV channel .

On her recently announced historical project, Abudu is working on a series about the Amazons who took on French colonialists in a 19th century west African kingdom which Sony Pictures TV revealed that had concluded on a three-year deal with EbonyLife on that.

As a philanthropist, Abudu has been impacting lives both on and off the screens.

Mo Abudu rocked this Oscar de la renta odlrspring2019 show strapless gown crafted from fluid silk-chiffon and finished with wispy feather embroidery. It’s worth $8,690 ( #3,154,470.00). Her face beat was by one of the best in Africa and one of the pioneers in Nigeria beauty industry   and founder of BMPro, Banke Meshida Lawal.

Mo Abudu’s guests and the After Party

The event was intimate and Mo Abudu’s guest list included a number of power couples, Atedo and Dudun Peterside, Asue and Ifeyinwa Ighodalo, Oye and Bola Odukale, Bosun and Yinka Oredola, Tayo and Tutu Ayeni, Rasaq and Kate Isa who hosted the newly weds to a pre wedding party the night before in their home in Beverly Hills. Mo Abudu was of course supported by many of her other friends to include Ruth Osime, Pat Faniran, Marian Omatsone, Eryca Freemantle, Maureen Edu, Ekua Abudu, Omoni Oboli, Ifeoma Williams, Banke Balogun, amongst others. The Grooms mother was supported by many of her friends who all wore a lovely purple aso ebi. Temidayo and Debola also had a lot of support from their friends. The after party was a true carnival set up with a merry go round, Ferris Wheel, photo booth and more. Temidayo Adeola came out casually dressed in a short spaghetti silver dress and trainers in her second outfit to the surprise of the crowd who were all expecting to see the couple in a fanciful outfits especially Temidayo in a long evening ball gown dress. You can refer to them as the ‘Unusual couple’ they did everything at their wedding differently.

The chilly sweet evening ended a carnival night as all the adults felt youthful again as they swinged on the merry go round, screaming and laughing at each other. There was also good music as people were dancing everywhere and some people played games.

You must give it to Mo Abudu, she is the perfect host, she makes you leave her parties even premieres longing for more and that was how we ended the Califonian chic style wedding of her daughter in the most powerful entertainment city in the world..yes we were entertained with a blissful memory of the wedding.