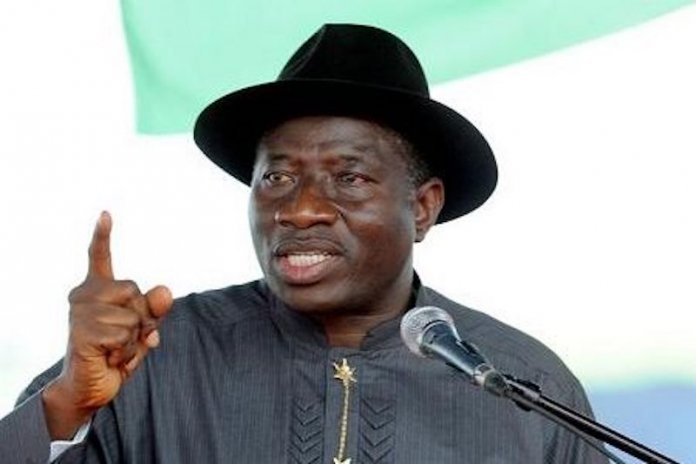 Former President Goodluck Jonathan has declared that the Bayelsa State chapter of the All Progressives Congress (APC) lacked the political presence at the ward, local government and state levels to win the November 16, 2019 governorship election.

This is coming as the state Governor, Seriake Dickson, has disclosed that the state spends about N6 billion annually to service 1,500 political office holders.

Jonathan, who spoke during the PDP Elders Advisory Council meeting at Government House, Yenagoa, explained that the large number of PDP aspirants showed the dominance of the party as a preferred platform for the election.

A statement by the Special Adviser to the Governor on Media Relations, Mr. Fidelis Soriwei, quoted the former President as saying that the PDP had all the requirements to record a landslide victory at the forthcoming poll.

Jonathan commended Governor Seriake Dickson, the state Chairman of the PDP, Mr. Moses Cleopas and all critical stakeholders, including the 21 aspirants for working for the continued stability of the party.

He said that it was important for the PDP to get its acts together so that it would not create room for opportunistic platforms to steal the party’s victory.

He said: “I need to plead with all the aspirants and all political leaders that there should be no mudslinging. We must free the space and eschew rancour because finally one person will become the candidate of the party and for that one person to win the election, all aspirants must work for that person.

“It is only our unity that can give us victory and if we are not united, they (APC) can get away with it.

“For example, it took the unity of the people of Rivers State, including women who were resolute against soldiers to get the PDP victory in the state. If that had not happened, they (opposition) would have taken it.

“At the end of the day one person will emerge and all of us will work for whoever emerges as candidate of the party”.

Dickson stressed the need for members of the party to forge a united front to maintain its dominance and control of power in the state starting with the local council elections billed for August 10.

He called on all members of the party, particularly the governorship aspirants to work hard for the victory of the chairmanship and councillorship candidates of the PDP in the Saturday’s election.

According to Dickson, the large number of governorship aspirants only showed the democratic nature and style of leadership of the PDP.

He called on the national leadership to complement the effort of the state in providing a level playing ground for all the aspirants.

The Governor explained that if he had taken a decision to stop aspirants from picking the form, the reactions would have affect the peace and stability of the party.

He said: “When people say that 21 aspirants are too many, I disagree. In 2006 we had close to 11 aspirants and for a party that is strong, has strength and attraction and connection, that is the dominant political platform, it is expected.

“It’s not completely out of order as a ruling party, with all that we have done and with the way we have decapitated, decimated the other party because they virtually don’t exist in this state.

“So, it is normal for any serious-minded person who wants to serve our people to think of doing so on our dominant platform which we have led and all of us has built and made stronger even in the face of very serious opposition. So, my leaders, for me, there is nothing to lose sleep over.”

The News Agency of Nigeria (NAN) quoted the governor as saying this on a radio programme.

According to Dickson, the huge “political capital” investment is responsible for the high number of PDP governorship aspirants in the state.

The governor, who has been governing Bayelsa on the mantle of the PDP since 2012, explained that the opposition party had invested the money to sustain its loyalists appointed to serve in his administration.

He said 21 aspirants had collected and returned the party’s expression of interest and nomination forms at N21 million each.

The party’s primary election is scheduled to hold on September 2, ahead of the November 16 governorship election in the state.

“The party leadership decided to make the contest open and all-embracing and as a consensus builder, I believe that every aspiration is legitimate, it is a right that they have to test their popularity at the primaries,” Dickson said.

“The large number of aspirants is an indication that the party is a platform of choice for any politician to actualize his governorship ambition and looking at the rival party, they don’t have up to two aspirants.

“Nothing is happening there, the PDP is taking the shine and it is all happening because of the political capital we invested in building the party, if I lost my re-election in 2015, the party would have been dead by now in Bayelsa.”

Presenting the appropriation bill in December 2018 to the state house of assembly, the governor had said that about N23 billion was earmarked for education while N6 billion was proposed for the health sector.