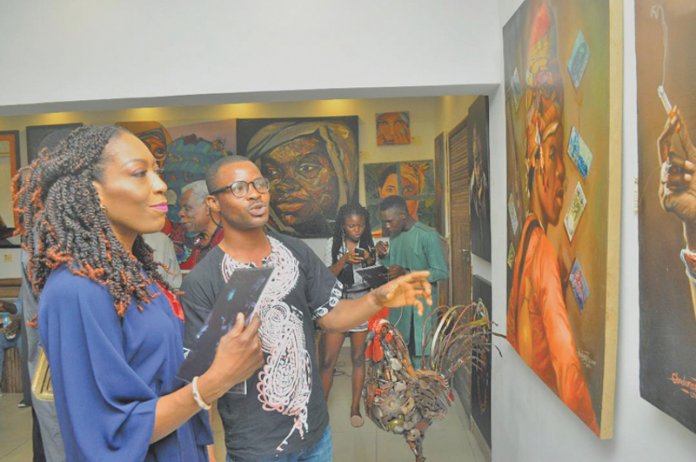 A visual babel of expressions… This best captures the viewer’s first impression of this exhibition. But then, the many works jostling for his attention proved that Lagos really warmed up to Life in My City Art Festival. For beneath the displays on the Thought Pyramid Art Centre’s cluttered walls lurked the testimonial that the city’s younger generation of artists’ energy and enthusiasm seemed unaffected by the N1,000 participation fee, introduced since 2010.

Even the fact alone that the megacity recorded the highest entries, easily overtaking Enugu – the LIMCAF’s traditional catchment area – corroborated a growing acceptance for the festival among its young artists. So, it wasn’t just about the impressive turn-out to the Saturday, July 27 opening of the zonal exhibition at the south-west Ikoyi, Lagos-based gallery.

On its 13th outing this year – and revolving around the theme “The Other Side” – LIMCAF has gained traction among the art communities nationwide and the attention of corporate sponsors. More recently, the telecommunications giant MTN is throwing its weight behind the annual festival, whose focus on the youth seems to chime well with its policies.

Beyond the officialese, which inevitably goes hand in hand with the opening ceremony, it was evident that this Nigeria’s longest-running art fiesta has wormed itself into the industry’s consciousness. Of course, the presence of The Vanguard newspapers publisher, Sam Amuka-Pemu (the chairman of the occasion) as well as that of Omooba Yemisi Shyllon (the founder, OYASAF), Dennis Okoro (director, MTN Foundation), Nonny Ugbomah (executive secretary, MTN Foundation) and Charles Courdent (director, Alliance Française), among others, italicised the importance of the event.

For the annual fiesta, it has so far been an inspiring progression into relevance from modest beginnings. Recall that it had started as the modest effort of an Enugu-based advertising mogul, Robert Orji in 2007 with the support of the French Embassy and the Alliance Française network before eventually blossoming into the unique pan-Nigerian festival that it is today.

Back to the exhibition itself, a few flashes of brilliance here and there proclaimed it as a veritable harvest of talents. Out of the more than 100 works featured in the exhibition, which ended on Friday, August 2, only 20 would be chosen, explained the head of the zonal exhibition’s panel of judges, Ato Arinze. These chosen ones would then progress to the grand finale exhibition, which holds in Enugu in October.

There, they would be joined by works culled from other zonal exhibitions to vie for the overall prize of N500,000 as well as the various category and consolation prizes. The top four winners of the 2017 edition were sent on an all-expenses-paid trip the Dakar Art Biennale, which is popularly known as Dak’Art, by the revered artist El Anatsui. The top six winners this year will join the top six winners of 2018 for a similar trip to the Senegalese capital for the biennial event.
With the growing recognition of LIMCAF, by the likes of El Anatsui and even the late Okwui Enwezor, among other artistic greats, its future gleams with promise.