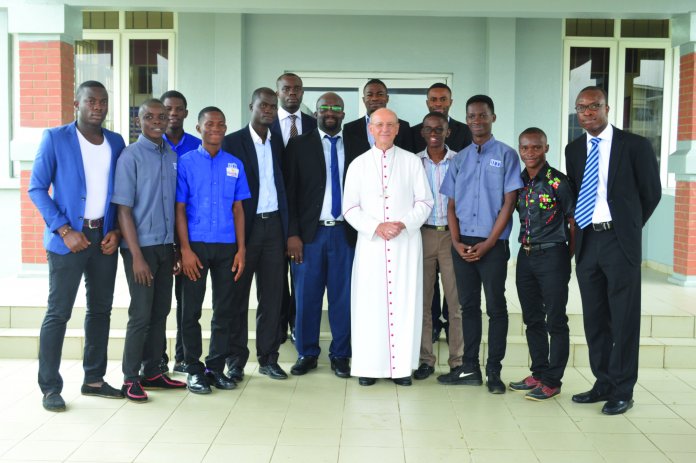 On the 19th of July 2018, exactly a year ago, the Prelate of Opus Dei -Monsignor Fernando Ocariz- fondly called the Father, visited Nigeria for the very first time. The Prelate was scheduled to spend six days in Nigeria during which he would get to interact with faithful of Opus Dei in two different cities, Lagos and Enugu. There was a lot of excitement that preceded the Prelate’s visit and as such, it was no surprise to see lots of people at the various get-togethers with the Father.

The motive behind the Prelate’s visit was to encourage the faithful of the Work, co-operators and those that participate in the formative activities given by the Prelature, in their continuous struggle to be holy, more apostolic and professionally competent. The Prelate encouraged young Nigerians not to be content with just being called or known as good people, but to seek a closer identification with Christ our Lord so as to become apostles.

I personally was eager to see the Prelate as I had not been able to meet with his predecessor, Alvaro del Portillo. As a young boy, I have benefited immensely from attending means of formation from both Helmbridge, SouthCreek and Whitesands School where I graduated. These centres have enabled me to better understand what vocation is all about and that each of us have a primary vocation which is to spread the word of God. Over the years I have been able to attend retreats, recollections, meditations, benedictions and also get spiritual directions from priest of the Work.

The Father had various get-togethers with men, women; in attendance were young people, elderly people, the sick, the healthy, , all of whom were elated to see him in person since his appointment as Prelate. The first get-together was with the women. Waiting in the auditorium of the Lagoon school, to be with the Father, were undergraduates of Universities, schoolgirls and friends who were all visibly delighted to meet and speak with him, was, for me, delightful. They gave the Father a hearty reception, asked questions and also requested for new centres to be built in other states in Nigeria. The Prelate’s message to them was simple and straight to the point. He made them understand that they were not just following a beautiful doctrine or a theory but the person of Jesus Christ who is very close to them in the Holy Eucharist. Later that day at the Lagos Business School (LBS), the Father had a get-together with the men. I was privileged to attend the get-together which had an impressive turnout of young men like myself. We were numbered over three hundred and some of us had come from as far as Ibadan, Enugu and Benin. In attendance was even a Muslim, who got the chance to ask a question on studying. Cladded in various beautiful traditional attires, we eagerly awaited the arrival of the Prelate and wanted to hear what he had to say to us. He encouraged us to be dedicated to the various means of Christian formation which would help us come closer to God.

“Christ is the focus and the person you receive through the meditations, talks and others means of formation,” he said. The Prelate also spoke to us about striving to live a virtuous life amid a rapid decline in the level of morals and sexuality. “Don’t be surprised when you’re tempted; and when you fall, the solution is to rise and begin,” he told us. On the question of vocational discernment, he urged us not to be afraid, but to take courage if a person sensed that God was asking him for more, realizing that God does a great favour to the person who corresponds to His call.

Before concluding the session, Monsignor Ocariz ended by asking all present to pray for Pope Francis and also pray fervently for the growth of Opus Dei in Nigeria. He also encouraged co-operators of Opus Dei to work with the faithful of the Prelature to support Opus Dei as their personal circumstance.

As scheduled, the Prelate visited the main campus of the Pan-Atlantic University, Lekki, Lagos where he blessed the new grotto of Our Lady of Perpetual Help. He encouraged all those present at the brief ceremony to have a great devotion to the Blessed Virgin Mary, to whom they should endeavour to present all their needs. Following a brief tour of some university facilities, the Prelate had a get-together with members of the Pan-Atlantic University Foundation, the Governing Council and other heads of units of the University.The Prelate spoke on how best to educate people in freedom, a lesson that should take place in and out of class. He also touched on the importance of taking decisions collegially when necessary, always inspired by love for the person corrected. In one of his get-togethers with members of the Work, the Father was asked how domestic work should be viewed and he explained that Opus Dei teaches sanctification in ordinary life within and outside the home. “It makes a lasting impression on people”, he said, adding that “domestic work is the backbone of the family atmosphere in Opus Dei.”

When asked about emigrating from Nigeria due to the present persisting economic challenges scourging the country, the Prelate pointed out that every country faced its own difficulties. He said that although emigrating may not necessarily be the best option, it sometimes is. But he went on to advice the audience to improve themselves professionally and to work together for the common good.

Before his departure, the Prelate was able to make a visit to the Institute for Industrial Technology (IIT), a social welfare project set up to provide technical skills for secondary school leavers across the country. After embarking on a tour of the Institute, the Prelate thanked the various patrons, staff and management of the Institute for their work. He also encouraged the staff to foster among the students a concern for the common good, which would help them to make an impact in their respective communities. He also commended the school for including virtues, ethics and marriage in the curriculum.

The Prelate stated that “apart from acquiring technical values the students also need to acquire the necessary human values as well.” He also promised to pray that the Institute gets more donations, scholarship for deserving students and support which will aid the Institute’s development. The Prelate also paid a short visit to the Archbishop of Lagos, His Eminence, Archbishop Adewale Martins. He was welcomed cordially by the Archbishop who expressed his joy at meeting him. The meeting lasted for about thirty minutes.

When the Prelate departed his residence for the airport, he thought he had taken leave of his children, but the latter had one last surprise for him. Upon his arrival at the Murtala Mohammed Airport Lagos, he was surprised to find more than four different families waiting to bid him farewell. He reminded his children that in Opus Dei, “we do not say goodbye” because family members only know how to say “see you later”. He was going to see us his children soon, much sooner than we had to wait for this.