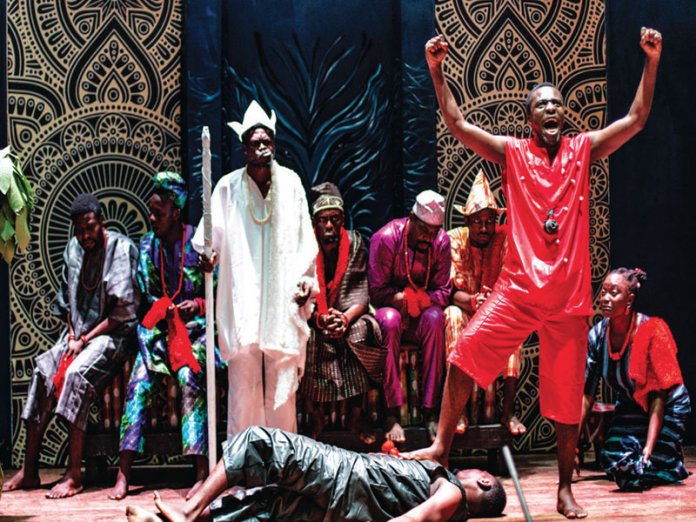 Abdul-Qudus Ibrahim’s Jagagba carefully builds the tempo for the revelation of a feminist theme through its compelling characterisations, says Yinka Olatunbosun

Power play, conspiracies and murky politics are some of the signposts of the human society mirrored in the second Beeta Playwriting Competition winning play, Jagagba written by Abdul-Qudus Ibrahim, a graduate of Banking and Finance from Covenant University. To fulfill the Beeta tradition, the play was performed recently at the Agip Hall, MUSON Centre, Onikan, Lagos for an unsuspecting audience, completely oblivious of the nicely wrapped feminist slant.

The thermal control system was just perfect inside the auditorium as the production kicked-off some few minutes after the scheduled hour. A searing voice of the female narrator (Mawuyon Ogun) gave a background to the play in its dramatised prologue that introduced the audience to the king of Ile-Rere, King Adewale (Kunle Coker). The King who, though has ruled for several years after his late father, is yet to produce a male heir. He has no fewer than 15 wives and many concubines and 30 daughters. At the news of another baby girl, he orders that his wives and daughters be killed.

He adopts an orphan, Adebola and grooms him for the throne before his death. The Kingdom is thrown into pandemonium as various royal families battle for the throne upon the King’s demise, arguing that Adebola is not of a royal blood. The Jagagba crown must be rightly earned otherwise, the covetous individual runs mad upon wearing it. Adesupo (Kelvinmary Ndukwe), the banished King’s brother surfaces from the exile, fights Adebola in Ija Jagagba to become the King. He forcefully inherits Adebola’s vengeful wife, rapes her in sheer subjugation which turns out to be a costly mistake.

Though made a Queen, Olori Abebi gives Adesupo’s secret of power to Balogun (Olarotimi Fakunle), another contender for the throne. After Adesupo’s death, Olori Abebi proposes to have a place in the ruling council. Balogun ridicules her, telling her she will only get a spot as one of his children’s wives- as consolation prize for leaking a secret that empowers him to gain the throne.

Abebi is vicious. She schemes her way into power by blackmailing Baba Ifa (Omololu Sodiya). The play ends as she is crowned the Queen. Jagagba is highly satirical as it takes a piercing look at the inclusion of women in governance, their innate ability to influence and patriarchy in politics.

In performance, Jagagba was directed by Bunmi Adewale, a firebrand female director who neatly arranged the orchestra’s intrusion to fit the logic of the play not just as mere interludes.The production struck some high notes in its costume, use of props and set design. Also, the lead character, Abebi enunciated her lines with a quasi-Aristotelian benchmark.

But some may find it disturbing that in the play, a villain gets victory or that Abebi’s big persona overshadows that of Baba Agba, a traditional umpire whose role is muted by the intrigues of politicking. That is the reality of today’s politics or the unwholesome fight for power- it cripples institutions.

The producer of the play, Bikiya Graham Douglas gave a rousing closing remark about the play after the curtain call.

“We founded the Beeta playwright competition to find new voices through plays in Nigerian literature and this play won out of 348 entries,’’ she declared as the audience cheered.