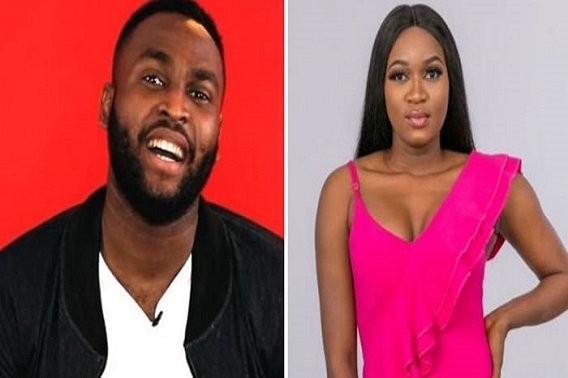 Tonight live eviction show saw Nelson and Thelma leaving the Big Brother Naija House. They  are the sixth and seventh housemate to leave the reality show.
Nelson was the first to be evicted.  During his four-week stay in the house, the model and beauty pageant winner snapped up the Head of House title and was also the masseuse in the house. He wasn’t immune to the love triangles that have become a prominent feature in this season. Though his first love interest was Diane, he however felt his fellow evicted housemate Tuoyo has more hots for her. Thus, in the spirit of brotherhood, decided to set his eyes on another available spicy housemate in the house. But he didn’t really have to work hard because Esther had her eyes on him. At the live show, he revealed that Esther was a strong woman who wasn’t willing to let go of him. This characteristic he said was a huge turn on for him. With him out of the house, will Frodd who has been rejected by Esther stand a chance?
Initially, Thelma was mocked for her unique way of interspersing Igbo and English language. At a point, she was one of those whose accents on the reality show was ridiculed on social media. Thelma was also the first to have a row in the house with Tacha. She also had a heated argument with Esther over the right term to describe people suffering from autism. However, the young lady from Imo state was a favourite in the house, mostly for her Zanku dance moves and open-mindedness. She gave a bit of that on the live show when asked who she thought would emerge this season’s winner. She boldly told the host Ebuka Obi-Uchendu that she can’t say because the winner will not share the prize with her.
Nelson on the other hand believes that Mike or Omashola may get the coveted prize.
With the double evictions tonight, only 14 housemates are competing for the grand prize of N60 million. Live nominations take place every Monday night but Ebuka disclosed to viewers that Biggie will be bringing a new twist on Tuesday. What could it possibly be?