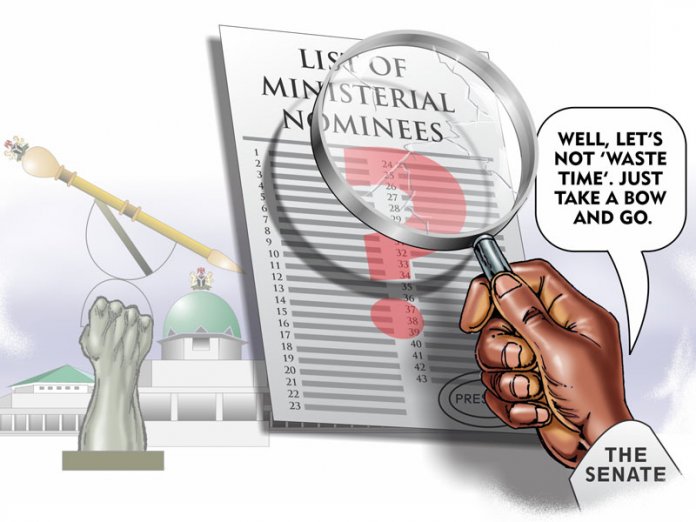 The confirmation process leaves much to be desired

The nomination by the president of persons found fit to be members of the Executive Council of the Federation and their confirmation by the Senate are duties imposed by section 147 of the 1999 Constitution. It, however, goes without saying that such duties should be conducted in an open, transparent and solemn manner; as these ladies and gentlemen will be members of the highest policy and decision making council of the government. It is with this in mind that President Muhammadu Buhari on Monday sent a list of 43 ministerial nominees to the senate. While diverse sources have questioned the suitability and credibility of a good number of these nominees, the public expectation was that the Senate confirmation hearing process would be sufficiently rigorous to weed off the most unsuitable ones among them. Sadly, like the confirmation of the Chief Justice of Nigeria, it has been another disgraceful outing for the Senate.

The confirmation process is very vital to the proper functioning of the presidential system of government. It is particularly important in our country where institutions are relatively weak and the efficacy of the civil service to underpin the performance of ministers uncertain. Regrettably, most Nigerians are likely to pass what is going on at the senate as more of an absurd theatre than an exercise in reinforcing the meritocratic quality of governance. It has been pointed out, for instance and with back up evidence, that a good number of the nominees still have live corruption related cases with the Economic and Financial Crimes Commission (EFCC). Some of the former governors among the nominees have left serious indictable performance deficits and woeful accountability records. In this context, the burden of the Senate was both moral and empirically meritocratic.

Instead, the Senate deliberately and casually abdicated its responsibilities to Nigerians by either asking most nominees to ‘bow and go’ or pass with light routine and superficial interrogation. This abysmal mode and standard of confirmation is ultimately an indictment of the upper house. Worse still, it reinforces the widespread feeling that the leadership of the new Senate is merely a recruited plant of the executive in a hardly disguised overrun of the legislature. But the danger of this lazy confirmation process is a deliberate watering down of the standards of credibility, competence and qualification of those who man strategic departments of the state for the delivery of services and programmes to the public.

The practice of exempting past members of the National Assembly from public scrutiny is an irresponsible tradition. Discharging the constitutional burden of confirming ministerial nominees is not the place for the display of petty espirit de corps! By asking nominees to simply “take a bow”, the confirmation process has become another deal-making. That explains why some nominees openly begged that they be exempted from saying anything and they were obliged.

The lack of rigour by the Senate in this process has raised questions that are likely to burden some of the new ministers and probably hamper their work. Those of them with ongoing corruption cases will have to navigate the treacherous divide between their potential criminal indictment and the integrity requirements of their new positions. On the part of the president, he will be hard pressed to convince the public that he is still committed to an anti-corruption project with this mix of ministers. Even worse, the security agencies that cleared some of these nominees for the president may have an enduring difficulty in proving their political neutrality and professional integrity.

Nonetheless, in terms of speed of the confirmation process, the ninth Senate is about to set a new record. In a matter of days, it will have completed the hearings and confirmation of all of the 43 ministerial nominees. This record would ordinarily be impressive against a background of previous tardiness and delays characterised by undue politicisation of the confirmation process. The expectation now is that the new ministers would be quickly sworn in to re-ignite the governance process which has been in suspended animation since after the 2019 general elections.

Quote
The danger of this lazy confirmation process is a deliberate watering down of the standards of credibility, competence and qualification of those who man strategic departments of the state for the delivery of services and programmes to the public 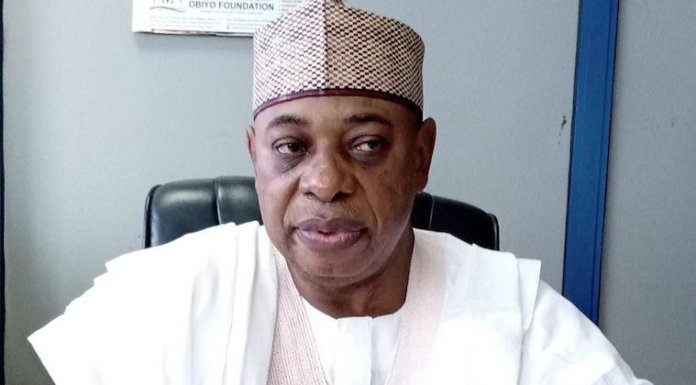