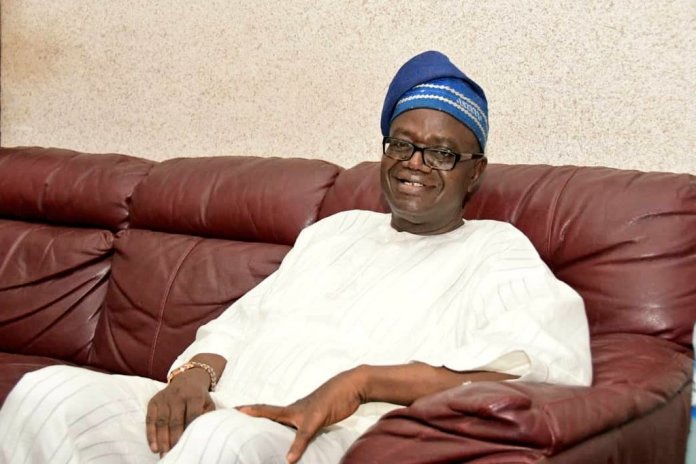 Though, the 2020 Gubernatorial Election in Ondo State is a bit far, the appointment of Senator Tayo Alasoadura as minister designate, seems to be changing permutations for the election writes James Sowole

Until Tuesday July 23, 2019, when President Muhammadu Buhari sent the much awaited list containing 43 names of ministerial nominees to the Senate for screening, the general belief in Ondo State was that the realisation of the second term ambition of Governor Oluwarotimi Akeredolu depended largely on who becomes the minister representing the Sunshine State.

The news therefore, of the nomination of Alasoadura that represented the Ondo Central in the 8th Assembly, no doubt jolted the camp of those opposed to the Akeredolu’s second term ambition.

Though, Alasoadura contested the APC governorship primary against Akeredolu in 2016, the two closed ranks immediately after announcement of the result and subsequently for the real election. The bond was strengthened further after the election as Alasoadura was one of the most consistent attendees of events organised by Akeredolu administration of all other former governorship aspirants.

Many people therefore said the closeness of the two men was among the reasons responsible for the loss of Alasoadura in the 2019 General Election, through which he sought re-election to the upper chamber of the National Assembly. For equity and fairness, the fact that Akeredolu is from Owo in Ondo North, may have been the factor which made people not to consider any person from the area as capable of emerging as a minister representing Ondo State. In actual fact, there was not even a rumour that the name of any person in the Northern Senatorial District was submitted to the presidency for consideration.

On the other hand, there were anxieties among politicians in the two other senatorial districts of Ondo South and Ondo Central on who will emerge as the state’s representative. In the current dispensation, it was gathered that when Akeredolu was given the opportunity to nominate somebody from the state, he wasted no time before names of three persons from the Ondo Central were forwarded to the presidency.

However, indication that Akure would produce the minister that will represent the Sumshine State in the yet to be constituted cabinet of President Buhari emerged at the reception organised for Alasoadura in Akure on his return from Abuja and which attracted notable politicians and his supporters.

At the event, the governor said Akure, should be given the opportunity to produce the minister. Until now, no Indigene of Akure, the state capital had been appointed a minister since the return of Nigeria to democracy in 1999.

The governor blamed the people of the senatorial district for the defeat of Alasoadura in the last general election despite his performance at the 8th National Assembly. He said Alasoadura, who was the Chairman, House Committee on Petroleum (upstream), performed very well to deserve being reelected.

Also, in view of the disagreement between Akeredolu and some national leaders of the All Progressives Congress (APC), and some interest in the presidency, which many believed should be capitalised on to make him to lose the second term, it was expected that somebody from the Ondo South Senatorial District would clinch the state’s slot as a minister in the new cabinet.

Kekemeke, a former member of the Ondo State House of Assembly, commissioner and Secretary to the State Government (SSG), is a native of Ese-Odo Local Government Area. The legal practitioner failed to secure the state’s ministerial slot in 2015 as he was said to have narrowly lost to Prof. Claudius Daramola, the immediate past Minister of State for Niger Delta.

Though, ministerial slot is the position being schemed for in the immediate, the race to 2020 Governorship Election is the ultimate target particularly for the schemers of Southern Senatorial District origin. The three people from the district, were no doubt in opposition to the Akeredolu’s political camp.

There were speculations that Oyedele was the favorite of an Abuja Mafia for the state ministerial slot. Regarded to be a close political associate of Buhari, Oyedele was said to be the person who designed the logo of the defunct Congress for Progressive Change (CPC).

The NDPHC boss, who hails from Okitipupa Local Government Area, was also said to have played an important role in the formation of the APC in 2013. It was learnt that a group of Abuja politicians sought the ministerial job for him so that he would be well-placed to displace Akeredolu in the 2020 election.

Oke, who is from Ilaje Local Government Area, also wanted the ministerial job to enhance his chances of winning the next state governorship election. The two-time governorship candidate and South West Coordinator of President Buhari Campaign Organisation in the last election, was speculated to have secured the nod of Tinubu for the ministerial ticket.

The believe that anyone of the three people that jostled for the ministerial position from the Ondo South will displace Akeredolu in 2020, was predicated on certain political antecedents in the state concerning gubernatorial election and the fate of incumbent governors.

In 2003, the Late Dr Olusegun Agagu, who was the Minister of Power and Steel under former President Olusegun Obasanjo, displaced the Late Chief Adebayo Adefarati while the latter contested for second term. Prior to the 2003, Agagu of the PDP and a former deputy governor to Evangelist Bamidele Olumilua between 1992 and 1993, lost the 1999 gubernatorial election to Adefarati who was the candidate of the Alliance for Democracy (AD).

In the same vein,  Dr Olusegun Mimiko, who served as Secretary to State Government (SSG), under Agagu before he was appointed Minister of Housing and Urban Development under former President Olusegun Obasanjo, also defeated his former principal (Agagu) in the 2007 Election.

It was generally believed that both Agagu and Mimiko were able to defeat the incumbent governors because of the political influence and resources that they were able to  deploy.

Learning from the past experiences, it was not surprising to many therefore, that Akeredolu must have pressed the required buttons to ensure that his candidate got the ministerial job to make his way to his second term smooth.

To ordinary people, Akeredolu seems to be crossing some hurdles on his way to secure second term when one considers the emergence of Alasoadura with the latest peace efforts by APC stalwarts led by Tinubu, but real politicians believed that there are still lots of ground to be covered. For instance, many of the aggrieved leaders and members of the party did not believe that the latest peace efforts championed by Tinubu had addressed their complaints.