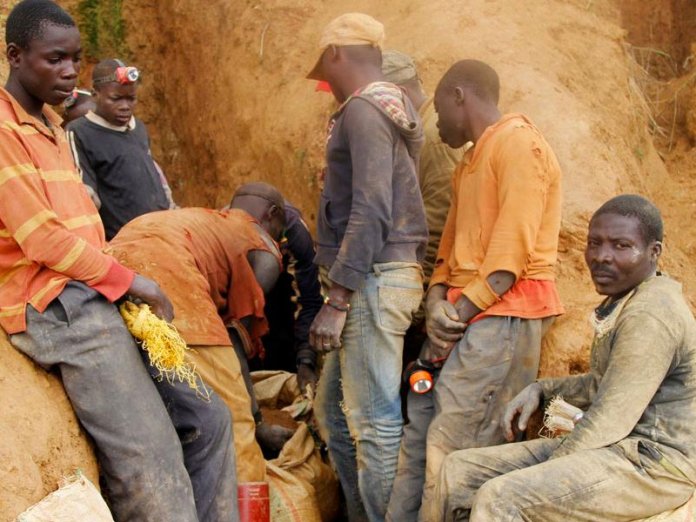 Thousands of illegal miners purportedly from Mali, a Franco-phone country in West Africa, who allegedly entered and settled in Osun State, have been generating fear among the residents of the state.

THISDAY investigation revealed that between April 2017 and February 2019, no fewer than 6,000 illegal miners from Bamako, the capital of Mali and its environs, settled in Ijesa land in Osun East senatorial district to work as labourers at the various illegal mining sites located in the area.

THISDAY however gathered that the immigrants have taken advantage of the porous Nigerian land boarders to enter the country in droves, not minding that they do not possess legal document supporting their expedition in the country.

A source, who spoke under the condition of anonymity, told THISDY that the ‘illegal’ miners from Mali have been linked with several criminal activities, ranging from highway robberies to kidnappings among others.

The source frowned at the Nigeria Immigration Service (NIS) for not living up to its statutory obligation of regulating and monitoring migration into the country.

He stressed that with the way the illegal migrants besiege the state without check and action, there was no immediate solution to security challenges facing the state.

The source contended that the government has been scratching the issue on the surface rather than tackling it from the root to get desired result.

However, he added that “the people of the state are worried with the influx of number of Malians coming into the state without steps to stop them as well as regulate their activities.

“We even learnt that many of them are just disguising as miners while in reality, they are criminal elements terrorising innocent citizens in the state.”

THISDAY reliably gathered that the early set of miners who came into the state in 2017 were the ones who invited some of their friends with criminal tendencies, who have now allegedly started unleashing terrors on the people of the state.

“I believe that many of the security agencies in the state are aware of this through their intelligence gathering mechanism, otherwise, there is little or nothing to be achieved in the efforts to stamp out insecurity in the state.

“You will agree with me that Mali is one of the most volatile countries in West Africa; the base of Alshabab, a deadly Islamic extremists carrying out nefarious activities on the African continent, even up to Kenya in the east Africa region.

“I think it is pertinent to look into this security threat and take action without delay before it degenerates further,” the source said.

He lamented the influx of these foreigners into the community, saying every resident of the community is apprehensive over the development.

He noted that majority of the miners working in the community and adjourning villages are from Mali and are very hostile to the people of the area.

Consequently, a civil society organisation working in the state, Advocacy for Peace in Africa, has expressed concern over the issue, citing various criminal activities in the past that linked heavy presence of foreigners in the area with insecurity.

The state Coordinator of the organisation, Sunday Adams, stressed that plethora accounts of victims of kidnappings and robberies on the Akure -Ibadan expressway have given credence to the suspicion that some of those migrants from Mali, who claimed to have come to work at mining sites were also responsible for the criminal activities on the expressway.

Adams opined that: “You remember what the Professor from Obafemi Awolowo University in Ile-ife, who was kidnapped on that road, recently said. He said that those who kidnapped him were of French-speaking Fulani extractions with highly sophisticated weapons.

“That remarkable revelation laid credence to the concern of many discerning residents in the state that many of those miners from Mali, who came into the state for mining jobs, are criminals terrorising innocents Nigerians on that road.

“Equally, an eye witness at the scene where a local government worker was killed by armed men in Ikire, a location very close to the place in which the professor was kidnapped, gave the same account of set of criminals wielding highly sophisticated weapons, and communicating in French.

“However it is clear that the state has been infiltrated by foreign criminals without any positive move by security agencies to nip such in the bud and keep the state safe.”

While speaking further on the issues, the state Police Public Relations Officer, SP Folashade Odoro, said although some arrests were made in the past, there was no specific identification of any suspect as Malian.

“I cannot specifically state that any national from Mali was arrested; I can’t remember we made such arrest,” Odoro stated.

Also, the Nigeria Immigration Service (NIS), Osun State Command, has declined comment when contacted for reaction on the issues.

A source in the command who pleaded anonymity confided in THISDAY that nothing much has been done to check the influx of illegal migrants mainly from Mali into the state.

He, however, claimed that some arrests were made sometimes ago, adding that the command under the former Comptroller of Immigration Service in the state, Idowu Adebowale “deported those suspects.”