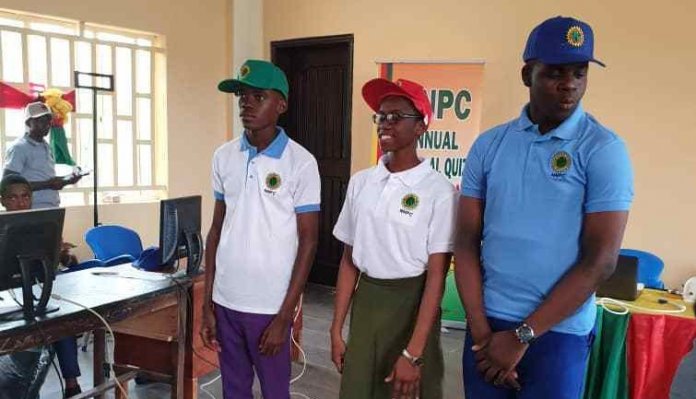 The zonal stage of the NNPC Annual National Science Quiz Competition for 2019 has ended with Ogun State leading in the score chart.

A statement by the corporation’s Group General Manager, Public Affairs Division, Mr. Ndu Ughamadu disclosed that the representative of Ogun State at the South-west zonal competition, Ojo Samuel scored 70 points, which is the highest score among the finalists that emerged from the six geo-political zones of the country.

The two other finalists from the South-west Zone, Aliyu Kayode and Akintade Abdullah are representatives of Lagos and Osun States, who scored 60 and 55 points respectively.

According to Ughamadu, a total of 18 students emerged at the zonal leg of the competition which held in Owerri (South-east), Uyo (South-south), Bauchi (North-east), Minna (North-central), Katsina (North-west), and Oshogbo (South-west) as part of the preparations for the 2019 edition of the competition.

In the South-east Zone, the representatives of Ebonyi and Imo States, Mbazu Chinonso and Ozuzu Adaeze scored 55 points each to emerge first, while Nwachukwu Ugochukwu, representing Abia State came third with 50 points.

The representative of Kogi State, Abdullahi Omachonu came first with 60 points in the North-central Zone, while the representatives of Benue and FCT Abuja, Egbuiba Chetachukwu and Aimofumhe Eshiobomhe tied at second position with 55 points apiece.
Utibeabasi Bassey representing Akwa Ibom State emerged first position in the South-south Zone with 60 points, while Osayawe Oduwa and Okogbenin Williams of Bayelsa and Edo States scored 55 points each to emerge second.

The 18 finalists will represent their various geopolitical zones at the grand finale of the competition scheduled to hold in September 2019.

The competition was set up as a core element of NNPC’s Corporate Social Responsibility (CSR) package to promote science education in the country; prepare students for promotional and qualifying examinations; and build friendship among the participating students.

Other objectives are: “to develop students’ competitive spirit; to break down long-held stereotypes and engender a better sense of national being in participating students; and provide a platform for enlightening the students and the public on the activities of NNPC.”

Speaking further on the competition, Ughamadu stated: “Every year, the corporation through this programme raises scholars of repute. The exercise has deepened the interest of our young students to study science, and we are encouraged by the quality of scholars and their performances at various leading universities across the globe. We hope the winners of this year’s edition will follow on the path of academic excellence.”