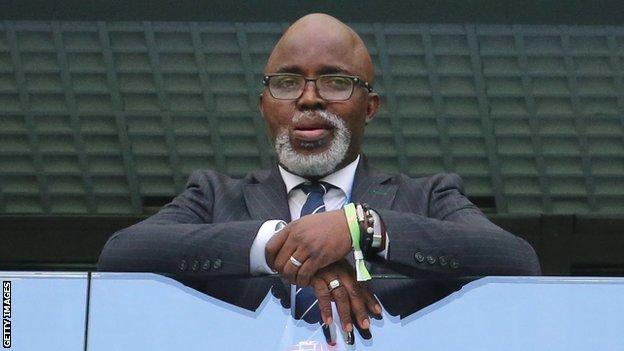 In the midst of discordant tunes on why Amaju Melvin Pinnick was not re-nominated as first vice president of the Confederation of African Football (CAF) at its Ordinary General Assembly last Thursday, an Executive Committee Member of the body and former Liberia FA President, Musa Bility has urged Nigerians to be proud of the football administrator.

Speaking on Brila FM yesterday, Bility described Pinnick as a very honest administrator who has been selfless in his service as a CAF top shot and has taken Nigeria to very great heights in football administration.

“The worst decision ever made by CAF President, Ahmad, was not to have kept Amaju as the first vice president. Amaju is a symbol of unity and a rallying point whenever there was any issue amongst members.

“Only God knows what will happen now but Nigerians should be proud of this man who has brought greatness to the country,” observed Bility who had earlier resigned from CAF’s committees due to the leadership style of Ahmad.

The former Liberian FA boss shed light on the recent happenings in CAF and the CAF-FIFA collaboration.

With FIFA Ethics Committee investigating Ahmad for many infractions bothering on corruption, Bility insisted that the apex football body in Africa requires a very thorough forensic audit to unravel some of the allegations of serious financial scandals.

“A very thorough forensic audit has to be conducted to cleanse CAF and I can boldly say that Pinnick is a man with integrity and has never been involved in any form of corruption, whether financial or material,” stressed Bility.

Pinnick who was part of the young Turks that spearheaded end to the reign of Isa Hayatou and installed Ahmad, fell out with the Madagascan purely on matters of principles.

The NFF president wrote a four-page letter to Ahmad in April where he highlighted actions taken by the CAF boss considered inimical to the growth of the continental football body.

However, Ahmad considered the letter an affront and not complimentary. Some executive committee members who were not comfortable with the chummy relationship between the two saw it as opportunity to pull the rug from Pinnick’s legs.

This perhaps must have informed Ahmad’s refusal to re nominate Pinnick for the First Vice President post, preferring instead D.R Congo’s Constant Omari as replacement.