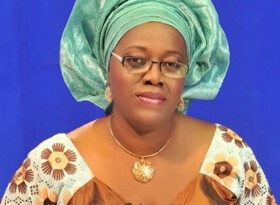 The journey of a thousand miles begins with a single step. When Chinese philosopher Lao Tzu uttered these immortal words so many years before Christ, he might have as well time-travelled into the future and witnessed the humble beginnings and glorious destination of Tosin Dokpesi, the Managing Director of Africa Independent Television, a subsidiary of DAAR Communications Limited, Nigeria’s preeminent private television station, and wife of its founder, the High Chief Raymond Dokpesi.

On July 12, the Edo-born lady of brilliance and beauty, Dr. Oluwatosin Folake Abimbola Dokpesi, joined the golden club. The entire DAAR family, friends, family and high society were on hand at the Guzape District, Asokoro Abuja venue of the grand occasion. Tosin, who usually prefers to keep a low profile, was out on style on her happy day. She was beaming and full of happiness as she cut the giant cake in company of her husband, daughter and friends.

Fifty years on since she uttered her natal cry, Tosin can look at a life spent confounding the doubters and outdoing even her own wildest dreams. Such is the fate of determined individuals who shrug off dust poured on them by naysayers and squarely hammer at the glass ceiling until it breaks. Briefly exchanging her passion for expediency, she studied zoology at the University of Lagos. But her passion for communicating with millions through the medium of the television tube would not be denied. Tosin retraced her steps and swiftly earned a postgraduate degree in mass communications.

From Multimedia Limited to Clapperboard TV and finally to DAAR Communications, Tosin wouldn’t stop flying until she found a place she finally called home. Her clear, limpid gaze and refreshing manner of disseminating news quickly caught the eye and the former Miss Tosin Odukoya became the face of AIT.
Lasting romance followed on the heels of lasting relevance in her chosen career. The high chief fell head over heels in love and the rest is history. Twenty-three years at DAAR Communications and seventeen years as Mrs Tosin Dokpesi later, she is a fulfilled mother, wife and career woman.