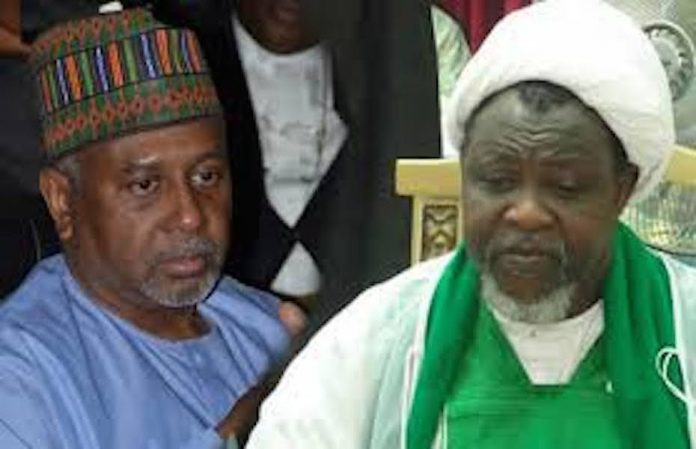 As far as the matters of Col. Sambo Dasuki and Sheikh Ibrahim El-zakzaky are concerned, the federal government cannot continue to trample on the rule of law for political correctness, writes Shola Oyeyipo

Since no institution has the powers to select which court judgments to obey or ignore, it is time the Federal Government of Nigeria allows the rule of law to take its course in the cases of the former National Security Adviser (NSA) under President Goodluck Jonathan, Colonel Sambo Dasuki (rtd) and the leader of Shi’ites Islamic Movement of Nigeria, Sheikh Ibrahim El-Zakzaky

So many people have speculated many reasons why the federal government opted to ignore several court declarations that Dasuki and El-Zakzaky be granted bails.
In Dasuki’s case, he is facing charges over alleged complicity in a $2 billion arms procurement deal in Nigeria, which purportedly led to the mismanagement of the said sum under the supervision of the embattled NSA. He was also accused of being in possession of prohibited firearms without the requisite licenses in July 2015, contrary to Section 28 of the Firearm Act Laws of the Federation of Nigeria 2004. He was alleged to have in his possession a Trevor Rifles at his Abuja home.

Aside that, Dasuki, also has questions to answer in a money-laundering allegation. The sum of $40,000, N5million and £20, 000 were allegedly found in his house in July 2015. The law enforcement agencies were of the views that the monies were proceeds of unlawful act, which is punishable under Section 15 (3) of the money laundering prohibition act 2011.
The amended charge also indicated that $150,000 and N37 million being part of proceeds of unlawful act was also found in the Sokoto residence of former NSA on July 16, 2015.

While it is difficult to ascertain the level of complicity of the former NSA in the array of allegations against his person, in the usual blatant disrespect that successive Nigerian governments had shown to the rule of law, the President Muhammadu Buhari leadership has continued to ignore various court pronouncements granting Dasuki bail. For the umpteenth time, the sixth time to be precise, the Federal High Court in Abuja on Monday, July 2, granted another bail to Dasuki so that he could gain freedom from the custody of the Department of State Services (DSS), where he had been for four years.
Justice Ijeoma Ojukwu, who granted him bail in the sum of N200m with two sureties in like sum, was of the view that his detention since December 29, 2015, was not justifiable.

“The respondents have not successfully justified the long and continued detention of the defendant. Based on the circumstances of this case and the established facts, the honourable court is of the humble but firm opinion and as affirmed by superior authorities that the applicant (Dasuki) has made out a case to warrant the intervention of this court,” Justice Ojukwu stated in her ruling, insisting that his detention was “an aberration of the rule of law.”
Dasuki was first granted bail on August 30, 2015, by former presiding judge of the federal Capital Territory (FCT) High Court, Justice Adeniyi Ademola, on self-recognition following no objections by Mohammed Diri, the prosecuting counsel.

On December 18, 2015, Justice Hussein Baba Yusuf of the FCT High Court granted Dasuki bail in the sum of N250 million alongside a Director of Finance in the office of the NSA, Salisu Shuaibu and one other person, Aminu Kusa. They were asked to provide a surety that owns a property in the FCT worth N250 million.
The Economic Community of West African States Court of Justice on October 4, 2016, declared Dasuki’s arrest and continued detention as unlawful, arbitrary and a violation of his right to liberty. The court ordered that he should be released from the custody of the DSS, whose operatives re-arrested him shortly after he was released from Kuje Prison, Abuja on bail on December 29, 2015.
The court, in a unanimous judgment of a three-man panel, read by Justice Chijioke Nwoke, also awarded N15m damages against the federal government.
Again, on January 24, 2017, Justice Yusuf reaffirmed Dasuki’s bail on the grounds that he was entitled to it, particularly because he had been admitted to bail since 2015, when the federal government brought criminal charges against him.

Counsel to Dasuki, Ahmed Raji had applied to the court to reaffirm the bail granted him and which he has not been allowed to enjoy since December 2015.
Later on April 5, 2017, the presiding judge of the FCT High Court, Justice Ahmed Mohammed, reaffirmed the 2015 bail granted Dasuki after hearing his appeal of the amended seven-count charge against him. Mohammed said since the prosecution counsel, Oladipo Opeseyi, did not object to Dasuki’s appeal, so the court had to affirm the bail.
On May 18, 2018 Justice Yusuf ruled that Dasuki and others continue to enjoy the bail he granted them in 2015, when they were first arraigned before his court.
Just as in Dasuki’s case, the leader of the Islamic Movement in Nigeria, Sheikh Ibrahim El-Zakzaky, has been granted bail by a Federal High Court sitting in Abuja and presided over by Justice Gabriel Kolawole.

Justice Kolawole also granted El-Zakzaky’s wife, Zeenatudeen, ordered their immediate and unconditional release and fined the federal government N50 million for the incarceration of the duo. Both of them were to be paid N25 million each.
But despite that, El-Zakzaky and his wife have been in detention since December 2015 and it is this situation that has been precipitating spontaneous violent protests by his supporters, who have been demanding his release to enable him take medical treatment.
For many observers, there is more to the Dasuki and El-Zakzaky issues than meets the eye. In fact, immediate past Attorney General of the Federation and Minister of Justice, Abubakar Malami, had been criticised for his position on the matter in the audio recording of an interview he granted the Voice of America (VOA), where he accused Dasuki of being responsible for the deaths of over 100,000 Nigerians during Jonathan’s era.

In what is clearly prejudicial, Malami had said; “Remember, we are talking about a person who was instrumental to the deaths of over 100,000 people. Are you saying that the rights of one person are more important than that of 100,000, who lost their lives?”
While many well-meaning Nigerians have continued to harp on the need for the federal government to respect the series of court pronouncements on the matter, lawmakers in the House of Representatives recently lend their voices to the growing calls for the government to manage the El-Zakzaky issue with caution so as not to allow it degenerate into another Boko Haram sect.

The lawmakers urged the federal government to urgently engage the Shi’ites group so as to amicably resolve their grievances and avoid a repetition of what gave birth to the Boko Haram crisis, which the government is currently battling to curtail.
The House of Representatives, penultimate week, adopted a motion of urgent national importance moved by the Minority Leader, Hon. Ndudi Elumelu on the recent invasion of the National Assembly by members of the Shi’ites movement, which left nine police officers injured and several properties destroyed.
In their various contributions to the debate, the lawmakers tasked government to handle the situation with seriousness and prevent it from escalating like the case of Boko Haram.

Speaking against the background of his experience in the emergence of the Boko Haram crisis, the Chief Whip, Hon Mohammed Monguno representing Jere federal constituency, Borno State, said: “There are danger signals coming from the present crisis of the Shiite sect going about clamouring for the freedom of their leader.”
Hon. Bamidele Salam representing Ede North, Ede South, Egbedore and Ejigbo federal constituency, Osun State, also urged government on the need for Nigeria to be very futuristic about the Shiite matter and “address the root cause of this brewing insurgence.”
In the same vein, Hon. Onofiuk Luke representing Etinan/Nsit Ibom/Nsit Ubium federal constituency, who raised a point of order premised on Section 4(1) (2) of the constitution of the Federal Republic of Nigeria, said the debate on the Shiite invasion of the National Assembly should not be narrowed down to when the members of the legislature are threatened.

Fearing that if the issue has not been addressed with seriousness by government and that one day, the lawmakers might run away leaving the mace being their symbol of authority, Dachung Musa Bagos representing Jos South/Jos East federal constituency, Plateau State, challenged the government to rise to the occasion.
“The federal government should rise to see that the issue of the Shi’ites group is treated with all seriousness, because as far as I am concerned, it has been treated with levity. We need to see how this issue will be treated as a national issue, because if we are not careful, another Boko Haram will rise from another angle.”
As it is, a word should be enough for the wise. As a show of respect for rule of law, it is time the federal government allowed those being held against court rulings to enjoy their bail, while both parties seek justice.
Pix: Dasuki.jpg and El-Zakzaky.jpg