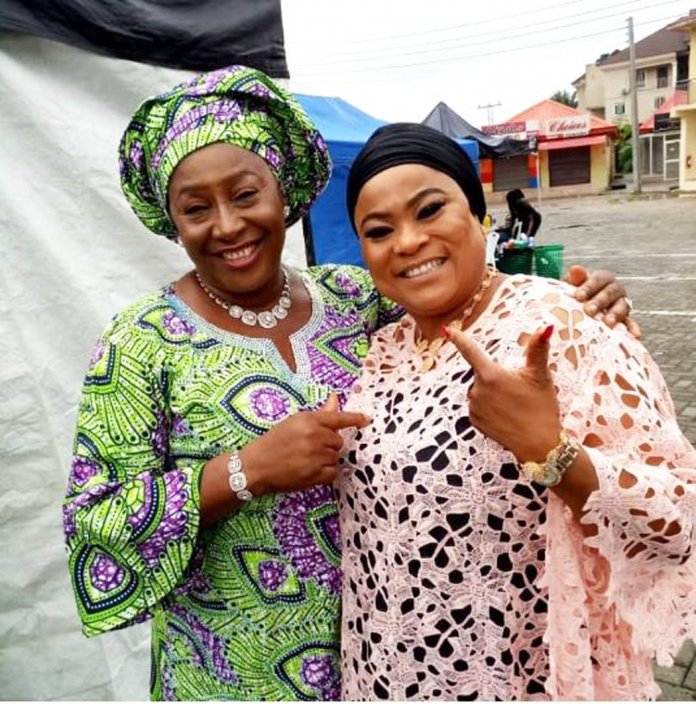 The perennial rivalry between Nollywood jewels, Sola Sobowale aka “Toyin Tomato” and Patience Ozokwor alias “Mama Gee”, has been taken to new levels in the new television commercial recently released by Nigeria’s number one corporate promoter of Arts and Entertainment, Globacom.

In the commercial titled “Baby Babble”, Globacom demonstrates the exceptional speed, quality, reach and efficiency of the Glo 4G service. The duo re-enacted the petty jealousies and animosities underpinning relationships among some female traders who tried to “out-do” each other in all areas of endeavour.

The conflict took place in a supermarket where Sobowale claimed that Patience Ozokwor was stalking her and called her “Follow-follow”. A clash then ensued first with the trolley race which Patience won when Sola was blocked by a cleaner preventing her from getting to the cashier point first.

On getting to the cashier, they both struggled to placate a tearful child with Patience saying, “she does not want over ripe things” and Sola labeling her “dudu by nature”. Patience, thereafter, put a call to her daughter, acted by Uche Nwaefuna, to send her a child’s placatory video which landed instantly on her phone and I-pad which was downloaded in a jiffy. It was a smart way to show the efficiency of the Glo data network. Sola Sobowale took Patience’s ipad and used it to lull the baby. The child was comforted and even laughed at the video, while the appreciative mother (Bimbo Thomas) who suddenly realised that the baby had gone quiet, thanked Sola Sobowale for the gesture, thinking that she was the owner of the i-pad.

The video elicited laughter from the child.  Patience, on realising that her rival was having the upper hand, snatched the ipad,  leaving Sola Sobowale with a smug smile of victory in the “who can lull the baby” challenge.

Ozokwor and Sobowale have regularly been cast as alter egos in films, skits and television commercials where they antagonize each other to entertain the audience with compelling stories enacted to resonate with the target audience.

The new TVC is a sequel to an earlier one which featured the duo and Juju musician, King Sunny Ade.