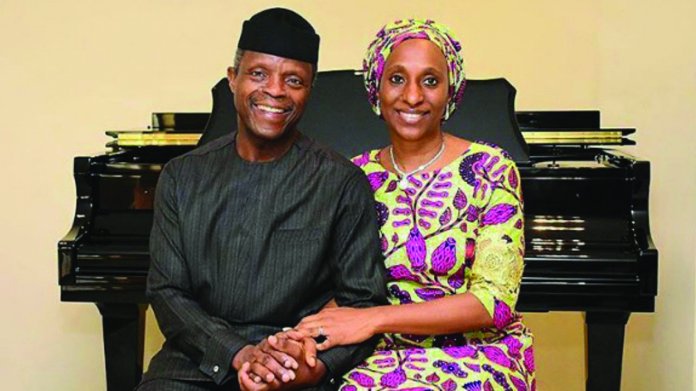 With an image so unpretentious and riddled with simplicity, wife of the Vice President, Mrs. Dolapo Osinbajo has embellished minds in most profound ways at 52, writes Ferdinand Ekechukwu

As she turned 52 barely few days ago on July 15, it was not surprising the amount of congratulatory messages and birthday wishes from Nigerians that poured in for Dolapo Osinbajo, wife of Vice President Yemi Osinbajo. As befitting and immense as the messages that greeted her were, Mrs. Osinbajo has displayed exemplary manner of how to be a supportive wife to public office holders that attracted such heartfelt wishes and greetings from across the nation.

To celebrate her memorable day, she shared a photo from her first birthday celebration on her Instagram page with the caption ‘Thanking God for another birthday…’ and with surplus praise to God. She wrote:

NOW THANK WE ALL OUR GOD,

Now thank we all our God,

with heart and hands and voices,

who wondrous things has done,

in whom this world rejoices;

who from our mothers’ arms

has blessed us on our way

with countless gifts of love,

and still is ours today

As personifying as the message appears, it could be said to be significant with her moral values, reverence and what she truly represents. Dolapo is a role model for other women in good families and other families in search of their moral values and identities. With an image so unpretentious and riddled with simplicity, she has embellished minds in most profound ways. Not one like a two-faced individual.

Ominously well-cultured woman – very respectful, faithful, loyal and friendly to everyone she comes across. Dolapo is a cultural icon and renaissance – and one of the cultural representations of the Yoruba unique tradition. It is mesmerising to see the wife of the Vice President of Nigeria genuflecting admirably to the admiration of Baba Buhari, the President of the Federal Republic of Nigeria.

By observation in her appearance and beauty, the wife of the Vice President is a passionate woman. In substance and value, she beautifies potent minds. In grace and blessings, God endows her with refinement of movement, elegance and contingent of contentment. Her journey is such that is reflective of respect, decency and humane demeanor.

Speaking about his wife, the Vice President Prof. Osinbajo noted: “It is impossible to thank God enough; I and my family have too many reasons to thank God. One day, my wife and I reflected on how unlikely our journey here is.

She reminded me that all she wanted was a quiet life as one of the many families of academics living on the university campus. If someone had said to me in 2013, ‘you will be campaigning across the country; you will win the elections and become Vice President of Nigeria’ I would, because I am generally polite, have said amen but in my heart, say what a crazy chap!”

The beautiful mother of three has a pedigree of being the granddaughter of Nigerian statesman, Chief Obafemi Awolowo of blessed memory. Her wedding to her heartthrob Yemi Osinbajo seems predestined. To start with, the tale goes that Yemi and Dolapo are relations who have known each other since childhood and once worshipped in the same church. A popular picture of the pair recently taken of them looking at each other in the most adorable way ever portrays them as inseparable souls.

In 2007, Prof. Osinbajo and his wife founded “The Orderly Society Trust”, a non-governmental organisation that is dedicated to the promotion of Christian ethics and orderliness. The couple is blessed with two daughters and a son. A lawyer, the quintessential Dolapo Osinbajo is the leader of the Ladies Fellowship of the Redeemed Christian Church of God (RCCG), Jesus House Parish.

In October 2014, Mrs. Osinbajo launched her book, “They Call Me Mama, From the Under Bridge Diaries” in Lagos. She said that her drive to write the book came from her experiences with some street boys and men in Lagos State, and with the book, she aims to give them a human face. Recounting how she spent about 10 years with street urchins under several notorious Lagos bridges in a bid to reshape their lives, the second lady noted that some of them too have parents in the church.

“Some of them have parents with very big names. There are some streets in Lagos that the names of the streets are names of people, some of which have their children under the bridge. There were people whose parents lived in America and yet their children were under the bridge. So, do not imagine that it cannot happen to you, but you must be  an exemple in your conduct.”

An icon of inspiration to the women and youth, Mrs. Osinbajo under the auspices of her pet ‘Project Ayodele’, a foundation established with her brothers has made significant impact in the lives of people associated with it across the country. Through the project set up to immortalise her late mum, she has empowered over a million women and youth in the area of skills acquisition that would make them self-employed.

That women had been relegated to the background as a result of ignorance of their potentials is now of the past. This she believes that the empowerment of women and youths would liberate them from economic hardship, subjugation and make them self-reliant. Her resolve that women were now a force to reckon with in nation building worldwide is firmly rooted in the objective of the enablement programme of ‘Project Ayodele’ to empower beneficiaries to achieve a good level of financial independence and provide effective support for their families.