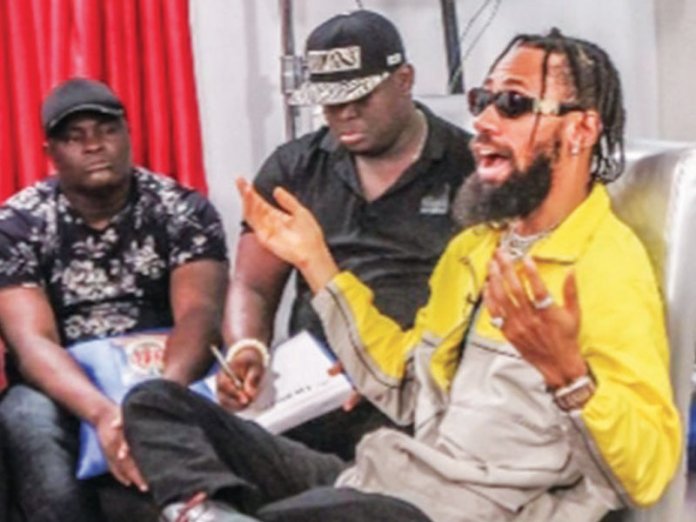 Quarterfinalists of the ongoing Hi-Life Fest had a surprise visit during their week-long mentorship program recently. Veteran highlife singer, Sunny Nneji, rapper Phyno, popular music producer Selebobo and ‘Pullover’ crooner KCee paid them a visit during the week to offer some tips and advice on the music industry.

The eight hopefuls were privileged to have a one-one with the music stars as each of them encouraged them not to give up on their passion. Selebobo who was the first to have an interaction with them reminded them that the competition is just the beginning of their journey.

The producer who became popular for producing Yemi Alade’s 2013 smash hit ‘Johnny’ has been in the music scene for over 10 years. He is also a frequent collaborator with artistes such as Iyanya, Tekno and a host of other A-list performers. With him, they understood that a journey of a thousand miles starts with a step. They are already taking that step with the highlife competition.

The contestants were visibly humbled to have Neji graced them with his presence. They humbly shook his hands and listened attentively to every word that spilled from his mouth as if their whole life depended on it.

The ‘Tolo Tolo’ crooner shared some tips about how he has remained relevant in the industry and reminded them to always be humble and open to learning.

With KCee, who is also a product of a music reality show, Star Quest, the discussion dwelled on identifying opportunities and taking advantage of it. He took them down memory lane on his own time as a contestant and charged them to keep their focus on the finishing line.

For Phyno, the quarterfinalists gave him a standing ovation. The indigenous rapper who is also the Life Lager brand ambassador commanded great respect from the contestants, largely due to his consistency in promoting indigenous music.

Like others, Phyno took his time to share the story of his meteoric progress in the music industry, while also commending Life Lager for giving young talented musicians a platform such as this.

Hi-Life Fest 2019 has lived up to its billing as the number one indigenous music show celebrating the culture and progress of the people. The contestants are set to be back in action on Sunday, July 21 when the quarterfinals will be holding in the garden city of Port Harcourt.