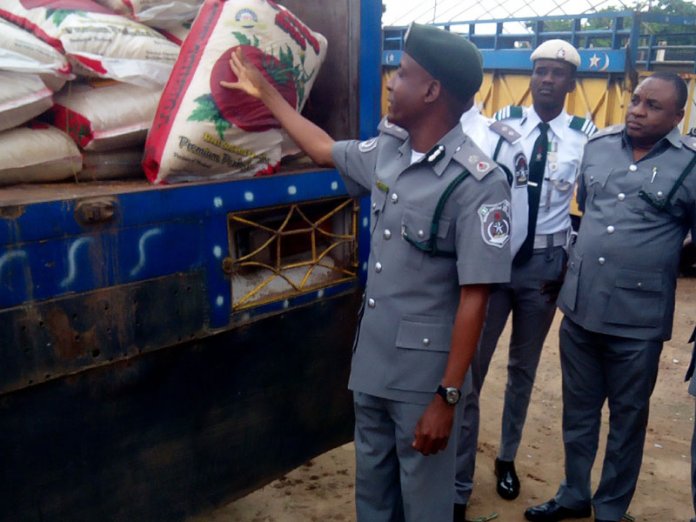 By Laleye Dipo In Minna

The Nigeria Customs Service (NCS) has impounded 589 bags of rice smuggled into the country through the Banana border town with Benin Republic and along the Mokwa -Jebba road in Niger State.

The smuggled items has a total duty paid value of N6.8 million.

The Customs Area Controller in charge of Niger, Kwara, Kogi States and the Federal Capital Territory (FCT), Alhaji Abba Kassim, who disclosed this to newsmen in Minna, Niger State on Thursday, said two people have been arrested in connection with the illegal act while other smugglers “ran into the bush”.

Kassim said three trucks used to smuggle the rice were also seized, adding that some of the bags of rice were hidden under bags of maize in the vehicles.

The Area Controller said the latest seizure of the bags of rice has brought to about 3,000 bags of the commodity seized by the command with a duty paid value of over N54.2 million since the beginning of the year.

He also said that apart from the three trucks used to ferry the smuggled rice, the command has also impounded 29 used vehicles calculated to cost N23.780 million, as well as 22 bales of second hand clothes worth N792,000.

Kassim further said that since the conclusion of the general election in the country last March, the activities of smugglers had increased just as officials of the command had been more diligent in the performance of their duty leading also to an increase in the revenue generated by the command.

He also disclosed that the command generated over N1.709 billion between January and June this year which was N237,813,975.82 above what was realised the same period last year.

While commending the efforts of his men for always “tracking down smugglers”, he assured them that their efforts to check smuggling will not go in vain.

“We are intensifying patrol and intelligence gathering. Those of our staff who perform well will be rewarded with promotion and financially,” Abba Kassim declared.

He urged smugglers to desist from the illegal act, saying: “They should go into legitimate business.”