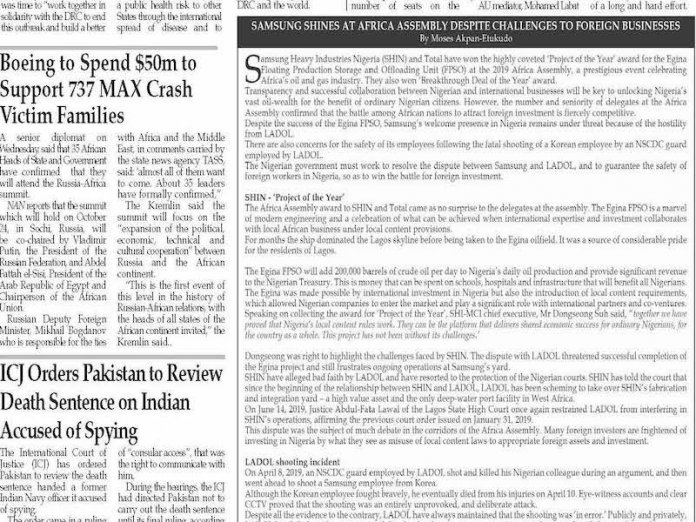 Samsung Heavy Industries Nigeria (SHIN) and Total have won the highly coveted ‘Project of the Year’ award for the Egina Floating Production Storage and Offloading Unit (FPSO) at the 2019 Africa Assembly, a prestigious event celebrating Africa’s oil and gas industry. They also won ‘Breakthrough Deal of the Year’ award.

Transparency and successful collaboration between Nigerian and international businesses will be key to unlocking Nigeria’s vast oil-wealth for the benefit of ordinary Nigerian citizens. However, the number and seniority of delegates at the Africa Assembly confirmed that the battle among African nations to attract foreign investment is fiercely competitive.

Despite the success of the Egina FPSO, Samsung’s welcome presence in Nigeria remains under threat because of the hostility from LADOL.

There are also concerns for the safety of its employees following the fatal shooting of a Korean employee by an NSCDC guard employed by LADOL.

The Nigerian government must work to resolve the dispute between Samsung and LADOL, and to guarantee the safety of foreign workers in Nigeria, so as to win the battle for foreign investment.

SHIN – ‘Project of the Year’

The Africa Assembly award to SHIN and Total came as no surprise to the delegates at the assembly. The Egina FPSO is a marvel of modern engineering and a celebration of what can be achieved when international expertise and investment collaborates with local African business under local content provisions.

For months the ship dominated the Lagos skyline before being taken to the Egina oilfield. It was a source of considerable pride for the residents of Lagos.

The Egina FPSO will add 200,000 barrels of crude oil per day to Nigeria’s daily oil production and provide significant revenue to the Nigerian Treasury. This is money that can be spent on schools, hospitals and infrastructure that will benefit all Nigerians.

The Egina was made possible by international investment in Nigeria but also the introduction of local content requirements, which allowed Nigerian companies to enter the market and play a significant role with international partners and co-ventures.

Speaking on collecting the award for ‘Project of the Year’, SHI-MCI chief executive, Mr Dongseong Suh said, “together we have proved that Nigeria’s local content rules work. They can be the platform that delivers shared economic success for ordinary Nigerians, for the country as a whole. This project has not been without its challenges.’

Dongseong was right to highlight the challenges faced by SHIN. The dispute with LADOL threatened successful completion of the Egina project and still frustrates ongoing operations at Samsung’s yard.

SHIN have alleged bad faith by LADOL and have resorted to the protection of the Nigerian courts. SHIN has told the court that since the beginning of the relationship between SHIN and LADOL, LADOL has been scheming to take over SHIN’s fabrication and integration yard – a high value asset and the only deep-water port facility in West Africa.

This dispute was the subject of much debate in the corridors of the Africa Assembly. Many foreign investors are frightened of investing in Nigeria by what they see as misuse of local content laws to appropriate foreign assets and investment.

On April 8, 2019, an NSCDC guard employed by LADOL shot and killed his Nigerian colleague during an argument, and then went ahead to shoot a Samsung employee from Korea.

Although the Korean employee fought bravely, he eventually died from his injuries on April 10. Eye-witness accounts and clear CCTV proved that the shooting was an entirely unprovoked, and deliberate attack.

Despite all the evidence to the contrary, LADOL have always maintained that the shooting was ‘in error.’ Publicly and privately, LADOL has failed to take any responsibility for the shooting, or to review its procedures to identify lessons learned.

On July 10, 2019 the NSCDC dismissed the gunman, who had already been handed to the police for prosecution. The Commandant General of the NSCDC, Abdullahi Gana Mohammed revealed that, “We set up a panel to investigate the incident and it has recommended his [Oshemi’s] dismissal and prosecution, which we have already implemented…”

The impact of this shooting was felt far and wide – not only in Nigeria but also in Korea and across other African nations looking to attract foreign investment. Foreign businesses looking to invest in Nigeria will be pleased by positive steps taken by the NSCDC.

When receiving the award, Mr. Dongseong Suh also said, “It is clear that we need to do more, together to ensure that Nigeria is an ideal place for conducting business.” These are important words.

The challenges that SHIN has faced in Nigeria made the successful delivery of the Egina even more of an achievement worthy of the ‘Project of the Year’ award at the Africa Assembly. However, these challenges must also be a salutary lesson to key decision-makers within Government. They should not be the experience of other foreign businesses if Nigeria is ever able to compete with its African neighbours for foreign investment.