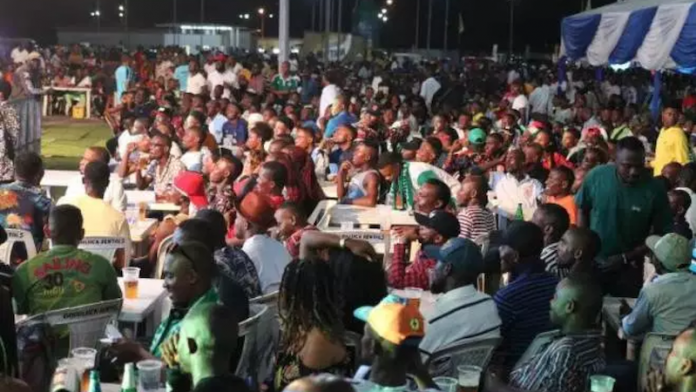 The Star Fan Parks situated in different locations all over the country witnessed an unprecedented number of fans on Sunday as many trooped in for the Africa Cup of Nations semi-final contest between the Super Eagles and the Desert Foxes of Algeria.

While optimism was high that Coach Gernot Rohr’s men would soar past their North African rivals to book their place in another AFCON final, a late free-kick expertly taken by Riyad Mahrez broke the heart of the enthusiastic fans who were nonetheless given a royal treatment by Nigerian Breweries through its Premium brand, Star Lager.

Since the commencement of the 2019 AFCON, the Star Fan Parks across the country have been a bee-hive of activities but it was turbo-charged for Sunday’s semi-final duel.

At the National Stadium in Lagos, popular OAP, Tony Bekederemo was on ground to moderate the insightful analysis by the fans and he also dished out prizes on behalf for Star Lager as the Official Super Eagles beer kept to its promise of rewarding their loyal customers and passionate football fans.

At half time when the Super Eagles were one goal down owing to the unfortunate own-goal scored by defence marshal William Troost-Ekong, the fans were unanimous in the ability of team coming back into the game.

The atmosphere was better experienced than imagined when indeed Odion Ighalo got the equaliser from the penalty spot as it sparked wild jubilation among the fans at the Star Fan Park.

Just when people were refueling with more Star Lager in anticipation of a long night, Mahrez struck with his deadly free-kick and that broke the heart of all.

“ I am very sad that the Super Eagles did not make it to the final but that is football, this is my first time at the Star Fan Park and it is amazing.

“I am just imagining how it would have been on Friday if it’s Nigeria that would be playing the final,” Adeoti Kolade one of the fans present on Sunday at the Abuja end of the Star Fan Park stated.

Despite the Super Eagles’ defeat, the usual raffle draw was still conducted and lucky fans won prizes like jerseys, rug, clippers and other mouthwatering prizes

The winners thank Star Larger for giving them a unique AFCON experience while they urged the Super Eagles to ensure they win their third-place game and not return home empty-handed.