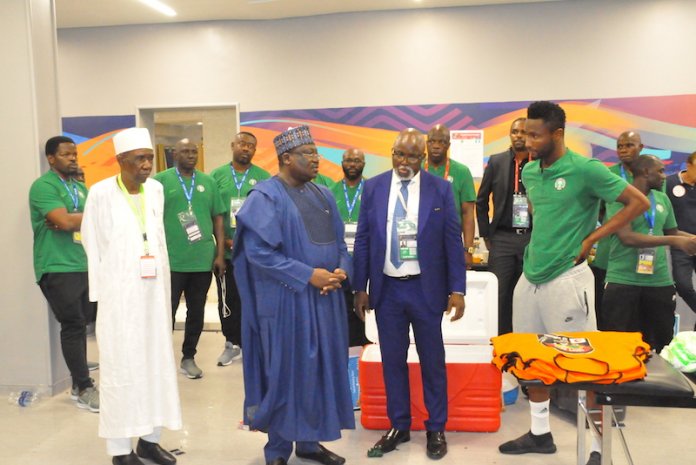 Head of the Federal Government delegation to the 32nd Africa Cup of Nations in Egypt, Senator Ahmed Ibrahim Lawan who also doubles as the President of the Senate of the Federal Republic has given the Super Eagles a pat on the back for their outing against Algeria on Sunday, while charging them to go all out against Tunisia on Wednesday to win the bronze medals.

The Senate President was at the Eagles’ dressing room at the Cairo International Stadium after the 2-1 defeat by the Desert Foxes of Algeria, which sent the North Africans into Friday’s final and Nigeria into Wednesday’s third place game.

“The Government of Nigeria is proud of you and how far you have been able to go in this competition. You worked very hard and showed the desire to win, but this is football and these things happen.

“The third place match is there and you have to forget the result of this match and prepare very well to win the bronze medals.”

Similarly, President of the Nigeria Football Federation, Mr. Amaju Melvin Pinnick, alongside his 2nd Vice President, Shehu Dikko and General Secretary, Dr. Mohammed Sanusi were on Monday at the Le Meridien Cairo Airport hotel camp of the Super Eagles to ginger the players ahead of Wednesday’s third place match against Tunisia.

A last-gasp goal by Riyad Mahrez took Algeria to their first AFCON Final in 29 years and meant the Eagles will have to battle for the bronze medals with Tunisia, who lost to Senegal also on Sunday.

“I must start by acknowledging that you gave your best out there against Algeria as you have done since the beginning of the competition. It is important that you put the loss behind you as the third place match is just two days away. The message from the NFF is simple: Let us not leave this championship empty –handed. This is the biggest and toughest AFCON ever and we must win on Wednesday to make Nigerians happy again.

“It is good for us to win laurel here that we can present to His Excellency, President Muhammadu Buhari (GCFR) back home. The Government and the people of Nigeria have supported this campaign in a robust manner.”

Team captain Mikel John Obi promised that the team will fight hard against the Carthage Eagles on Wednesday in order to salvage something from the tournament.

“We are as disappointed with the result as our fans, but that is football. We really and truly appreciate the support of the Federal Government and also the NFF.

“We are determined to go into Wednesday’s game with renewed commitment and hunger so that we do not leave this competition empty –handed.”

Nigeria and Tunisia will make it a date for the third place match on Wednesday at the Al Salam Stadium, one of the venues in Cairo. The match starts at 9pm Egypt time (8pm Nigeria time).