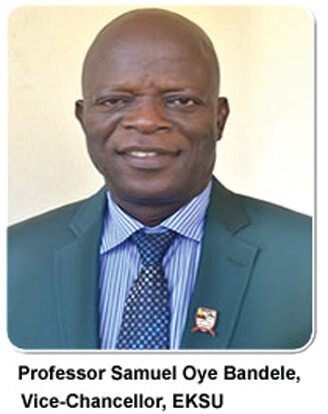 You must have seen that letter  purportedly issued by the office of the Registrar to Ekiti State University,  Ado-Ekiti (pointedly tagged EKSU). The letter has since gone viral on social media. My first reaction was to wear my cynic’s reading glasses… you never want to believe anything you read on social media, you’ll end up with mud in your face, and your reputation in tatters.

To refresh your memory bank, a letterhead, with logo and details of EKSU, went out as a picture. It was addressed to one Bamisaye, Tosin Tope, and read verbatim thus: “Dear Bamisaye, Award/Distinction – This is to inform you that you have won ADO-EKITI PATRIOTIC FRONT PRIZE AWARD for 2016/2017 academic session, as the best graduating student in the Department of Civil Engineering.”

That is all well and good. The next line is the ignition that caused it to ‘go viral’ on the wings of shock, disgust and more less colourful sentiments. Here it is: “The value of the prize award is N100.00”… And just in case you think it was some typographical error, the next line wipes that off. It beams: “…(One Hundred Naira Only).”

It was confidently signed on behalf of the Registrar by Dr. S. O. Afolabi, Principal Assistant Registrar/Head, Senate and Academic Matters Division. The good doctor laden with lorryload of duties did not forget to extend his Vice-Chancellor’s congratulations!

In the year 2019 AD, it is quite possible to believe that the letter could be “fake news” – nothing is sacred to online agitators and content creators. So, I disregarded the letter as “one of those things”. That was last weekend.  Few days later, my shock was restored – the EKSU letter was true – not fake news! BusinessDay of Tuesday, July 9 reported its fact-checking details on the viral letter dated June 13, 2018. The newspaper contacted the Registrar, Mr. Akin Arogundade, who apparently didn’t flinch in virtually corroborating the content of the letter: “That award was instituted in the university more than 30 years ago… I’m sure you know the value of N100 then”.

Seemingly bamboozled by the flood of criticisms, snide remarks and general outrage, the university subsequently issued a statement by its Head of Information and Corporate Affairs directorate, Mr. Bode Olofinmuagun, which BusinessDay also provided us: “At the time the award was made, it was a good money (sic) compared to the present economic reality… It is in realisation of this development that the Senate of the university has reviewed the value of the prizes in this category to a minimum of N50,000 for corporate bodies and N100,000 for university prizes.”

Of course, this upgrade takes effect after the fact of the ridiculous offer to Bamisaye and others in his position.  Interestingly, the proud recipient confirmed receiving the letter having recorded a GCPA of 4.35: “They gave me the letter,” he was reported confirming, “but I have not collected the money (N100)… I went to the Bursar’s office, but he was not in the office, since then, I did not go again.”

Few things trickle out of the defense of EKSU authorities, aftermath of the leakage of a congratulatory/prize letter which seems to demoralise, accentuate our disdain for, and disparagement of merit and excellence.

Ekiti State University started off in 1985 as Obafemi Awolowo University in the then Ondo State. It has suffered three more naming “ceremonies”, including its current status when Ekiti was carved out of old Ondo State in 1996.

This withering anomaly is not restricted to state institutions in Nigeria – a peep at the online portal of our oldest federal organ, the University of Ibadan, UI (copyrighted 2019) will reveal equally laughable and widespread inspirational poverty. There are annual prizes of N200 and such ridiculous book prizes staked at N50…(I kid you not)! Here’s a spectacular bit of anachronism still adorning the site; it’s a quote from the UI’s site on the Chancellor’s Prize for the (most well-behaved) Student Union President: “endowed by His Royal Highness, Omo N’Oba N’Edo Uku Akpolokpolo Erediauwa, Oba of Benin…”. The value of this prize is…wait for it: “the annual interest accruing from the deposit of N3,000.”

Deeper probe will likely unearth equally discouraging and traumatic revelations, which to borrow the words of ASUU to the Buhari government, our educational management manual is not only wicked but criminal (and knee-jecking).

So, the prizes were instituted in the 60’s, 70’s, 80’s, and therefore have remained stuck on your books in such callous “unreality”.

Why, you may wonder, is the “economic reality” of salaries of lecturers and administrators responding positively almost every other year to inflation and other exigencies?

Is it then not sheer wickedness and lack of affinity for the sustenance of meritocracy that Bamisaye’s N100 prize can barely transport him from the VC’s office to the school’s main gate, much less adding a snack, on the day he comes to pick the prize!?

This retardation of academic accomplishment and belittling of the genuine efforts of our youth is at the centre of our national malaise. Self- conceited and insensitive policy wonks who are forced to think beyond the confines of their immediate environment by the occasional exposure of their tomfooleries. The sort of weight we stack on the side of excellence, innovation, creativity and technological advancement, will reveal what sort of steps we are taking towards the belly of the millennium.

Isn’t it ironic that the Vice-Chancellor of the same EKSU, Prof. Samuel Oye Bandele, in his inaugural press briefing before the 21st convocation of June, 2016 said this about his school’s vision: “Transparent pursuit of a 21st century globally acclaimed university that will excel in academics, research culture and moral values…”. Sir, you need to first revamp your entire reward and value systems. And in pursuit of that transparency, it will be greatly appreciated if Bamisaye is invited forthwith to collect a fresh letter, and the upgraded cash prize. Thank you.

Perhaps, it will be of use these parting shots… In Times Higher Education World Reputation Rankings (a 2016 report by Ellie Bothwell), not a few people wondered at the surge of schools from two Asian giants (Japan and China) up the hill of 100 Most Prestigious Universities – almost touching the coat-tails of behemoths like Harvard, Cambridge, Stanford, Yale, Oxford, etc. The following quotes will suffice, revealing and yet indicting us on why we have remained rooted in the sedimentary obtuseness of educational management and technology. A pity.

“Joshua Mok Ka-Ho, vice-president and chair professor of comparative policy at Hong Kong’s Lingnan University, added that Asia’s performance reflects heavy higher education investments from many governments in the region as well as universities concentrating funding on strengthening their research capabilities and publishing in international journals.

““Such self-enhancing and advancing trends will continue, particularly when an increasing number of governments in Asia have recognised the importance of research, knowledge transfer, innovation and technology in transforming the economy and society,” he said.”