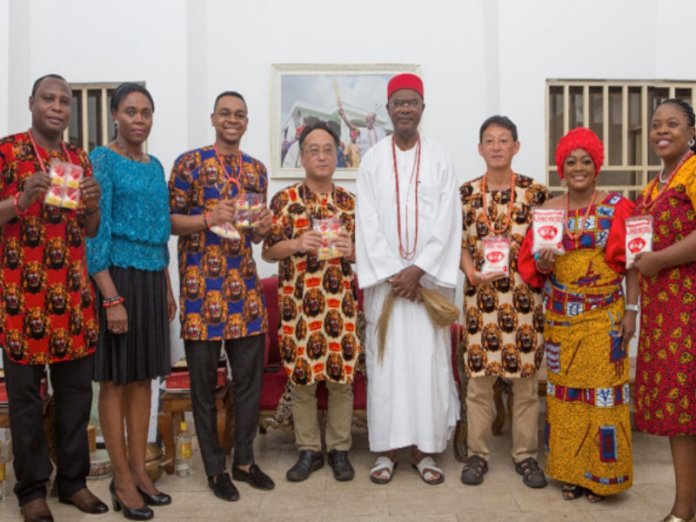 At least 130 medical professionals and food scientists have affirmed that Ajinomoto food seasoning, also known as Monosodium Glutamate, is healthy for consumption.

Stating this during Ajinomoto’s safety awareness campaign in the South-east geo political zone, the Managing Director, West Africa Seasoning Company (WASCO), Mr. Niki Junichi said the Umami food seasoning, which has been across the globe for over 100 years, is produced in Nigeria as part of plans to improve the nutritional status of the country.

The campaign began with a courtesy visit to the Obi of Onitsha, His Royal Majesty, Igwe Nnaemeka Alfred Achebe, at his residence in Onitsha, Anambra State, by top management of WASCO led by its managing director.

The visit, which had Ajinomoto ambassadors, popular comedienne, Helen Paul and Influencer chef / former Big Brother Naija contestant, Miyonse Amosu in attendance was part of the management’s ongoing effort to reposition the umami product in the country, particularly to dispel myths and misconceptions about the Japanese food seasoning through the support of opinion leaders, community influencers, nutritionists, food scientists and healthcare professionals.

Junichi said: “MSG is 100 per cent safe for consumption. We urge Nigerians to disregard unscientific rumours about the product. They are fake news. Umami is the fifth basic taste along with sweet, bitter, salty and sour, while glutamate is an amino acid found naturally in protein-containing foods such as meat, tomato, vegetables, poultry and human breast milk.

“The seasoning is made from natural sugarcane and therefore, safe for consumption. What some people are saying about Ajinomoto is complete fake news because there is no scientific evidence to their claim. For a long time, we have kept quiet about these rumours. But now, we have decided to address them.”

Speaking on the topic “MSG: A Safe Food Flavour Enhancer”, a lecturer at the Department of Human Nutrition and Dietetics, Michael Okpara University of Agriculture, Umudike, Dr Helen Henry-Unaeze said glutamate enhances flavor of natural food and also gives it a delicious taste.

She explained: “when you hear of umami, what comes to your mind is MSG, that is Ajinomoto MSG, which simply means sodium salt of glutamatic acid. It is an amino acid naturally in our body and present in all food, especially in protein rich foods.

“We have it in plant, animal, onion, tomato, carrot, locust bean, castor oil bean seed and Iru. When you ferment them, the glutamate in them rises and it’s actually the glutamate that impact the umami flavor that we are talking about. So, you can see it’s safe for human consumption.”

Dispelling rumours about the product, Henry-Unaeze reminded the participants that as far back as 1998, a research was carried out on MSG at the University of Nigeria, Nsukka, revealed that it was safe for human consumption.

The Dean, Faculty of Agriculture, Nnamdi Azikiwe University, Akwa, Prof. Ernest Igwe, said he was at the seminar to join the company in dispelling rumours about the MSG product.

Igwe, who has been teaching Food Safety and Toxicology at the Department of Food Science and Technology of the university for the past 27 years, said: “Let’s be frank to ourselves, no food or even water is 100 per cent safe.

“So, MSG is safe for human consumption no doubt. But it appears there is a campaign of calumny against the product. Since I was a kid that the rumour started, there has not been any substantiated and scientific fact to the allegations.”

Also, President, Association of Resident Doctors, Nnamdi Azikiwe University Teaching Hospital, Dr. Stanley Egbogu, said:” We have used Ajinomoto in the past and we are still using it in the present. Some patients mentioned that they took it and they had diarrhea. But the truth is that, most diarrhea diseases are infectious and not mainly from seasoning.”

Earlier in his response, Igwe Achebe, told the WASCO management not to be discouraged by the rumours in producing good products