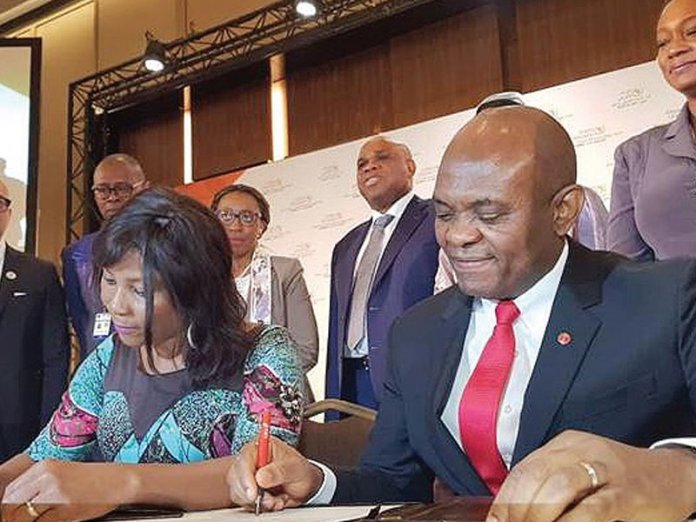 The new partnership between the United Nations Development Programme and the Tony Elumelu Foundation will put the continent on a sustainable growth path, writes Obinna Chima

Africa has always been described as a continent with untapped potential. The continent is notable for its rapidly expanding consumer markets as well as its huge youth population.

But despite all these, almost on daily basis, thousands of migrant Africans who are mostly youths, go through harrowing experience as they try to enter into Europe and other continents in search of greener pastures, in order to get out of what they view as the excruciating poverty and bleak future of the continent.

In addition, because of the challenges of setting up businesses and also to market their ideas, a lot of African youths are always discouraged.

Thus, in order to address this challenge and provide direction for the next generation of entrepreneurs in the continent, the United Nations Development Programme (UNDP), the global development network of the United Nations, recently went into a partnership with the Tony Elumelu Foundation (TEF), to train, mentor and financially support 100,000 young entrepreneurs in Africa over 10 years, towards achieving the Sustainable Development Goals (SDGs) and the African Union’s Agenda 2063.

The TEF-UNDP Sahel Youth Entrepreneurship Programme, which is expected to mobilise support for businesses, aims to generate millions of new jobs and contribute at least $10 billion in new annual revenues across Africa.

This was announced at the 12th Extraordinary Session of the Assembly of the African Union (AU), where the founder of the TEF, Mr. Tony Elumelu and the UNDP Regional Director for Africa, Ahunna Eziakonwa, joined African Presidents at the African Continental Free Trade Area (AfCFTA) Business Forum, where the agreement was signed.

Clearly, from Lagos to Nairobi, Accra to Lusaka and other major cities in the continent, with the innovations in the mobile payment space, e-commerce, technology, agriculture and other critical sectors of the continent, promoters of the TEF and UNDP partnership strongly believe that African youths, if given the required support can compete with their peers in the global market.
This is also expected to lift the continent out of poverty, a scourge that a lot of countries in the continent are still contending with.

“I am a bit concerned about the challenges that stare us in the face and we must do something now or it will be very challenging. The major thing is unemployment. It is a major challenge in Africa,” he had explained.
According to Elumelu, creating the enabling environment would allow SMEs to flourish.
“If we succeed in bridging access to finance to SMEs, they will do well and as they do well, there would be a direct correlation with creating wealth for Africa. So to us, the future is good, but we need to do something about unemployment,” he added.

The TEF, UNDP Partnership
The partnership will target young Africans in under-served communities, starting with the Sahel, given the region’s opportunity as the youngest population in the world with 194 million people under 25 years of age (64.5% of the total population).

Similarly, the programme builds on UNDP’s YouthConnekt initiative. The aim is to increase job creation through dynamic entrepreneurship and create sustainable economic growth that anchors the development of communities and states.

Commenting on the new initiative, the Assistant Secretary-General and UNDP Regional Director for Africa, Ms. Ahunna Eziakonwa said: “We see Sahel as a land of many opportunities and investing in the youth is a pre-condition to stabilising the region. The youth should be at the heart of any development agenda.
“We need to invest in their potential, talent, energy and enthusiasm and create the opportunity for them to fully realise their dreams.

“That is why UNDP is co-creating development solutions by investing in entrepreneurship models to promote inclusive growth.

“Partnership with the Sahelian youth entrepreneur is a catalyst for transformation and sustainable development. We call on other private sector entities to join the Tony Elumelu Foundation to support young entrepreneurs.”
On her part, the CEO of the TEF, Ifeyinwa Ugochukwu said: “Our partnership with UNDP is welcome and timely – it will directly assist entrepreneurial success in a number of fragile areas and is a testament to the validated approach to philanthropy we have pioneered.
“Africa needs partners that do not only believe in the potential of its private sector to champion economic development, but backs this with commitment. With this agreement, UNDP has proven to be a true partner to Africa’s entrepreneurs and has demonstrated its commitment to work with us to scale up the impact of this initiative and eliminate poverty on the continent.”
The TEF-UNDP programme is fully aligned with the one million by 2021 Initiative of the Chairperson of the African Union Commission, His Excellency Moussa Faki Mahamat.
Launched in April at the AU Headquarters in Addis Ababa, the 1 Million by 2021 Initiative aims to concretely reach 1 million African youth from across the continent with opportunities and interventions in the key areas of Education, Entrepreneurship, Employment and Engagement (4Es) to accelerate Africa’s socio-economic development.
The Chairperson of the AUC speaking at the launch of the 1 Million by 2021 initiative had said: “The1 Million by 2021 initiative is an African call to action that aims to ensure that no young persons aged 15-35 is left behind.
“The initiative adopts a Pan-African outlook and facilitates strategic partnerships to open up new opportunities for young people on the continent…The AU has the expertise, convening power and continental reach at our disposal but that alone cannot guarantee success.
“We need commitment from our public and private sector partners to achieve success. In the face of our overwhelming task, a collective effort is necessary to stand and succeed. In Africa, we say, ‘Broomsticks bound together are difficult to break. This is the approach that I implore us to take”.

Through the TEF-UNDP partnership, the selected applicants will each receive a maximum of $5,000 non-refundable seed capital, access to mentors, a 12-week business training and networking opportunities. They would join the previously announced 3,051 beneficiaries of the 2019 cohort of the TEF Entrepreneurship Programme.

The applications would be run on TEFConnect, the largest digital networking platform for African entrepreneurs and forms would be available in any of the branches of the United Bank for Africa (UBA).
Following the end of the application window, an initial longlist of 5,500 applicants will be selected to undergo the 12-week business training. After the training, the final shortlist of 2,000 applicants will be announced to join the previous 2019 TEF cohort.

Addressing Bottlenecks
President Muhammadu Buhari recently said his administration plan to lift 100 million Nigerians out of poverty in the next 10 years, focusing on entrepreneurship.
Elumelu, while reacting to the President’s statement, had expressed confidence that Buhari’s commitment to
lifting 100 million Nigerians out of poverty “is laudable and possible, though ambitious.”

He said, “I am sure we took note of President Buhari’s commitment to lifting 100 million Nigerians out of poverty. This is laudable, ambitious, but indeed very possible with the right resolve accompanied by concrete actions.”

To realise this commitment, Elumelu challenged the federal government “to abolish multiple taxes on small businesses; ease the operating environment for these employment generators by making business registration
easier; prioritise training and development and entrench the rule of law.”
He equally challenged the federal government “to create industrial, technology and agric zones for industries to thrive. We all also need peace and security.

“We, the private sector and those with means, should invest in our young ones in a manner that creates social and economic returns, which is the philosophy driving the TEF.”

The Chairman of UBA, also described technology as a leading accelerator for economic transformation and development globally. Owing to this, he stressed the need for policymakers and political leaders in Africa to leverage technology to transform the continent and empower the massive youth population in the continent.
He pointed out that from efficient payment systems, to access to data that fosters connection and collaboration, technology remains a reality and offers a world of opportunity and promise.
He emphasised that technology remains a great employer of labour, drives inclusiveness and helps in alleviating poverty.

“We need the world to pay attention to Africa so that young Africans are not disenfranchised and left behind in this new technology era.

“We need the world to pay attention to the plight of young Africans so that issues of migration can be addressed in a more fundamental way – by tackling the root cause, which is a lack of economic hope. “We must address these issues holistically to fight poverty which as we all know is a threat to everyone everywhere,” he added.