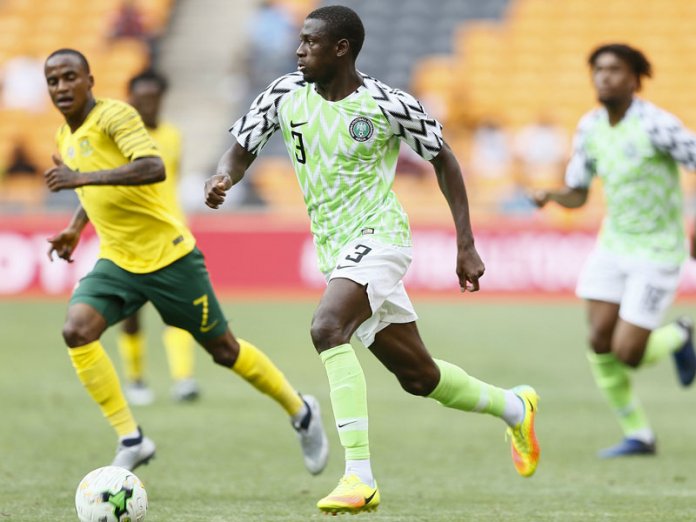 Super Eagles of Nigeria booked a place in the semi final of the 2019 Africa Cup of Nations on Wednesday night with a 2-1 defeat of South Africa’s Bafana Bafana at the Cairo International Stadium.

Villarreal’s exciting forward, Samuel Chukwueze put Nigeria in the lead in the 27th minute after collecting a perfect cross from Arsenal man, Alex Iwobi from the left flank of the South African goal area.

Chukwueze’s first attempt bounced off a Bafana defender before burying the rebound into the back of the net of Ronwell Williams in goal for South Africa.

The Super Eagles were deserved winners and should have been ahead by more goals when Williams pushed Oghenekaro Etebo’s free-kick onto the bar.

However, in the second half, South Africa equalised from a set piece that bounced off the back of Odion Ighalo for Bongani Zungu to level for Bafana with a header.

It took a Video Assistant Referee (VAR) check to confirm it was not an off side goal.

Substitute Moses Simon’s corner kick was tapped into Bafana net by central defender, William Troost Ekong to give Nigeria the winner in the 89th minute. All attempts by the South Africans to find an equaliser in the added four minutes failed to produce any result.

Nigeria is to play the winner of the quarter-final clash between Algeria and Cote d’Ivoire in the semi final.

Earlier in the first quarter final match between Senegal and Benin Republic, the Teranga Lions snatched the semi final ticket with a lone goal scored by Everton man, Idrisa Gueye.

Gueye started and finished a move which saw Liverpool’s Sadio Mane tee up his team-mate to score in Cairo.

The Video Assistant Referee introduced from the quarter-final stage yesterday had two goals scored by Mane disallowed for offside after VAR checks.

Benin’s Olivier Verdon was sent off near the end of the game for a foul on Gueye.

Before Gueye’s goal, his first in Egypt, Benin – who had reached this stage without winning a match in normal time – almost took the lead after a horrific mistake by keeper Alfred Gomis.