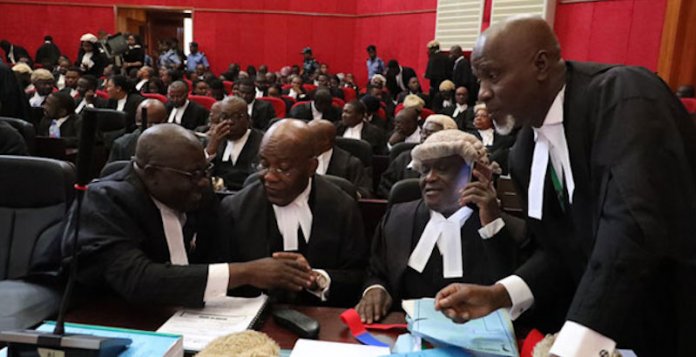 Some witnesses in the hearing of the petition filed by the Peoples Democratic Party (PDP) and its presidential candidate, Alhaji Atiku Abubakar, against the election of President Muhammadu Buhari yesterday told the panel hearing the complaint that results from the presidential poll were transmitted into a server belonging to the Independent National Electoral Commission (INEC).

Obi, who earlier adopted his witness statement on oath, which he deposed to on April 26, as his evidence-in-chief, said this while fielding questions from INEC’s lawyer, Yunus Usman (SAN), under cross-examination.

Fielding questions from Buhari’s lawyer, Chief Wole Olanipekun (SAN), he said he was not aware of the guidelines used by INEC for the presidential election, but there were specific guidelines booklet issued for his roles as a RATECH.

“I was a RATECH in charge of the use of card reader,” he said.
He said he was not aware of Olanipekun’s claim that there was no designation in the INEC’s guidelines as Registration Area Technician.

Fielding questions from APC’s lawyer, Lateef Fagbemi (SAN), Obi said the lawyer was not correct to say that it was the duty of the presiding officer “to do accreditation, verification authentication, and collation at the polling units.”
The witness said: “You are not entirely correct sir, because we were told at the training that the Assistant Polling Officer 1, was in charge of accreditation.”

Fielding more questions, he said, “I did not serve as APO1 and I did not serve as the presiding officer.”
He said he did not act on his own, contrary to Fagbemi’s suggestion.
“I have a letter to show that I was shortlisted.”

In his own testimony, a presiding officer during the February 23 presidential election, Mr. Adejuyitan Olalekan, admitted transmitting election results to INEC server, saying that the INEC server is automatic and is embedded in the smart card reader.
“I personally transmitted election results to INEC server through the code provided by INEC,” he said, adding: ‘’There was no instruction from INEC to us to allow election manually in case the card reader refuses to function.”

Olalekan, however, said the card reader in his area worked perfectly and he transmitted results to it.
Reacting to a question, the witness said the INEC server was connected to the card reader.
Under cross-examination by Fagbemi, the witness admitted not serving as presiding officer for INEC but only was shortlisted by the electoral body.

He could not answer the question posed to him on whether as an Assistant Presiding Officer (1) he was authorised to conduct elections and transmit results personally to server.
He, however, said the INEC guidelines did not show him anything to that effect.

Also, he was unable to give the code number and the server from which the results were transmitted to.
Away from the server issue, the fifth petitioners’ witness, one Mohammed Tata, in his own evidence alleged that elections were not conducted in his polling unit.

Tata, an agent of the PDP in the February 23 presidential election, said he was pained and unhappy with what he described as a great injustice to the people and country as a whole.
He said he was deployed to cover elections in a polling unit within Jigawa State, saying no election took place in his unit, but a concocted result announced by INEC.

“I am a true Moslem, I believe in destiny, I am not bothered with who wins the poll, whether APC or PDP; all I want in my country is justice. I am not happy with what happened. There was no election in my area”, he added.
Similarly, the sixth witness, Mr. Mustapha Bello, also a PDP agent in Jigawa State, alleged voter intimidation and harassment amongst others.

However, under cross-examination, he confirmed that he voted during the poll.
Earlier, the first witness to be called by the petitioners, Alhaji Buba Galadima, adopted his statement on oath in the petition.
Galadima said he supported Atiku in the 2019 election because he was a better candidate, who is educated, God-fearing and capable of providing good governance in the country.

He denied parting ways with Buhari because he was not favoured by the administration.
According to him, he withdrew his support from Buhari because the president failed to protect life and property of citizens and did not allow the rule of law to prevail.

Under cross-examination by Fagbemi, Galadima told the tribunal that he was not a member of the PDP and that his party – Reformed All Progressives Congress (RAPC), had a memorandum of understanding with Atiku and PDP on how to make life bearable for Nigerians, ensure security of lives and property and allow the rule of law to prevail.

Apart from the witnesses called by the petitioners at yesterday’s proceedings, more documents numbering 6,806 mainly election result sheets from Kano and Zamfara States, were tendered and admitted as exhibits by the tribunal.
The respondents equally indicated their objection to their admissibility.

Among the documents objected to by Olanipekun is the president’s form CF001 submitted to INEC for the purpose of contesting the presidential election.
The form CF001 contains personal and educational qualification of Buhari as supplied.
The documents form part of evidence the petitioners seek to prove that Buhari did not possess requisite academic qualification for the last presidential election

However, when the lead counsel to the petitioners, Dr. Levy Uzoukwu (SAN), sought to tender them before the tribunal, the respondents indicated their objections.
However, the respondents did not object to the tendering of the final result of the election signed by Professor Mahmood Yakubu, which the tribunal admitted as exhibit.

Also tendered and admitted as exhibit are documents containing total number of voters in the INEC register and the number of collected Permanent Voters Card (PVC) for the elections.
The petitioners in addition tendered six newspapers publications and 10 press statements issued by INEC in respect of the election.

Meanwhile, hearing in the petition continues today with the petitioners calling more witnesses from the 400 lined up to prove their case against the outcome of the presidential election.
Present at yesterday’s hearing were the National Chairman of the APC, Mr. Adams Oshiomhole; the National Publicity Secretary of the PDP, Mr. Kola Ologbondiyan, and other party chieftains from both sides.