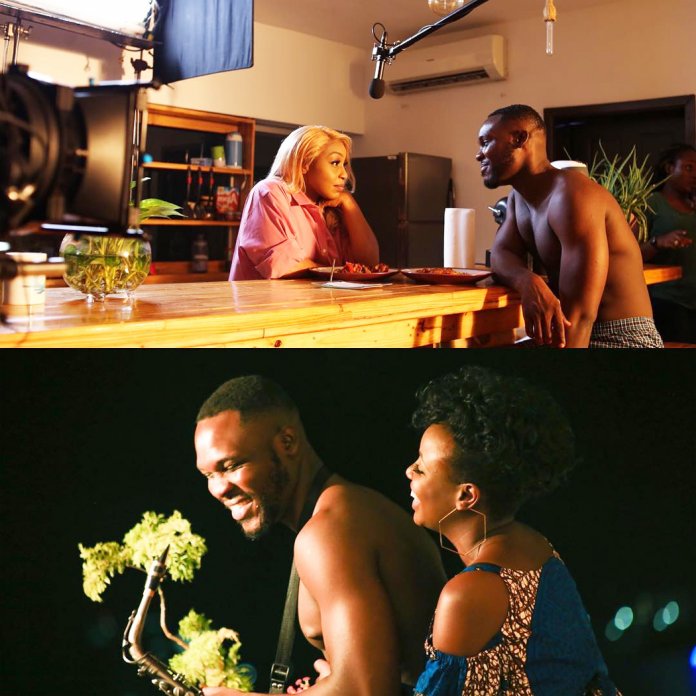 Upcoming psychological thriller, ‘La Femme Anjola’ written by Tunde Babalola and directed by Mildred Okwo, has the classic elements of film noir but with an African twist, writes

“Are you sleeping with her,” a female character asks her male partner who responds “with whom. . .” This opening scene of a teaser  recently released for the movie ‘La Femme Anjola’, takes you a little further to another line. “Are you having sex with Anjola…?” The male  character responds “No, she is my boss’s wife.” The teaser features the words ‘a tale of love, sex, greed, and the Nigerian dream.

La Femme Anjola tells the story of a young and successful stockbroker. His life is turned upside down when he falls in love with a beautiful woman who turns out to be a femme fatale that’s working with her crook husband to take him down. Take from behind the scenes of the upcoming psychological thriller the expression thus: “La femme Anjola…one kiss transports you to heavenly heights, as you relish the sweetness, you suddenly realise you’ve been stung by a black widow……..thus begins your delirious descent to your death.”

The movie, which has been in the making since sometime around 2015, features a star-studded cast that includes Joke Silva, Rita Dominic and Nonso Bassey. Dominic plays the film’s female lead character alongside Chukwunonso Bassey, who plays the male lead character. Also on the set of the new movie project are Femi Jacobs, Adejumoke Aderounmu (Jenifa’s Diary), Big Brother Naija ex-housemate, Bassey Ekpeyong, and Uzor Osimkpa.

La Femme Anjola also stars Ken Erics, and star of Biodun Stephen’s JOBA movie, Blossom Chukwujekwu. Written by Tunde Babalola, ‘La Femme Anjola’ is directed by Mildred Okwo and has The Audrey Silva Company as the production company. Okwo has been working on the new film project since 2015 when she began shopping for cast and crew to work with.

In a chat with this reporter, she said “We bought the script from Tunde Babalola around that time.

Since then, we have been working on developing and rewriting it further with Tunde to get the very best. We also had to work on raising the proper funding required to shoot a story of this caliber.

It has not been easy but we finally got the right funding and here we are.”

Words about when the film will be officially released is sketchy, however, Okwo revealed that that the crew was about to shoot a few scenes in Cape Town after which post production will commence, “That’s when I will be able to tell you release dates.”

As regards what makes the script different from the average Nollywood scripts, the theme and the title, the movie has the classic elements of film noir but with an African twist. “It has something to do with the story line but if research the birth of the film noir genre, it originated with French filmmakers, so it’s only befitting. The Audience that would like a heart pumping thrill will love this film. The audience will be the ones to determine that. I am making a film as I usually do… putting in a lot of hard work and paying attention to detail,” Okwo added. “

This production she says is several notch higher than her other films and she’s excited about it. “La Femme Anjola has everything in it from car crash scenes to fight scenes, to people crashing from three story buildings. Plus the actors delivered big time.”

Okwo and her business partner, Rita Dominic, are the duo behind The Audrey Silva Company (TASC) which has made a number of award-winning productions.

Dominic had previously worked with Mildred Okwo in the 2012 comedy feature ‘The Meeting’. The movie went on to grab many award nominations.