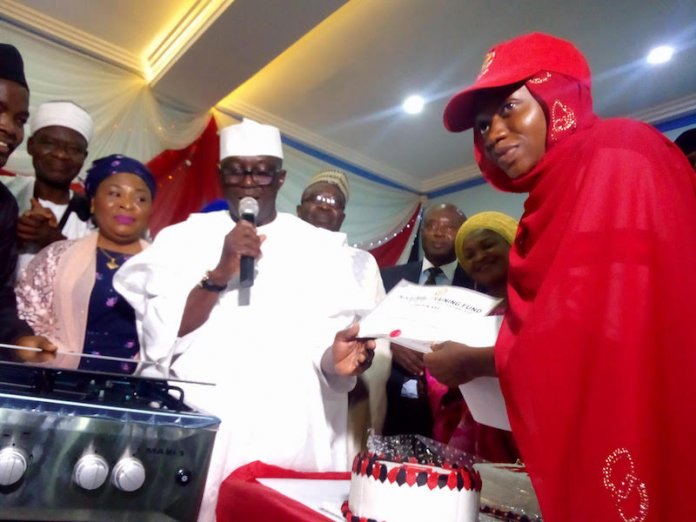 Within the last two years, the Industrial Training Fund (ITF), through the National Industrial Skills Development Programme (NISDP) and other skills acquisition programmes, equipped about 450,000 Nigerian youths nationwide, and about 2,000 youths from Nasarawa State with skills for employability and entrepreneurship.

In this regard, shortly before the 2019 general election, the ITF trained about 11,000 Nigerians in various trade areas namely: welding and fabrication, plumbing and pipe-fitting, tailoring, aluminum, tiling, Plaster of Paris (PoP), as well as photography. consequently, about 300 indigenes of Nasarawa State also benefited and were trained in various trades that were carefully selected based on their potentials to directly impact on the economy of the state and the country in general.

Perhaps, the ITF’s monitoring and evaluation of its earlier graduate trainees indicated that where training occurs without the accompanying empowerment tools, the results become less impactful. Hence bearing this in mind, the ITFdecided to empower beneficiaries of its skills acquisition programmes with start-up-kits; which the 300 indigenous graduate trainees of the NISDP from Nasrawa State were similarly empowered recently in Lafia, the state capital.

Consequently, the ITF organised a closing ceremony of its National Industrial Skills Development Programmes on June 20, 2019 in Lafia, to present the start-up-kits to the 300 graduate trainees from Nasarawa State.

In a welcome address at the presentation ceremony, the Director General/Chief Executive of the ITF, Sir Joseph Ari, said the NISDP was one of the numerous skills acquisition intervention Programmes introduced and Implemented by the ITF, to facilitate the achievements of the President Muhammadu Buhari administration’s policy on job and wealth creation.

The ITF boss, who was represented at the closing ceremony by a Deputy Director of the fund, Ayo John Kayode, said: “It is our conviction that training the youths and women without equipping them, defeats the core objective of the Programme of the present administration to create wealth and grow the economy.”

“Owing to our desire to fill the skills gaps identified by the ITF/UNIDO survey, our target this year is to vigorously work to equip Nigerians with lifelong skills in the agriculture, construction, transport and services sector that were identify by the survey to have great potential for job creation,” Ari noted.

Perhaps, the ITF’s initiative to equip about 300 of its graduate Trainees in Nasarawa State as one of the NISDP beneficiaries received commendation from the governor of the state, Engr. Abdullahi Sule. The governor described the ITF’s gesture as a worthwhile programme aimed at empowering both women and youths which was in line with the policy trust of President Muhammadu Buhari.

Governor Sule, who spoke at the occasion through the Secretary to the State Government, Aliyu Ahmed Tijjani, said: “I am happy to say that this initiative of the ITF is in tandem with our administration’s trust that is anchored on wealth creation, employment generation and poverty alleviation through skills acquisition and youths employment.”

“It is for this reason that this administration has made it fit to synergise with appropriate institutions in order to create jobs through capacity building and skills acquisition programmes for the gainful employment of our teeming youths and women in the state.”

The Nasarawa State governor continued by reiterating that his administration places high premiums on skills acquisition, entrepreneurship training and development as well as provision of technical backup and consultancy.

Giving the growing number of youths with enormous potential in the society yet not gainfully employed, Governor Sule said: “Let me call on the beneficiaries of this programme to make judicious use of this opportunity to achieve self-reliance for the benefit of the society. Therefore, I charge you not to sell this kits; as doing so will defeat the objective of the programme.”

The ministry of special education, science and technology that is saddled with the responsibility that all the youths are giving the skills that were required to make them self-reliant had a delegation led by the permanent secretary, Dr. Janet Angbazu, to the ITF’s presentation of start-up-kits to its 300 graduate trainee in Nasarawa State.

The ministry which also encourage individuals to develop their own talent by teaching new skills to improve on those acquired to emphasise innovation and creativity, has been involved in doing what the ITF was doing through the state government owned Relevant Technology Institutions, said the permanent secretary of the ministry.

She added: “We have been training over 100 skills acquisition in the state and about 1,000 have benefited from this, whereas 2,000 are awaiting graduation.”

Dr. Janet, having seen the enormity in the provision of skills acquisition to women and youths in the society, said that the state government could not do that alone hence government appreciates ITF for partnering with Nasarawa State government to ensure that those gaps are bridged because the state has many youths that have no job.

“There are graduates that have nothing doing. They are wandering the streets and have become a burden to the parents and the society. But Governor Sule is prepared that our youths are empowered, and this is the beginning of it,” she stated.

The happiness of the people over ITF’s intervention to empower youths of the state to become self-reliant knew no bounds as it was expressed by the immediate past commissoner for housing and urban planning, Sa’adatu Yahaya.

She said that Nasarawa State was happy that ITFwas partnering the state because the governor of the state is a technician. According to the erstwhile commissoner, “when Governor Sule came on board, he pledged that he was going to support technical persons.

“He promised to revamp the Assakio Technical College in order to also contribute in training the youths on skills acquisition so that we can reduce youth restiveness in the state. So what ITF is doing is really helping the government to reduce youth restivenesse and idleness by enabling youths to acquire skills and meet the needs of our economy”, Sa’adatu concluded.

To a director in the Nasarawa State ministry of industries and investment, Abubakar Mohammed Akau, the ministry has been giving its own moral support as well as ensuring value addition in all of ITF’s activities taken place in the state.

The director continued: “One of such supports that we have made to ITF is presentations at the state executive council meetings of the activities of ITF as well as other entrepreneurial skills acquisition that we have been offering in the state. Ours is to see value addition. Once the value is added, the product will be marketed in a very conducive market environment.”

Akau assured ITF that the industries and investment ministry of the state has provided all the markets for all of its products. “We have also ensured that all the resources that government is putting across to you is being valued by people of the state.”

“I want to call on both the government and individuals that the only way we can promote these graduates is to patronise them. Once we do that, there will be sustainability. If we don’t sustain them, this project cannot be sustained and we may not be encouraged to come up with another group of participants as we can see today,” he maintained.

To the beneficiaries, it was all assurances to their benefactor, the ITF, of their readiness to make judicious use of the tools donated to them by applying the skills they have acquired on the tools to help grow the state and the nation’s economy.

In her submissions, Hasfat Ahmed said they were lucky to have been selected to participate in the programme, even though she said the training was not easy passing. “A three months intensive programme, but with commitment and passion, we have carried out what we are celebrating today”, she said.

On his part, Usman Yahaya promised to take very good care of the opportunity to support himself. “I will not sell my start-up-kits but will use it to practice what I have been taught so that I will bring food to the table,” he pledged.