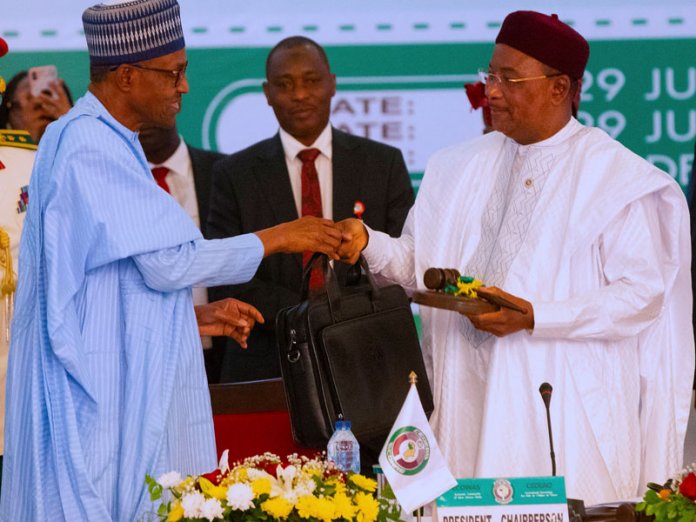 ECOWAS Heads of States and Governments have elected President Issoufou Mahamadou of Niger as the chair of ECOWAS for a one-year term.

Mahamadou was elected at the 55th Ordinary Session of the ECOWAS leaders Saturday in Abuja, taking over from President Muhammadu Buhari.

A communiqué read by Mustapha Suleiman, permanent secretary of the Federal Ministry of Foreign Affairs, said that the leaders lauded Buhari for his commitment to regional integration.

ECOWAS, also, agreed to hold its next ordinary session on Dec. 21 in Abuja. The presidents of 13 of the 15 heads of state were in attendance for the session.

The session was also attended by the president of ECOWAS Commission Jean-Claude Brou and Mohamed Ibn Chambas, Special Representative of the United Nations Secretary-General for West Africa and the Sahel.

Others in attendance were president of the International Criminal Court, Justice Chile Eboe-Osuji and Mr Abdallah, president of the Commission of the West African Economic and Monetary Union.

In his address yesterday, Buhari lamented that both terrorism and banditry were undermining the collective efforts in achieving full regional integration within the west Africa sub region.

Buhari thus called for collaborative effort to end terrorism and banditry in the sub region, stressing the need to remain focused in collective effort to make the sub-region an area of peace and security.

Buhari said, “It is, therefore, necessary that we act collectively to end this menace in the interest of regional stability and wellbeing of our people. This is an essential prerequisite if we are to attain the primary objective of our organisation.

“ECOWAS has a mission to ‘promote cooperation and integration, leading to the establishment of an economic and monetary union in West Africa, in order to raise the living standards of its people and contribute to the progress and development of the African continent’.

“We are all witnesses to the recurring incidents of inter-communal clashes, herders-farmers conflicts, banditry and terrorist attacks in all our countries,”

“Taking into account the transnational nature of the threats confronting us, the need for the adoption of a common strategy at the national and regional level to combat them, has become imperative. By so doing, we will reinforce our actions and resources for a more effective response to protect our citizens and secure our common space.

“This unrest also undermines all our efforts in achieving full regional integration. It is, therefore, necessary that we act collectively to end this menace in the interest of regional stability and wellbeing of our people,” the president added.

Earlier, Chambas said beyond military approaches, more efforts should be made in addressing the root causes of violent extremism, terrorism and other conflict in the sub region.