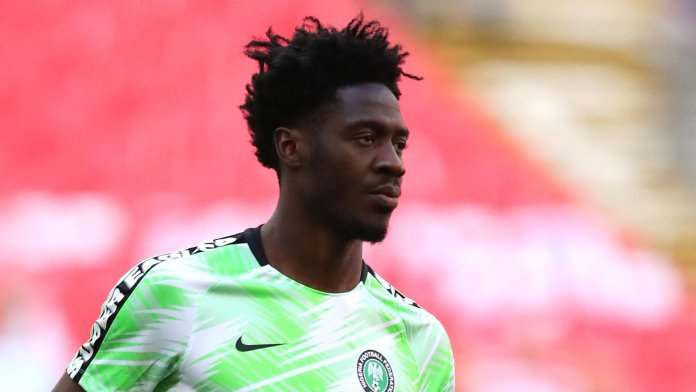 Former England youth international Ola Aina says he is proud to represent Nigeria at the 2019 Africa Cup of Nations after the heartbreak of missing the last World Cup.

London-born Aina, who has Nigerian parents, played for England up to under-20 level before declaring his allegiance to Nigeria in June 2017.

The 22-year-old earned rave reviews after producing a delightful back-heeled pass as the Super Eagles edged past tournament debutants Burundi in the opening game.

Playing in this tournament is ticking something off the international list, I really love playing with this team, it’s a huge family with amazing spirit

“It hasn’t been an easy journey after missing out on the World Cup, but I keep working hard and now feel extremely proud to play for Nigeria,” Aina told BBC Sport.

“Obviously, my family is proud and happy for me. It’s not easy to bounce back from tough times but I took a positive outlook at life last summer.

“That transition (switching from England) has to happen, you make decisions in life and live with it.

“Playing in this tournament is ticking something off the international list, I really love playing with this team, it’s a huge family with amazing spirit.”

Aina, who started his career at Chelsea and made six senior appearances, played on loan at Hull City before another stint at Italian club Torino.

He played 30 matches in Serie A for the Turin outfit and provided one goal and three assists during that spell, before signing on a permanent deal with Torino early this month.

As he follows in the footsteps of former England youth internationals like Sone Aluko, Shola Ameobi, Victor Moses and Alex Iwobi who all opted for Nigeria, Aina hopes to inspire others.

“You have to give it to others who took same path, they blazed a trail and made others like me think as well,” he added.

“The biggest thing about this decision is once you come into the circle you feel the togetherness, the passion and family atmosphere. Positive vibes in the dressing room and great banter.

“I hope others will come along. It’s a personal decision and it’s paid off so far. We take it step by step, supporting each other and it’s showing on the pitch.

“I don’t want to look too far ahead, but if we stay this way anything is possible here in Egypt.”

Aina, who has 10 caps for the three-time winners and 2013 champions, starred again as Nigeria became the first team to qualify for the last 16 of the continental showpiece.

The Super Eagles face Madagascar in their last group match on Sunday in the city of Alexandria.