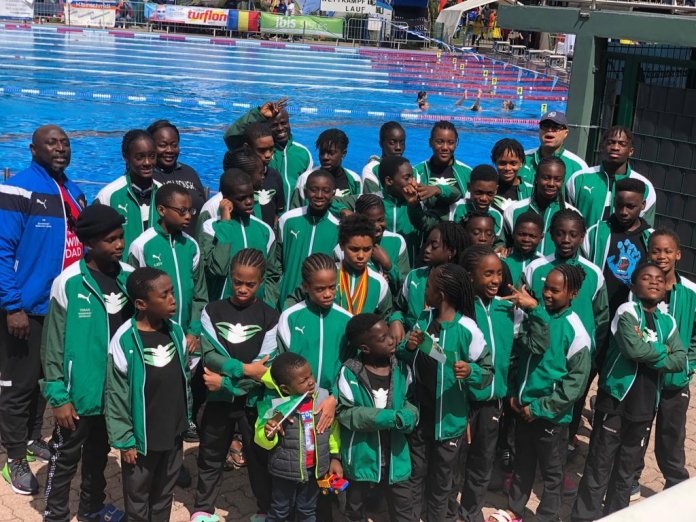 It was another feather to the wings of the Ikoyi Club 1938 Swimming section after emerging winner of this year’s Neptun-Nehein Swimfest in Arnsberg Germany.

The young swimmers from the club, most of which emerged from this year’s Zenith Bank/Ikoyi Club 1938 Inter-school Swimming Gala, amassed 42 gold, 48 silver and 27 bronze medals to beat other swimmers from 11 countries to the number one position.

Group Managing Director of Zenith Bank, Ebenezer Onyeagwu, said it was great to see how the investment of the organisation has worked wonders.

“We are proud of the swimmers and we believe very soon, they will also be representing Nigeria at global events,” the Zenith Bank boss said.

The Chairman of the swimming section of the club, Oloyede Obatoyinbo, expressed his satisfaction with the performance of the swimmers while also saying that they need to work more as they can do better than what they have done.

While also applauding the sponsor of the club’s swimming competition, Zenith Bank, for investing so much in developing the young minds, he called on others to emulate them and invest in different sports within the club.

“I am happy we came first again but I know we can do better,” he said.

“Some of the events we won silver and bronze, it would have been gold, but for me it was a good outing generally and I want to applaud all the swimmers for their performance.

“It is a joy for them winning the title and for us as a club and we will continue to do our best to expose all these young talents to more championships especially against top swimmers from around the world.

“We are looking forward to having some of them winning medals at the Commonwealth Games, the Olympic Games and also World Championships.

“I really want to praise Zenith Bank for their support and hope others can come out and do same thing, not only for swimming, but for other sports too,” concludes Obatoyinbo.