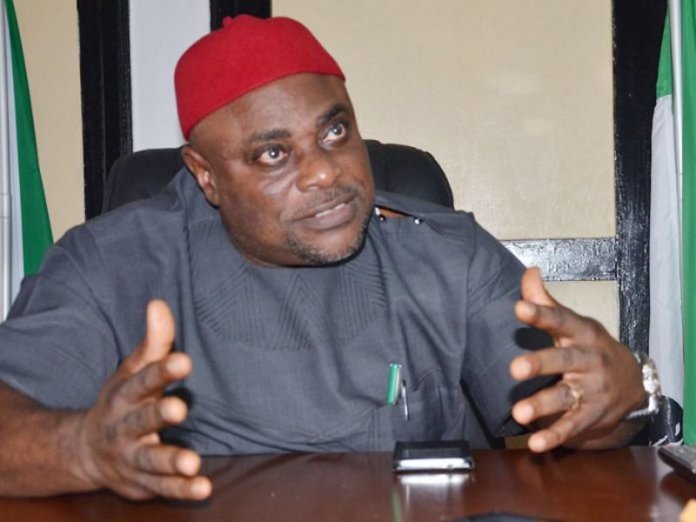 The National Chairman of the All Progressives Grand Alliance, Chief Victor Oye says the Southeast would not give up on the quest for presidency in 2023. But to realise this, he said would not be based on the survival of the fittest but on appeal for equity and moral justice. In this interview with Onyebuchi Ezigbo, Oye, also spoke on the challenges before President Muhammadu Buhari and how APGA would fare in 2023. Excerpts:

Despite fears of possible turbulence during APGA’s national convention, the event, which held at Awka, Anambra State, went peaceful and you were reelected national chairman for another four years. How did this happen?

For me, the victory is victory for all APGA members and supporters. It was a convention that was well planned and executed. We had enough time to plan, because the convention holds every four years, so, we knew it was coming and we put our acts together, gave INEC 21 days notice as demanded by our constitution and the electoral act, we held our NEC meeting to approve the guideline of the election and the agenda as well.

So, after all that, we held our convention. Delegates from all over the country – over 1,700 delegates were present and we were able to accommodate all of them in Awka and the convention went smoothly, monitored by INEC, led by a commissioner, Professor Antonia Sinbena with two Directors and two administrative officers. It was a very big, beautiful and peaceful outing.

One of the high points of that convention was the defection of the scion of the late Ikemba, Chief Emeka Ojukwu (Jnr) from APC to APGA and his subsequent appointment into the board of trustees of the party. How is this going to impact on APGA?
Naturally, the Ojukwus are part and parcel of APGA and as far as we are concerned, Chukwuemeka Ojukwu Jnr. is the scion of the Ojukwu dynasty and everything about the Ojukwu family revolves around him, because he is the first son of the Ikemba.
When he left for APC, we saw that as an adventure and we knew it wasn’t going to last. So, we are very happy that he has rejoined the fold and we are all working together towards making APGA truly the third largest political party in Nigeria and we are awaiting the new position we are going to assume in 2023.

You once promised to make APGA a national party. A lot of people still believe that APGA has not achieved that task. How can you assess your performance?
Is that your personal opinion or Nigerians?

I said some Nigerians.
How many Nigerians? Two can be some. Why I am saying that is because APGA is truly a national party. We have won elections in all parts of the country. We have three House of Representatives members from Benue State, one from Taraba, five councillors from Niger State and chairmanship of Gwagalada. So, this is no longer a local party or a regional party, it is now truly a national party in all ramifications.

APGA is growing and we are guided by some degree of morality in the things we do and many of us who work in APGA have the fear of God in the way we administer the party and APGA is now the party to beat, globally. We are now a global party not a local party, not just a Nigerian party. It is a global brand, because we have offices in 35 countries beside Nigeria and if our plans pull through, I think PDP and APC will have a very rough time in 2023.

This is because most Nigerians now see APGA as the viable alternative to the shenanigans of PDP and APC and you do know yourself as a renowned journalist that APC and PDP have nothing to offer this country. They are just grandstanding. For us in APGA, we have a shared vision to make Nigeria a truly progressive nation. It is only APGA that can do it, no other party.

You talked about 2023. Every part of the country has had a shot at the presidency except the zone you come from, the South-east. As the chairman of APGA, what is your view about 2023 politics? What will APGA do? Will the South-east get the ticket from APGA?
Let me give you some background. You said the South-east has never produced a president, which is true and 2023 is in the realm of posterity, nobody knows what is going to happen. As for me, I am a very pragmatic and realistic person. For the presidency, when we get to 2023 God will show us the way. It is not a decision that I can take alone, it has to be the party, so the party will decide which way to go.

But for me as an individual I believe justice should be done. It is not necessarily where the person comes from, we need a competent person to hold that office in 2023, because if you look at what is happening globally, you will see that Nigeria is not making progress, so we need to look inward. I believe between now and 2023, Buhari would have delivered his magic, which every Nigerian is waiting for.

After that, the presidency should now move to a more experienced, intellectual person to run the administration of this country. Nigeria is a heterogeneous nation and it requires someone with tactical diplomacy with the education and exposure to run the affairs of this country. That is what we need in 2023. Let see how things are going to turn out in the next four years.

The president has just been re-elected and we have the confidence that he will perform better in his second coming. The first thing the president is expected to do right now is to ensure that his cabinet is made up of men and women from all parts of Nigeria. Inclusive! I heard that he is going to appoint one minister from each state and one zonal minister from the six political zones, which will bring the number to about 43 ministers.

If he does that, it will be the first step to equity and justice. Second, he should look at the composition of the Security Council. Every part of every geo-political group in this country must be a part of that council so that when decisions are taken, those decisions will represent our national spread. It’s very important!

I have confidence in the ability of the president to do the needful between now and 2023 to reverse the course of history, because the way things have gone so far, Nigerians are not happy but I believe the first term of the president was a learning process and a period to lay the foundation of what he is going to do in 2019 to 2023. So, let us give him the benefit of doubt and see what is going to happen as we move on.

Before the 2019 election, Imo was one of the states regarded as ‘for the take for APGA’, but as it turned out, it didn’t work out that way. What really went wrong in Imo?

Nothing went wrong. Imo election is not yet over. After all, the man sitting there didn’t win the election. He didn’t get the mandatory two third in 20 local governments. He had only 12 local government areas and what is the percentage?
For me APGA will still win Imo State anytime any election is called and most of the people that came to contest for governorship ticket under APGA in Imo were just moles.

They didn’t mean business. Many of them have run back to PDP from where they came. One of them has even taken up appointment as Secretary to Government of Imo State – someone aspiring to be governor of Imo State under APGA. So, most of them were Wolves in sheep’s clothing. Only a few of them were real.

In the same Imo State, there was a convention that elected parallel executives the same day your convention in Awka took place and this same set of people had accused you of mismanaging the funds of the party. Is that true?

For me there is no parallel exco to what we have in APGA today. There is no faction. eEvery faction exists in the minds of those that conjured it. It isn’t part of what we are doing. We have only one Exco, one NWC, and one BoT. We don’t have any parallel Esco anywhere because the people you are talking about, did you look at the picture? They looked like people coming back from the far; they just gathered them from somewhere and took pictures.

And from the report of the chairman, you will see that there was no other convention other than the one held in Awka. So, anyone talking about faction in APGA is just being economical with the truth. We don’t have any faction. It is a common thing with every political party once you have any convention, elections or primaries, people will always try to be funny but they have never gone far with all their operations.

Like this one you are talking about, have you ever heard anything from them again? They don’t exist. They don’t have the moral, legal or constitutional powers to do anything, so, they will just burn out within one or two weeks and they are gone and gone forever. So, that is the least problem we have.

In APGA, we don’t do any cash business. Any money that comes into the party goes into the party’s account, so, there is transparency and accountability in APGA. We are working towards building a standard Secretariat in Abuja, the first party that would be able to achieve this.

PDP is unable to achieve this. They are building an empire in the sky. When will they complete it? APC hasn’t even started, so, we are going to build a standard national office in Abuja, which will be the envy of everyone. So, misappropriation is alien to APGA and the present administration.