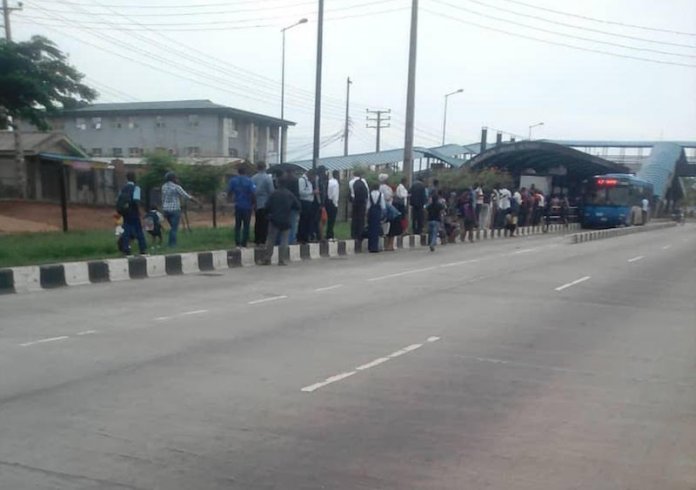 Chiamaka Ozulumba writes that one of the areas the new Lagos State Government should look at is the inadequate number of Bus Rapid Transit in the Lagos, which explains the long queues at each terminal, especially during rush hours

On a typical Monday, the Bus Rapid Transit (BRT) terminal at Ikorodu Roundabout usually witnesses an influx of passengers. Scratch that! Every day of the week, the scenario plays out the same way. To board the bus however, the passengers have to form a queue that sometimes extends even longer than the terminals.

On a recent Monday, commuters were as usual stranded for hours during the morning rushhour due to unavailability of the Bus Rapid Transit (BRT) vehicles, with long queues of passengers observed at designated BRT bus stands/terminals.

Passengers who spoke to THISDAY, lamented the insensitivity on the part of the management of the Bus Rapid Transit scheme, especially on Mondays which usually witnesses high turnout of people eager to get to their work place and business destination.

Speaking to THISDAY anonymity, one of the commuters at Haruna terminal, said because he works in a company on Lagos Island, he had to rent an apartment there while his family stays in Ikorodu. According to him, because of the long commute, he stays in his Ikoyi apartment during the week and then goes to join his family over the weekend in Ikorodu before heading back to the Island every Monday morning.

That fateful morning however, even though he left home early for the BRT terminal, luck wasn’t on his side as he was on the queue for well over two hours waiting for a bus to pull up.

He said most of his colleagues that work on the Island also do the same thing as they don’t like the idea of being stuck in traffic in the mornings and evenings as well, hence some of them make contributions towards renting an apartment together as flatmates or renting a self- contained apartment as the case maybe, all in a bid to avoid the ever present Lagos gridlock on major roads.

For majority of them who make their way home on Friday evenings to relax from the bustle of work life but are stuck in traffic, the emergence of the BRT scheme was a welcome idea at its incision but of the inadequate buses on ground.

But since, it has become evident that there is still a lacuna given the number of queues witnessed at each BRT terminal. Checks revealed that the same traffic scenario was evident at most BRT stands/terminals from Garage, Aruna, Agric, Itowolo, Majidun, Mile12, Ketu, Ojota, New Garage, Obanikoro, Maryland, Idi-Oroko, Palmgrove, Fadeyi routes, all along the arterial Ikorodu corridor which THISDAY plied on a that certain Monday to observe the intra-city transport situation in the Lagos metropolis.

Commuters who spoke to THISDAY, decried this artificial transportation scarcity that is most peculiar to Monday mornings from experience and repeated observations as other days of the week experience lighter traffic and minimal rush hours.

Some evenings often have its own slice of traffic as commuters jostle to get home after the day’s work. Some major BRT bus stands/terminals get filled up, from C.M.S, Costain, Barracks, Stadium, Ojota, New Garage, Palmgrove, Obanikoro, Fadeyi, Idi-Oroko, Maryland, Ketu, Mile12, queues resurface as passengers struggle to go home.

A commuter who spoke to THISDAY lamented the lost manhours she spends while standing in line for a bus. Mrs Chinwe Ezeoke, a secondary school teacher at Oshodi decried the number of hours she wastes while waiting for a BRT bus. Often times, she gets to her school quite late no matter how early she leaves her house to get to the bus stand at Aruna Bus stop in Ikorodu.

On a good day she would get a bus after about 20-30 minutes of waiting in line, while on bad days she could spend up to an hour thirty minutes to about two hours when on the queue. Most times she forgoes sitting down to stand to save time if the bus takes too long in other to meet up with her appointments.

Ezeoke added that she hates having to stand all through the transit as her whole body aches almost everyday from the speed bumps and potholes the driver tries to maneuver on the way, which makes the journey less desirable.

Mr. Obinna Mbajunwa, another commuter who regularly takes the Palmgrove to C.M.S route also experiences the same issue as he also stands in line for hours before he gets a BRT bus. Although he saves money while using the BRT, he always looks disheveled any time he is unable to get a seat and has to stand throughout the journey even with the air-conditioning blasting at the highest.

When standing, people are packed so close together you have little wiggle room and most often stands in a spot until people start disembarking at various bus stops which is often not the case especially when you enter a BRT bus that is going straight, it rarely makes stops like the Costain to Ikorodu that hardly makes any stop till it gets to Majidun and Ogolonto before those passengers standing can get any few respite from being on their feet and getting a seat when someone disembarks.

But to Miss Endurance Evulukwu using the BRT is always a welcome idea anytime no matter the hours spent in a queue. According to her, she would rather stay in BRT buses instead of using ‘danfos’ rickety buses who at the slightest spike in traffic hike up bus fares through the roof with out pity.

In danfos, passengers are squeezed four in a row on rickety seats. Commuting from Agric to CMS using the BRT Bus Transit would cost you N250 while danfos charge as high as N300 to N400 on a good day, meanwhile from Aruna to Ojota with the BRT is N150, danfos charge N200-N300.

Most people patronise the BRT due to price stability and because they have their own dedicated lanes that makes them evade traffic gridlock. Thus, commuters spend less hours on the road unlike danfos and private cars that spend hours just commuting a short distance whenever there is traffic jam.

Although the long queues appear at the close of work and the wait begins, the minute a BRT pulls up the jostle renews irrespective of the queues as some unscrupulous commuters try to cut corners by jumping the iron bars in order to get to the boarding point.

Despite efforts of the Lagos State Transport Management Authority (LASTMA) to tackle this traffic situation which varies between traffic log-jams and dearth of BRT buses, Mondays have remained a nightmare for many Lagos commuters along the popular routes from the hinterland to the mainland and island axis.

A BRT official who did want his name in print, blamed the scarcity on the persistent absence of diesel used to power the buses, rendering quite a number of these buses immobile further compounding the woes of Lagos commuters of possible longer queues, loss of significant manhours and the never ending scuffles at the bus stands/ terminals.

As affected passengers continue to groan due to loss of manhours, analyst expect that the completion of road and rail construction projects on other popular routes like the Agege Motor road; the Lagos-Badagry Expressway; and the Light-rail Scheme and the enhanced Ferry Services on the Inland waterways would help lessen the agony of commuters and ensure smoother, free-flowing traffic and overall transportation on Lagos roads.

Also, going by the key derivatives of the new government in power, traffic management and transportation is one of the areas it intends to address. To address this and other boiling issues, Governor Babajide Sanwo-Olu rolled out a template known as T.H.E.M.E which stands for Traffic Management and transportation, Health and environment, Education and technology, Making Lagos a 21st century economy, as well as

Under traffic management and transportation, he said, “Our plan is to integrate road, rail and water transportation in Lagos to solve the problem of commuting within the metropolis. We will fix all bad roads and expand our road infrastructure. We will complete existing road projects and fix inner city roads. We will improve navigation on our waterways to facilitate water transportation and promote private investment. Part of our plan is to complete the ongoing Blue Line rail project from Okokomaiko-Marina and kick-start the Red line from Agbado to Marina.”

Hopefully, when all the above listed are tackled, it would ameliorate the situation in Lagos.