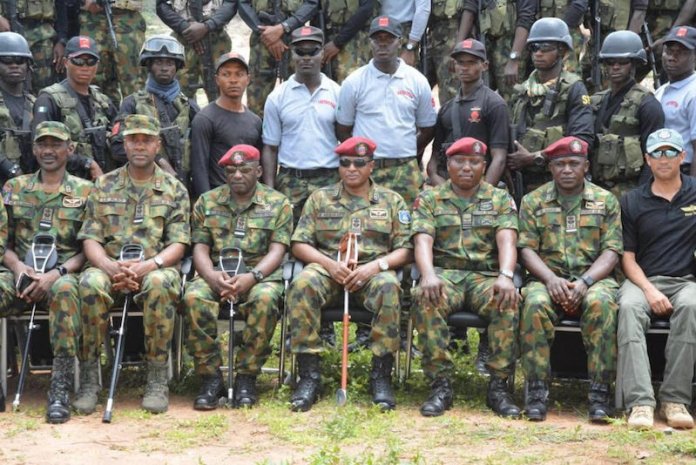 In the past four years, the Nigerian Air Force has relied on the services of the Israeli Four Troops Team to train its Special Forces. Now, it has gradually built capacity to domesticate the training as was showcased during the recent graduation of its second batch, Chiemelie Ezeobi reports

The ongoing efforts of the Nigerian Air Force (NAF) to build added capacity to address the current security challenges in the country were once again boosted as the service graduated its second batch of locally trained Special Forces (SF) Instructors on May 31, 2019. The graduation of SF Instructors Course 2/2019, comprising 51 officers and men, brought the total number of locally trained instructors to 95.

The move, which has saved the nation considerable foreign exchange whilst ensuring the domestication of SF training, is in line with one of the key drivers of the Chief of the Air Staff (CAS), Air Marshal Sadique Abubakar’s vision, that is; “reinforcing a culture of self-reliance and prudent management of resources”.

Speaking during the ceremony, the CAS who expressed delight with the impressive display by the graduands commended RTC’s efforts in producing another set of locally trained SF instructors which, he said, would increase capacity to sustain the training of NAF SF. He noted that the NAF had, in the past four years, relied on the services of the Israeli Four Troops Team to train its SF personnel but had, over the years, gradually built capacity to domesticate the training. He further disclosed that the NAF was poised to increase RTC’s training capacity with the establishment of training centre annexes at Ipetu-Ijesha in Osun State, Owerri in Imo State and Bauchi in Bauchi State to maximise terrain training for the SF personnel.

Commendation
Speaking further, the CAS expressed immense satisfaction with the performance of NAF SF personnel in various internal security operations across the country, including Gusau in Zamfara State, Agatu in Benue State, Birnin Gwari in Kaduna State and Gembu in Taraba State, among others, as well as those operating alongside other security agencies along the Abuja-Kaduna Expressway to ensure security of commuters along the route. He therefore urged the graduands to sustain the level of performance and exhibit the highest levels of professionalism in their future conduct as part of the frontline in the defence of the nation. He equally charged them to maintain and possibly exceed the standards set by their predecessors from the initial instructors’ training course.

Air Marshal Abubakar appreciated the efforts of President Muhammadu Buhari, for giving the NAF the resources and enabling environment to thrive. He equally expressed gratitude to the National Assembly, especially the Senate and House Committees on Defence and Air Force, for their continued support to the service. He also commended the efforts of the Air Officer Commanding Ground Training Command (AOC GTC), AVM Idi Amin, as well as the Commandant RTC, Wing Commander Stephen Sekegor, and his team of instructors that worked tirelessly to mould the new set of NAF SF instructors.

Intricacies of the Special Forces Training
In his welcome address, the Commandant RTC, stated that the current NAF administration, under the leadership of Abubakar, had deliberately pursued the capacity building drive of the NAF Regiment Specialty to better conduct base defence operations in both conventional and asymmetric warfare environments.

The commandant further stated that before now, the SF training had been conducted abroad in various countries such as Belarus, Jordan and Pakistan. However, in line with CAS key driver in relation to human capacity development, the Four Troop Team was employed to conduct training for SF personnel as instructors at the RTC. While giving highlights of the 10-week intensive training programme, the commandant stated that the graduands underwent technical, tactical and basic night shooting; endurance training; dry drills; breaking and entry; discharge from vehicles; running and breaking of covers; convoy movement as well as weapon and ballistic zeroing, amongst others. It would be recalled that the initial SF Instructor Course1/2018 was conducted at RTC in October 2018.

Awards
Awards were given to students who distinguished themselves during the course. Aircraftman Kanu Ihuoma got the Commandant’s Award for placing third in order of merit. The AOC GTC’s Award was given to Corporal Ohanu Emmanuel, who emerged second best in order of merit, while Corporal Abdullahi Isyaku clinched the CAS’ Award having emerged the best all round on the course. The Commandant Armed Forces Command and Staff College, Air Officer Commanding Air Training Command, Commandant Air Force Institute of Technology, Commanders of co-located NAF Units in Kaduna as well as other serving and retired senior officers were among the dignitaries that graced the occasion.

In another development, the NAF has built capacity in force protection. This is because the need for continuous capacity development to meet the evolving imperatives for specialist skillsets, such as Force Protection, required in the ongoing counterinsurgency and anti-armed banditry operations cannot be overemphasised. In line with these imperatives, NAF on June 15, 2019, graduated 707 Regiment and Air Police personnel trained in Force Protection in Complex Air-Ground Environment (FP-CAGE).

In addition to the FP-CAGE Course 8/2019, the combined graduation ceremony, which took place at the Regiment Training Centre (RTC) Kaduna, also marked the completion of the Basic Regiment Officers’ Course 14/2019, Advanced Regiment Airmen’s Course 3/201 as well as the Basic Regiment Airmen’s Course 27/2019. The ceremony, which featured simulation demonstrations by the graduating students, brought the total number of personnel trained in FP-CAGE, since the NAF entered into partnership with the British Military Advisory Training Team (BMATT) in 2015, to 2,872.

Speaking during the graduation ceremony, the CAS, who was the special guest of honour, stated that the graduation marked another milestone in the progress made towards revitalising the NAF Regiment and repositioning the Specialty to play its roles of Force Protection and security of NAF assets. He noted that the inclusion of some Air Police personnel in the FP-CAGE training was another initiative aimed at improving the security of bases and especially the personnel.

The CAS further noted that the current security environment, with its attendant threats and challenges to NAF bases and infrastructure, had brought to the fore the need for the NAF to be able to not just project air power but also adequately ensure the protection of NAF air assets in furtherance of national security imperatives.

According to him, “Our pragmatic approach to training has improved our capacity to secure our Bases as well as critical national assets and infrastructure while at the same time improving the capacity of the NAF to respond to national emergencies and crisis situations”.

While congratulating the graduands for the successful completion of the training programme, the CAS reminded them of the need to remain disciplined and vigilant, whilst always guarding their utterances and ensuring they avoid any acts capable of denting the image of the NAF. The CAS also charged them to abide by rules of engagement when deployed and submit themselves to civil authority as they would be operating at a time when the nation is facing numerous security challenges. He further urged the graduands to keep giving their best in the service of the nation. “Always remember that your duty is to protect all Nigerians irrespective of their ethnic background or religious inclination”, he added.

Air Marshal Abubakar again expressed gratitude to the president for the priority attention given to the requirements of the NAF. The support provided by the Federal Government, he said, had positively impacted on the NAF especially in the areas of training, enhanced operational efficiency as well as improved provision of welfare and other services. He also commended the efforts of the Chief of Training and Operations Headquarters NAF and Director of Regiment as well as the Air Officer Commanding Ground Training Command (AOC GTC) and the Commandant and staff of RTC for their efforts towards ensuring that the aims for which the Centre was established were being achieved.

While also commending the BMATT instructors for their dedication, hard work and commitment to the training package in the RTC, the CAS noted that the seamless execution of the force protection exercise demonstrations by the graduands were a testimony to the collaborative efforts and synergy that has been achieved in partnership with NAF instructors.

Earlier in his welcome remarks, the Commandant RTC, Wing Commander Kehinde Akinyosade, stated that the commendable achievements recorded by the RTC were made possible due to the unwavering support of the CAS and the commitment of the AOCs of GTC and the Air Training Command (ATC). He therefore expressed his profound gratitude and appreciation to the CAS for his keen interest in capacity development of NAF personnel, which, he said, had ensured an enabling environment for the timely, qualitative turn out of well-trained Regiment personnel.

As part of the ceremony, the graduating students conducted an exercise simulating the countering of an insurgent threat to the base by an FPCAGE Team supported by an Intelligence Surveillance and Reconnaissance (ISR) platform. Another highlight of the graduation ceremony was the presentation of awards to students who distinguished themselves during the various courses. Dignitaries that graced the occasion included the Commandant Armed Forces Command and Staff College, AOCs ATC and GTC, Commander Nigerian Army Infantry Corp, Commanders of co-located NAF Units in Kaduna as well as other serving and retired senior officers.